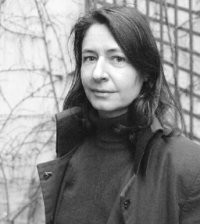 PARIS — Dominique Gonzalez-Foerster may be the artist Nicolas Ghesquière calls “the most inspiring of her generation,” but she’s also one of the art world’s least pretentious new stars.

This story first appeared in the March 20, 2003 issue of WWD. Subscribe Today.

Still, engrossed in a telephone conversation with Huyghe, she doesn’t debate the theoretical intricacies of their cutting-edge work, nor does she speculate on the state of the art market. They brainstorm about where to go later for the best couscous. Having made a name on the international art scene with complex work that explores how individuals relate to their environments, Gonzalez-Foerster is an easygoing type who loves wearing Balenciaga.

As well she should. The 37-year-old artist recently hooked up with Ghesquière to create Balenciaga boutiques in Paris and New York. Their raw spaces bring together natural and synthetic landscapes and provide a radical shopping experience. Beneath images of moving skies spread across the ceiling, the shop floor is filled with boulder-sized rocks and angular arrangements of steel, fiberglass and aluminum that call to mind the architecture of Albert Frey, the Palm Springs modernist.

In fact, the shops were inspired by a trip to California, where the artist trekked through Palm Springs and Death Valley, finding fodder in the barren topography, the endless blue sky — and Frey’s distinctive structures.

“The contrast between desolation and drama in the landscape there is amazing,” says Gonzalez-Foerster. “The relation between the landscape and architecture, and the way it fits into the landscape to create an atmosphere, was very interesting.”

It is unusual for an artist so freely to cross the line separating the rarified worlds of the gallery and the boutique, but Gonzalez-Foerster’s work has always defied easy definition.

Perhaps the most widely known example of that spirit was the Annlee project, which was the subject of an exhibition at the San Francisco Museum of Modern Art that closed this month. Initiated by Huyghe and Parreno, Annlee was a simple manga Japanese cartoon character lent to various artists — including Gonzalez-Foerster, Joe Scanlan and Liam Gillick — who in turn created a narrative around her. With each contribution, Annlee’s so-called personality grew in complexity and depth, until she was destroyed.

“When I get together with someone like Pierre or Philippe, it’s just more new information coming together,” she explains. “That exchange can be the beginning of something very interesting.”

Her work runs from fuzzy travel pictures to films charting city landscapes, from an installation Paris commissioned for its Bonne Nouvelle metro stop to a box-like cement structure Gonzalez-Foerster erected in a park for an exhibit last year in Kassel, Germany. It is not only her love of collaboration, but the range of her work that makes the artist an intriguing figure on the art scene.

“I guess you could call me a visual artist,” she explains. “But I’d prefer to be called a space artist. You see, my thing is space, which is constantly changing by the way people interact with it.”

In any case, Gonzalez-Foerster has no intention of pinning herself down. “I’d feel imprisoned if I stuck to one style,” she says. “Having a signature style, which is the big thing in the art market right now, isn’t my thing. I focus on process rather than product. I can explore the notion of space as equally in a film as in a shop. Each new format is a new opportunity to be an artist, to enlarge the vocabulary.

“Hybrid,” she concludes, “is the most interesting thing.”