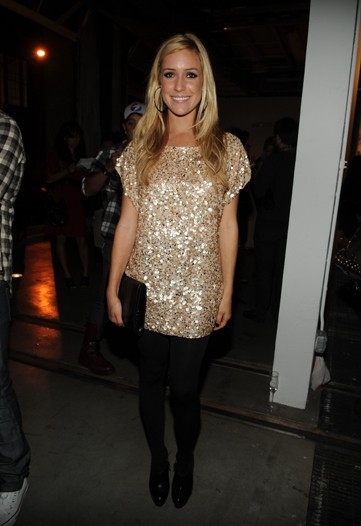 Adam DiVello has plenty of dirt on Lauren Conrad, Whitney Port, Audrina Patridge, Kristin Cavallari and Heidi Montag and her bizarre relationship with Spencer Pratt, but the creator and executive producer of MTV’s hit reality shows “The Hills” and “The City” isn’t about to spill the beans.

He maintains that what you see is really what you get on reality television, and the series finale of “The Hills” Tuesday night closed a significant chapter for the gaggle of Los Angeles youngsters whose lives DiVello has followed for the past five years, ending with Cavallari moving on from longtime love interest Brody Jenner and leaving for Europe.

But he is already moving on to the next project, although he’s mum on specifics.

“People enjoy watching other people’s lives unfold,” DiVello says. “For ‘The Hills,’ there was an aspirational element, but at the core of it, any teenager who is still in high school or college and is wondering what their future will be like can relate.” DiVello started his career at MTV in 1997 as a personal assistant in the network’s video tape library. He quickly worked his way up, eventually producing shows such as “Spring Break” and developing “Room Raiders” and “Say What? Karaoke,” among other programs.

When Liz Gateley, his boss at the time, suggested a reality show centered around a California high school — a sort of “Beverly Hills, 90210” for the reality TV generation— DiVello jumped at the chance. The show, “Laguna Beach: The Real Orange County,” followed the lives of a group of suntanned and spoiled frenemies, turning Conrad and Cavallari into tabloid mainstays. DiVello eventually started his own production company, and pitched the network “The Hills.”

“I wanted to take Lauren and follow her to Los Angeles,” DiVello recalls. “She wants to be a fashion designer, and I thought it was so aspirational, this little girl from Laguna Beach who always wanted the boy but always lost him to the bad girl. She was kind of every girl.”

And the rest is reality TV history. “The pieces all came together perfectly,” DiVello says. “Lauren had met Heidi at fashion school in San Francisco, and Heidi was looking to move to L.A. I had found Audrina by the pool in their complex. Whitney Port was an intern at WWD, and had applied for an internship at Teen Vogue.”

After shooting the pilot, MTV gave a green light to the project, and Anna Wintour agreed to allow the camera crews in Teen Vogue’s Los Angeles offices, where both Conrad and Port were interns. “Before you knew it,” says DiVello, “Jason Wahler came back into the picture, and a season later, Spencer came into the picture, and their lives just started to unfold in front of our eyes.”

Nevertheless, “We were surprised that it became such a pop cultural phenomenon,” he says. “You never expect to you will be landing covers of Us Weekly every week, or the cover of Rolling Stone. Luckily, Lauren was a character America knew, and she was magic. Everything that she felt was on her face. We didn’t need the confessionals. You really knew what she was thinking by looking at her.”

DiVello claims Conrad’s emotions were real and raw, not scripted. “It is all based in reality and it is their reality,” he says. “We don’t come up with characters. We have a story team that works on the show, and they talk to the kids constantly, and they are always BBMing and texting with them. They always know what’s going on in their lives, and we choose what we do and don’t want to follow.

“If someone is getting their wisdom teeth out that week, it’s probably not something we want to follow,” he says. “But if she is having her wisdom teeth taken out, and has some huge event she has to go to that same night and has to miss it, then it becomes a story…People ask me all the time if we write it, and my answer is always that we write it in the edits.”

As for the made-for-primetime boyfriends — Brody, Justin-Bobby and, most toxic of all, Spencer — they naturally and quite fortuitously came into the picture.

“We would never tell [the girls] whom to date, and whom not to date,” DiVello says. “This is all them, and in the situation with Audrina and Justin, it was such a great, relatable storyline. There is always the one girl who is in love with the bad boy. It was fun watching her grappling with whether she should be with him or not.”

As for the train wreck behavior of Heidi and Spencer, which ranged from her Barbie doll transformation to his newfound faith in New Age crystals, DiVello underscored that their actions were always their decision. “People ask me a lot if what they are doing is real, and how much of it we are in the loop,” he says. “I say, ‘We show up and shoot.’ We never know what’s really going on. We were lucky enough to get Heidi and Spencer’s wedding on tape and we watched the evolution of that relationship…[Heidi and Spencer]…have probably been through the most media wise, and that changes people. They were living their lives on the show and in the media. I don’t think you can come out of that unchanged.”

But when it comes to the (slightly) more grounded members of the cast, Lauren and Whitney remain the break out stars. “Lauren is a very smart girl,” DiVello says. “I think that one day she will be a great producer herself. She gets it and has a good handle on the business. She has been very successful with her books and her clothing line. Whitney was a fan favorite, because she was there listening to Lauren and giving her advice. When she fell down in Hilary Swank’s Oscar dress, everyone fell in love with her.”

Looking ahead, DiVello has been talking with studios about a new scripted concept. He’s started pre-production on the next season of “The City,” and the team is honing in on new locations and cast members. “We end the season with a big cliffhanger for Whitney, which will change her relationship with Kelly Cutrone.”

Speaking of the People’s Revolution chief, she has played a key role in both “The Hills” and “The City,” and her presence has done much to spice up the sometimes mundane world of these twentysomethings. “Who doesn’t love Kelly Cutrone?” DiVello says. “She is definitely unguarded and says exactly what she is thinking. She brings with her this wisdom. She has been in business for a long time. She is the ultimate fairy godmother for these kids. When she sees BS, she calls it.”

After five years, DiVello already knows he is going to miss the cast and crew of “The Hills.”