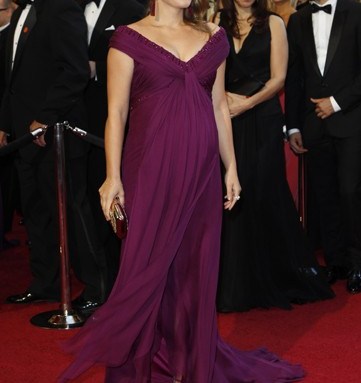 Despite the controversy surrounding the house, Christian Dior didn’t get shut out of the Best Actress race at Sunday’s Academy Awards. Natalie Portman chose to wear Rodarte, a decision apparently made as of Friday morning — though her fiancé, Benjamin Millepied, wore Dior Homme, as did Jude Law. Dior Beauty ambassador Sharon Stone floated by in a black bias-cut Dior gown, declining interviews. But Nicole Kidman made her entrance in a white Dior Haute Couture gown, saying, “It was the first one I put on and I liked it. I’m pretty simple like that.” She didn’t answer questions about the controversy, but by walking the red carpet wearing the designer, her support was loud and clear.

The rest of the actresses showed off a range of looks, from a silver Chanel sheath on Michelle Williams to gold lamé Calvin Klein on Gwyneth Paltrow to black-and-white Armani Privé on Reese Witherspoon. They were three of the tamer ones, though, as color stood out all over the carpet, from Jennifer Hudson’s orange Atelier Versace gown to Jennifer Lawrence’s red Calvin Klein number. Portman turned out to be the leader of the purple pack, followed by Scarlett Johansson’s Dolce & Gabbana dress, Mila Kunis’ Elie Saab Couture and Cate Blanchett’s Givenchy. “What’s not to like about this?” said Williams, who began to twirl around in her gown before stopping short. “Whoa! Someone just grabbed my ass.” She looked up as Blanchett passed by with a naughty smile on her face.

Sandra Bullock found another way to get Kidman’s attention, dropping her clutch at the actress’ feet. “Nicole, now look what you’ve done,” she said in mock exasperation. Last year’s Best Actress winner was a good deal more relaxed as a presenter, saying, “I chose this Vera Wang gown because my son recognizes the color red, so I figured if he saw me on television he’d look at me instead of Gwyneth or Nicole, which is what usually happens.” Helen Mirren chose her Vivienne Westwood gown “because I’m flying the flag to support British fashion. She just opened a store here in Los Angeles so I wanted to show everyone how beautiful her dresses are.” Fellow Brit Helena Bonham Carter wasn’t as selfless when it came to choosing her gown, though it was designed by Brit Colleen Atwood: “I wanted a bustle so I wouldn’t be worried about my bum looking too big.”