The Hollywood social scene has been rather sleepy so far this summer, but on Thursday night, Prada shook things up. 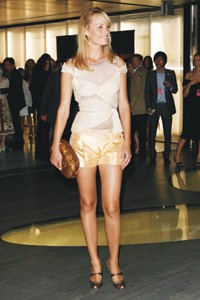 The Hollywood social scene has been rather sleepy so far this summer, but on Thursday night, Prada shook things up by pulling in an eclectic crowd for the West Coast opening of its “Waist Down” exhibit at the Rodeo Drive boutique. “The shirt, it’s good, no?” Dustin Hoffman jokingly asked L.A. legendary doyenne Dani Janssen of his snug brown button-down.

Upstairs, where the lights were dimmer and the music louder, Monet Mazur, Taryn Manning and Amanda Peet made the rounds while LL Cool J wondered, “Who are all these people?” Miuccia Prada glided through the crowd with artist Francesco Vezzoli, who stuck by her side all night. But some, like Kirsten Dunst, skipped the exhibit altogether and just arrived early to Bar Marmont for the not-so-secret after party. At one end of the packed room Lindsay Lohan cuddled in a booth with her man-of-the-moment, Harry Morton, while at the other, Paris Hilton smooched with her ex, Stavros Niarchos. Heather Graham danced with Malcolm Gladwell, and Penélope Cruz chatted with Joaquin Phoenix until nearly 2 a.m.

Hudson, in town to promote her new movie, “You, Me and Dupree” — about a third wheel, played by Owen Wilson, who moves in with a pair of newlyweds — recalled a few of her own challenging houseguests. “Some of my husband’s friends think that nudity is very amusing,” she said. “It’s funny to me, too. But they think it’s much funnier than I do.”

This story first appeared in the July 17, 2006 issue of WWD. Subscribe Today.

Uptown at the Neue Galerie, a rather glitzy celebrity was being toasted: Adele Bloch-Bauer, in the form of a portrait by Gustav Klimt acquired last month by Ronald Lauder for $135 million. Even Lou Reed stood in line to pay his respects to the gilded lady, who, despite the presence of social luminaries such as Samantha Boardman, Eva Lorenzotti and Aerin and Jane Lauder, was by far the most talked-about woman in the room. Barbara Wilhelm had seen the masterpiece before in her hometown of Vienna, but came to take another peek. “It’s different seeing it in a small room instead of hanging in the big gallery,” she concluded, before heading down to Gucci’s Madison Avenue boutique for the house’s 85th anniversary party.

There, several of the art world’s most fashionable ladies were shopping to stock their closets and support the Dia Art Foundation. “I’m going to find a dress,” said Thelma Golden determinedly, as she blazed through the store.

Needless to say, Dia’s chairwoman, Nathalie de Gunzburg, was pleased with the turnout, which also included Lisa Airan and Dayssi Olarte de Kanavos. “Art is becoming fashion,” de Gunzburg reasoned. “Fifty years ago, if you had money, but no art on your walls, it was OK. Today, if you have money and no art, you are a stupid person. It’s a ticket into the social world.” Yvonne Force Villareal interrupted her to explain her own shopping rules: “My policy is, you buy art, you don’t buy jewelry and you borrow clothes.”

Nearby, at the Central Park Boathouse, the Young Friends of Save Venice were hosting a New York version of La Festa del Redentore, a traditional Venetian summer holiday. Co-chairs Adelina Wong Ettelson and Olivia Chantecaille wrangled a range of junior-set types, among them Tinsley and Topper Mortimer and Lulu de Kwiatkowski to raise funds to restore the Doge’s private chapel in the Palazzo Ducale.

A drizzle earlier in the evening meant that most of the guests stayed indoors, but a gondolier was happy to take adventurous revelers for a spin around the park’s lake. De Kwiatkowski, for one, was not to be deterred. “It was great,” she said after her tour. “I liked the fog and the Italian singing. It was very ‘Wuthering Heights.'”