“La Mode Retrouvée,” which runs from Nov. 7 until March 20, 2016, includes treasures from the Paris museum’s archive. 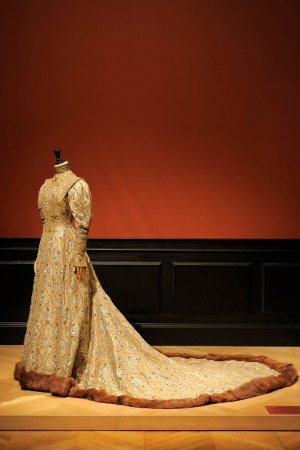 PARIS – What hung in the closets of Élisabeth, Countess Greffulhe — the woman who served as Marcel Proust’s inspiration for the Duchess of Guermantes in his novel “In Search of Lost Time;” lived through the Belle Époque and the Roaring Twenties, and was the leader of Paris’ social swirl for half a century? The first exhibition dedicated to her wardrobe, called “La Mode Retrouvée” (or “Rediscovered Fashion”), is set to open at the Palais Galliera here on Saturday.

Running through March 20, the exhibit culls fashion treasures from the museum’s archives, including some 50 dresses from its collection bearing such labels as Worth, Fortuny, Babani, Lanvin and Nina Ricci. The fashions are supplemented with films, photographs and music tracks plus papers describing her trousseau, identification card and even last will and testament. (Sartorially speaking, Greffulhe specified she wanted, once deceased, to be dressed in a black velvet gown with Venice lace collar.)

The countess became particularly influential after her marriage to the extremely wealthy Count Henry Greffulhe, raising funds, producing and promoting operas, sponsoring science and even dipping into politics.

The show opens in the museum’s Salon d’Honneur with the stunning “Byzantine Dress,” a lamé taffeta, silk and gold yarn and silk tulle gown that Greffulhe wore at her daughter Elaine’s wedding.

“It caused a scandal in 1904: Columnists and gawkers of the time deemed the countess in her dress was more beautiful than the bride,” Olivier Saillard, the Palais Galliera’s director, says during a walkthrough of the dimly lit show.

There’s also the “Russian Cape” that Greffulhe was given by Tsar Nicolas II on a visit to France in 1896.

“She had the ceremonial cloak modified into an evening cape by her couturier, [Jean-Philippe] Worth. It was quite a unique move – to alter a religious gift,” Saillard explains.

Le Figaro newspaper, dated April 15, 1904, reported on how Greffulhe whipped up a lather of excitement when she arrived at a gala sporting the creation.

Another jewel of the show is the tea gown made of blue velvet on green silk designed by Jean-Philippe Worth, dating from the turn of the century. The dress, like many others of hers, was carefully chosen to emphasize Greffulhe’s very slim waist and otherwise slender figure.

“She was a size 36, probably 34 when she was younger. When she was 60, it’s reported she looked 40,” Saillard said. “She was obsessed with her beauty. Her beauty was reported as being melancholic, nonchalant.”

Then comes a room with black dresses – such as a Lanvin evening gown with sleeves embroidered in a latticework of taffeta, or a two-toned, black-and-ivory evening outfit by Nina Ricci – emphasizing Greffulhe’s mystical penchant. There is also the “Jupiter” coat by Lanvin with its brick-like arrangement of rectangles, making the couture piece appear like a Surrealist manifesto.

It took months to restore certain items, such as a black lace bustier.

“It was hanging by a thread,” says Saillard, marveling at the result. “It’s gratifying for our métiers to see such gleaming pieces, not brand new but revived.”

The small East Gallery resembles a dressing room, where the countess’ shoes, hats and fans are displayed, as well as her husband’s hats and suspenders.

Meanwhile, in the small West Gallery are photographs by Paul Nadar’s studio and Otto Wegener, a Swedish photographer favored for society portraits. Photography – rather than painting – mostly captured Greffulhe’s powers of seduction and her narcissism. The poster for the exhibit, which is displayed throughout Paris, shows a photograph by Wegener of the countess hiding behind a coat, for instance.

“She’s hiding herself by showing off,” Saillard sums up.

The West Gallery has a musical vibe, since visitors here will be invited to enjoy the music of Gabriel Fauré, who composed “Pavane” for the Countess, or by Richard Wagner, whom she promoted.

The exhibit ends with a black velvet evening gown with appliqués in the shape of lilies by Worth. There’s also a photograph by Nadar featuring Greffulhe sporting the same dress while gazing at herself in a mirror.

“The 19th-century building of the Palais Galliera was the obvious setting for [the exhibit],” says Saillard. “It’s nice to get into the intimacy of a person through her wardrobe; plus I have always been fascinated by the dialogue between fashion and literature.”

Such authors as Proust, Edmond de Goncourt and Robert de Montesquiou, her uncle, wrote about Greffulhe’s outfits, almost turning themselves into fashion critics while minutely reporting on each detail. Such excerpts are displayed alongside the dresses.

“It’s very rare to have so much literature on somebody’s outfits,” says the museum director.

The show sheds light on Greffulhe’s theatrical public appearances, in a cloud of tulle, gauze, chiffon and feathers, or sporting her kimono jackets.

“Exoticism was in fashion. She liked patterns and favored shades of green,” Saillard says, adding: “Some pieces make me think of Alexander McQueen’s [designs].”

Eight successive donations bequeathed between 1964 and 1992 by the de Gramont family, scions of Greffulhe, were brought together for the show.

The exhibition will be put on at the Museum at FIT in New York in fall 2016, where it will be called “Proust’s Muse.”