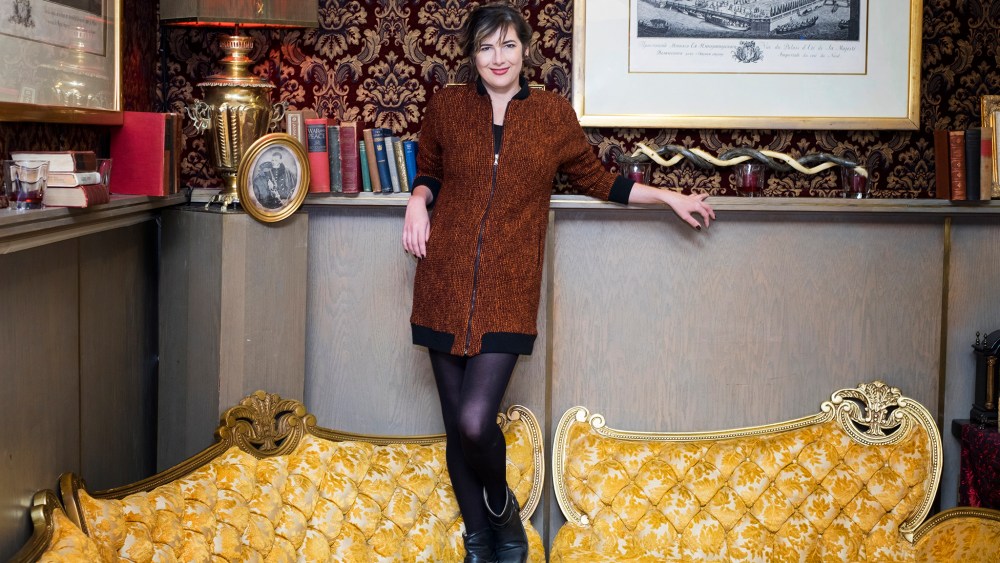 “Natasha, Pierre & the Great Comet of 1812” has made its way up the off-off-Broadway chain and landed at the Imperial Theatre, where it officially opens on Nov. 14. Based on Book 8 of the seminal Russian novel “War and Peace,” the show is an electro-pop musical starring Denée Benton and Josh Groban as the titular characters. The show takes a high-low approach to aesthetics, mixing the dazzle of high-society Moscow glamour with more modern elements of DIY punk culture.

Leading the production’s costuming is Paloma Young, who won a Tony Award in 2012 for her work on “Peter and the Starcatcher.” WWD met up with the young costumer a few days before opening to discuss her approach to the immersive musical as it has made its way from fringe theater to the hallowed halls of Broadway.

WWD: How did you approach the costumes for the show?

Paloma Young: I was brought on for the first full production at Ars Nova in 2012. That was very scrappy — Ars Nova is off-off-Broadway — a tiny budget, just basically enough money to get clothes on people. The show is a musical retelling of a little sliver of “War and Peace” — it’s about 70 pages, so the show is not 3 days long. It’s a really juicy part that takes place in Moscow, so more of the peace part than the war part, but there’s a lot of internal conflict. Our characters exist within Tolstoy’s world of 1812. The music is very edgy, and it’s neither traditional musical theater nor is it particularly 19th-century feeling. There’s electronica involved, and there’s Russian folk, and there are all of these musical styles mixed in.

We started with our principal characters. We wanted to seem like they were stepping out of a period portrait. In a way, it’s creating an image that you see in fashion magazines, like you have a distressed location with a beautiful gown standing in the middle of it. But it wasn’t for aesthetic reasons, it was because the motivations of the characters can seem kind of bizarre to our 21st-century sensibilities. Seeing these characters through the lenses of when they actually lived and were acting helps us to open our hearts to them a little more and forgive them.

Natasha makes a lot of really bizarre choices. Instead of distancing, having a period costume allows you to be more sympathetic with her. Now when I look at Natasha, even though she’s in very period-looking regency ball gowns, I’m seeing a girl in high school that makes a decision that affects her life entirely. And when it goes poorly, she truly feels like her life is over.

WWD: Did you step back to incorporate other periods as well?

P.Y.: As the show grew in size, we started with this core of key characters and then we had the musicians in the space, and the musicians didn’t feel like they should be entirely in Tolstoy’s world. We dressed them in this Russian folky, punky way. When we moved to a tent in [Manhattan’s] Meatpacking District and we started adding a chorus of ensemble characters, that aesthetic let us bring the anachronism that we were already playing with musically and lyrically into the costumes of the chorus. As the show grew, I created a design that was sort of “celestial spheres of period.” In the center you have Natasha and Pierre, and to the untrained eye at least it will look like they stepped out of a portrait in 1812. I make a lot of adjustments — the lines are cleaner and more contemporary.

As you step out from Natasha and Pierre, you get their peripheral characters, wearing pieces that are completely contemporary. Then in the ring that is the furthest out is our chorus — we call them “The Cometeers,” but they are sort of punky, they’re sort of folky, there’s an element of high-low. I definitely was inspired by the Russian aesthetic, which if you look all the way back from the early 19th century to now there are certain things — there’s embroidery, there’s beading, there’s rich colors, there’s velvet, there’s furs — those things are a constant throughout the Russian aesthetic. We took that and mixed it with this Lower East Side Eighties, behind the iron curtain, Seventies, Eighties, Nineties punk rock. Because the punk element really captured the war that was going outside.

There’s lots of references that you’re in this little jewel box of a set. As an audience member, you’re in this set, but you’ve gone through this bunker in order to get to the set. The way the punk aesthetic has militaristic references, has anarchistic references, I took those — so camouflage, bullets and spikes and leather — and mixed them into our Russian folk influences. Even though our characters are very preoccupied with their own personal struggles, on the outskirts and underneath them is the anxiety that comes from existing on the brink of war.

We worked with a lot of thrift-store shopping, and then a lot of alteration to them, which in its own way is a very couture thing to do. They are also the bridge to the audience, so it’s very important that they are wearing things that the audiences recognize are things that at least could have started in their closet. The audience surrounds the characters 360, so the audience is always part of what other audience members are seeing.

WWD: What percentage of the costumes were sourced versus original designs?

P.Y.: For our principals, everything is made from scratch. We buy the fabrics, we have the custom embroidery done, we have the custom beading done. It’s what I think people picture traditional costume design to be: I draw a picture, bring in the research, we talk about it with the draper. So we have that, and then the chorus, which is enormous — there’s 20 of them on stage — there are a few things that we had built, but I tried to stay true to this punk aesthetic. There’s this ball at the end of Act 1, and it is almost entirely black with hints and accents of this acid green. Everything is covered in crystals, but it was important to buy the dresses and then have that DIY, how to sparkle up something that already exists.

WWD: How closely did you work with the actors? Did they give you much feedback about their costumes?

P.Y.: In this particular kind of show, I try to design to the actors’ bodies, and make small adjustments in the things that are built that when I watch their movements I feel like will highlight those movements. For example, Amber Gray, who plays Helene and is somewhat of a villain in the show, has an incredible number called “Charming.” She as an actress for me has birdlike movements — and not those cute little birds, but when you think of “Jurassic Park,” like kind of scary birds coming at you. It’s enchanting and a little bit scary, and I had added these shoulder dangles. Think about if you added a cap sleeve to a tank top and then had a beaded fringe coming off the edge of that. Every time she makes one of those movements, the beads will then amplify those movements and accentuate as an actress what she’s doing already.

With our ensemble, it’s especially important to get the actors’ feedback and actually just sit with the actors. I’d have an initial fitting with the actors where I would just try stuff on. I didn’t buy anything intentionally, I had a whole closet basically and I had them come in and be like, “Oh you have this weird sort of strung out Macaulay Culkin vibe, so let’s try on this T-shirt — oh no this T-shirt is terrible, let’s try on this vest, oh these short pants are great.” A lot of times we come out of those fittings and I have zero percent of a costume for this person, but having tried on clothes together with them, I can take that information back and know exactly what sort of things I’m looking at for them the second time I go shopping. That’s the complete opposite of: I drew it, and then someone made it, and then I put it on a person and then I made slight adjustments.

WWD: Did your costume budget change as the show’s venue got bigger?

P.Y.: There were certain things that I went back and finessed. For Broadway, for our principals, we’ve been able to add custom beading and custom embroidery. A lot of the budget on Broadway goes to laundry. What I mean by that is we’re doing so many shows per week and we have a couple two-show days every week, and these actors are doing incredible calisthenics, like all over the set: they’re running up and down sets, and playing clarinet at the same time, and they’re covered in all of these layers. So we have to have like three bras, three underwear. I do this thing, which drives my producer crazy I’m sure, where the women are wearing tights, and they’re wearing fishnets over that, and then they have a glitter fishnet over that, and then they wear a sock. An actress is wearing four types of hosiery at once, and then we need three of each kind for laundry. It’s incredible how fast it adds up.