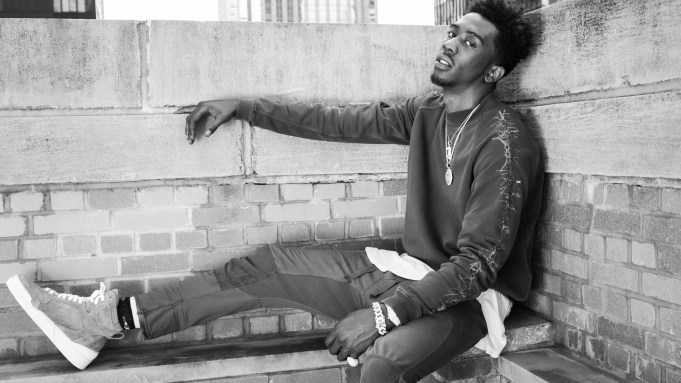 The last New York rapper to land number one on the Billboard Hot 100 was Jay Z with “Empire State of Mind” in 2009. The song was distinctively Jay Z — an ode to New York that charted his rise from Brooklyn hustler to courtside mainstay at NBA games.

Like Jay Z, rapper Desiigner hails from Bed-Stuy, Brooklyn, and his song “Panda” also hit number one earlier this month on the Hot 100. But “Panda” is devoid of anything that ties him to the borough that many rappers proudly call home. Instead, he mentions Atlanta in the song’s hook — a place Desiigner says he’s only visited via an airport layover — and raps in a cadence that sounds eerily similar to Future, an Atlanta rapper whose songs have become pervasive but have yet to land him a top spot on the Billboard charts.

In Desiigner’s defense, the deep timbre of his speaking voice doesn’t sound that different from how he raps on “Panda” — he isn’t feigning an accent, like Aussie rapper Iggy Azalea does. Still, the success of his song has come with its fair share of criticism. But Desiigner doesn’t want to talk about Future, nor does he want to talk about the Justin Bieber incident that made headlines earlier this month — the ornery pop star pushed the lanky rapper because he bumped into him while performing at 1Oak in New York.

“Panda” refers to a car, a white BMW X6 that resembles the endangered species. Desiigner purchased the song’s beat online for $200 from a U.K. producer named Menace, and he recorded and then uploaded the song in December to Soundcloud, where it gained traction and eventually fell in West’s lap — there’s TMZ footage of West and Desiigner meeting for the first time and listening to the song together in a car outside of LAX.

Other than West, Desiigner, who was in between rehearsals for the “The Late Show With Stephen Colbert,” when he met WWD, hesitates to mention any other artists. But it’s hard to tell whether he’s being guarded or diplomatic.

Asked where his musical influence comes from, he says,” [I was influenced by] all types of funk. My daddy and momma are old school. My sister listened to reggae and my homies listened to trap music.” Asked who his favorite rapper is, he states, “I’m my own favorite artist, but I love everybody’s music.” Asked if he has a favorite “Panda” remix — rappers including Fabolous, Lupe Fiasco and Meek Mill have created their own versions of the song — he replies, “I can’t pick out one. I can’t even speak on that one.”

Desiigner — née Sidney Royel Selby III — does offer that his family is from Barbados, he has two sisters and a big brother and he now resides in New Jersey. And while he admits that living in Bed-Stuy wasn’t easy — he was shot at 14 but doesn’t want to discuss the details of that situation either — he grew up in a two-parent home, where he never went without. “I was always on my swag since I was younger,” said Desiigner, who created his alias after his brother-in-law told him to design his name and he added a second “i” for flair. “My mom and pop didn’t play that. I came from a supportive home with a mommy and a daddy and they had everything I wanted.”

The rapper is wearing a new set of sparkling jewelry, including a diamond-covered Cuban link bracelet and a small Jesus piece necklace, a G.O.O.D. Music signature, along with brands he’s just starting to become familiar with: Saint Laurent jeans, Maison Martin Margiela sneakers and a Death to Tennis jacket.

He seems to come most alive during his performances, which can be best described as manic. The rapper energetically bops around the stage while dabbing and milly rocking and showing very little concern for actually delivering his song’s lyrics. “Ever since I was younger I was a performer,” Desiigner says. “I was a ladies’ boy in school, so I was singing to girls and singing ‘Happy Birthday.’ So when it came down to performing it was just natural. It’s just my rhythm, my vibe, my funk.”

But what about his story? Desiigner may be taking lessons on being enigmatic from his mentor West, but his reluctance to reveal more of himself fuels the idea that his song is bigger than him, and makes it harder for him to distinguish himself from the said rapper he is heavily influenced by.

One learns a little bit more about Desiigner from his Instagram account where in a short video he addresses the question looming over his career: Is he a one-hit wonder? “They think I ain’t got another one. You crazy. If I made the first one like that what the f–k you think I got next,” he says into his smartphone.

Next up is “Zombie Walk,” which is also catchy and influenced by trap music. Desiigner has created a dance for it that could resonate on social media. He’s also set to perform next month at Hot 97’s Summer Jam, a one-day music festival and holy grail for emerging and established rappers. Desiigner has never been, either as a spectator or performer, but he’s looking forward to the event.

“Everywhere I’m going and everything I’m seeing now is brand new,” he says. “So it’s just a blessing.”