The artist has 70 new colorful works on display at Perrotin in New York.

Paola Pivi "We Are The Baby Gang"

“When I came to this gallery to see the space the first time, I had this image of many, many, many colorful baby bears,” says Paola Pivi, gazing out at the 70 brightly colored feathered polar bear sculptures situated around the entire top floor of Perrotin in the Lower East Side. “Basically, I saw this; it just came to me.”

The Italian artist imagined the bears in New York, but created them in Anchorage, Alaska, where she lives with her husband, Karma Lama, and son. “We Are the Baby Gang” consists entirely of new work and builds upon her series of larger bears that she’s been creating since 2007. It’s her first show at Perrotin since her exhibition of larger bears opened its former Madison Avenue location in 2013.

“He’s 12, so he’s preteen, and I really feel like these [bears] are also preteen, too; they’re a little bit feisty but also very, very sweet,” says Pivi of her son. She’s also open about the unsweet side of the process — she and her husband spent years battling in court in India to adopt him from a Tibetan orphanage. They went to court 135 times. She describes the process as gruesome before pivoting to a more accurate depiction: “It has been a journey,” she says. “But in any case, our son, who’s been with us since he was five years old, has been this incredible source of energy and life, and positivity. All children are, so this must be connected with him. I mean, for sure it is connected with him.”

Besides the broad inspiration of interacting with child-sized items, Pivi sees the meaning of the bears as open to interpretation. There’s certainly an environmental aspect to consider — the bears, displaced from their natural habitat in Alaska, seek refuge at Perrotin — but even more open-ended is a consideration of each individual bear and what is being communicated through the combination of unspoken gesture and name. “They set a mood, they open doors, these names,” Pivi says. “So they put you in a communication mode. But I think you still have the freedom to think whatever you want,” she adds.

The names were all thought up by Karma, who is a songwriter; Pivi assigned them to the bears as she saw fit. The names have a poetic quality, ranging from the more literal — a bear gazing down at a mirrored puddle is called “Bear Like Me” — to the more dissonant. One standing on its legs is “This Is What You Do When You See Human”; a neon pink bear flipped over mid-somersault is named “I was born this way,” and a blue bear lounging on the ground, modeled after her son, is called “I’m Jetlagged.” It’s easy to anthropomorphize the bears. They even get moisturized; the day before opening, a gallery assistant ran out for lotion mid-install.

“That’s exactly the point of my art: this or in other artworks, it’s something that’s present in all of us,” she says.

While each one is intentional, the group as a whole reflects a quality of societal variety, not unlike the scene of downtown New York waiting outside the gallery’s doors. There is variety in how the bears act and what they prefer, whether that preference is to hang upside down, suspended from the ceiling, or sit, or play with a fellow bear. Pivi sees the concept of freedom reflective in the language of her own practice.

The Perrotin exhibition follows a showing of her larger bears at the Bass museum in Miami during Art Basel, and is concurrent with an exhibition of her work at the Maxxi museum in Rome; the only bear on display there is a faux bear rug. In a room overlooking the street, she installed her experiential mattress work, in which viewers are prompted to crawl atop and underneath two large mattresses. At both the Bass and the Maxxi, the work has set the scene for deep conversations between strangers; it also has a calming effect. By design, viewers are also forced to crawl on hands and knees to experience the work. Pivi shows a video clip on her phone of the security guards racing across the work ahead of the opening. Her work does seem to tease out the inner child.

It’s hard to not smile at the scene of a room packed with colorful bears hanging from acrobatic apparatuses, balancing in yoga poses, or even biting a heeled shoe.

“The people love the bears, always,” Pivi says of crowd reaction to her work. The bears got a particularly kind reception in Miami. “They didn’t damage the bears at the Bass, which is something that happens quite often at other places,” she adds. “They go so close to take a picture or touch them; they just cannot stop themselves from touching.” 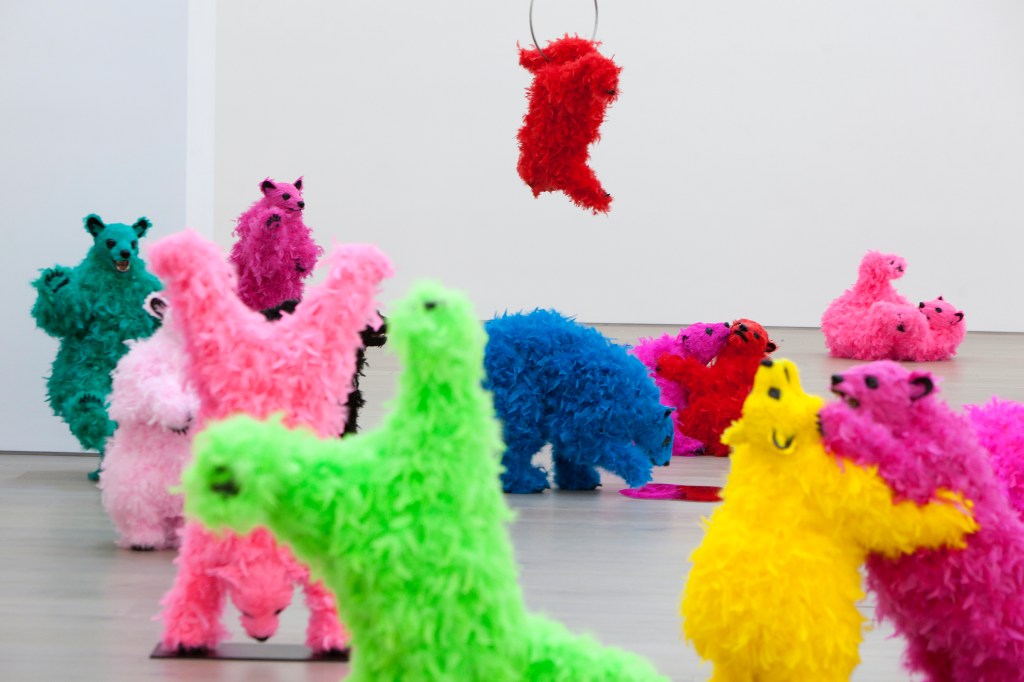 KAWS for a Cause