In her latest flick "Easy Virtue," Jessica Biel plays an unreserved American who clashes with her prim British in-laws-to-be. 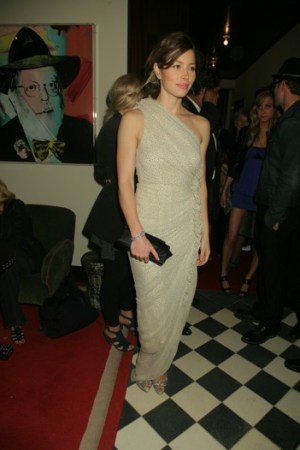 In her latest flick “Easy Virtue,” Jessica Biel plays an unreserved American who clashes with her prim and proper British in-laws-to-be.

But at a screening of the film on Monday, hosted by the Cinema Society, The Wall Street Journal, Brooks Brothers and Jaeger-LeCoultre, the actress offered advice as to how to avoid a similar predicament. “Just be yourself,” she said. “And bring a gift.”

Presumably, Biel has used this tactic at least once before: the starlet’s boyfriend Justin Timberlake joined her on the roof of the Gramercy Park Hotel for the screening’s after party where Sting, Bob Saget, Rupert Everett, Colin Firth and Marc Jacobs had already started festivities.