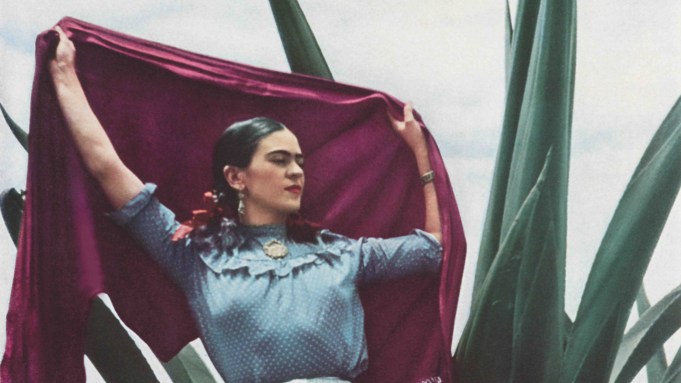 PARIS — A new exhibition in Paris provides a glimpse into the private life of Frida Kahlo, juxtaposing the Mexican artist’s paintings with personal effects ranging from her traditional Tehuana dresses to her orthopedic corsets, and even her bright pink Revlon lipstick.

“Frida Kahlo, Beyond Appearances” opens on Thursday at the Palais Galliera, the fashion museum backed by Paris City Hall, after making its debut in 2012 as the Casa Azul, Kahlo’s birthplace in Mexico City, and making stops in London, New York City and San Francisco in different iterations.

The show, which runs until March 5, features more than 200 objects from the Museo Frida Kahlo, including garments, accessories, letters, cosmetics, medicines and orthopedic aids, including the prosthetic leg with a red leather boot that she began wearing after her lower right leg was amputated a year before her death.

“This exhibition here discusses her construction of identity through disability, ethnicity, her gender identity and her political views,” said Circe Henestrosa, curator and designer of the exhibition and head of the school of fashion at the Lasalle College of the Arts in Singapore.

Many of the objects were sealed following Kahlo’s death in 1954, and only saw the light of day half a century later. Miraculously, many of her clothes survived intact and are displayed alongside the photographs they appear in, including a famous series of color portraits by Nickolas Muray.

“As I was looking at her wardrobe, I was looking at photography and painting to understand her styling and how she was treating these materials,” said Henestrosa, whose great aunts supplied Kahlo with some of the traditional clothing from the region of Oaxaca that she favored.

The exhibition in the basement galleries of the museum begins with a large documentary section that traces Kahlo’s formative years, including the traumatic events that shaped her as an artist: she contracted polio at six, leaving her with one leg shorter than the other, and at 18 survived a horrific tram accident that caused multiple injuries that required lifelong medical treatment.

But just as important was the influence of her parents. From her mother Matilde Calderón y González, who was of Spanish and Indigenous descent, she drew her connection with Mexican traditional clothing, while her father Guillermo Kahlo, who was born in Germany, taught her the power of the image.

“Her first form of self-expression was striking a pose in front of her father, who was a photographer, and we notice how after polio, she becomes introverted,” said Gannit Ankori, an art history and theory professor who specializes in Frida Kahlo and who acted as a content adviser on the exhibition. “After that, she has that serious, intense gaze that you see later in her self-portraits.”

After her accident, Kahlo, who was studying medicine at the time, started painting. One of her drawings from that period shows the scene of the crash in vivid detail, with Kahlo splayed amid the debris, and also hovering above observing the event.

“What she shows here is another Frida, a second self, from the outside, and it’s like the psychological phenomenon of splitting or disassociation, when something happens to you that is so horrible, you kind of disassociate the head from the body,” said Ankori.

“It’s a motif that recurs throughout her life where she shows the two Fridas, or a doubled self,” she noted.

Photographs taken the following year show Kahlo alternately dressed in a three-piece men’s suit and a black knee-length satin dress. “You see that she chooses how to present herself, she strikes the pose to present different aspects of her identity and is highlighting a gender fluidity before that term even existed,” Ankori said.

After marrying Mexican muralist Diego Rivera in 1929, Kahlo grew into her persona. She adopted traditional clothing as a statement of her Mexican identity, but also a way of coping more comfortably with her disability.

“The geometry of the composition of the Tehuana dress allows her to edit herself, because all the adornment is concentrated from the torso,” Henestrosa remarked. “Underneath those beautiful fabrics she will conceal her body, but then she will uncover it bluntly, through her art.”

When Kahlo and Rivera arrived in the U.S. in 1930, she captivated photographers like Peter Juley and Imogen Cunningham with her style. “The attitude toward her was rather patronizing, but she was also mesmerizing,” said Ankori. Film footage from the period shows her climbing down scaffolding as Rivera works and working on her own drawings.

A section created for the Paris exhibit focuses on her trip to the French capital in 1939, where she took part in a group show called “Mexique” organized by Surrealist poet André Breton. Letters and photographs show that although she was going through a crisis in her marriage to Rivera, Kahlo developed closed friendships while in France.

This portion includes never-before-seen items like her passport, address book and ticket for the Normandie cruise liner. But the highlight of the exhibition is the display of Kahlo’s personal effects, including a necklace she made from pre-Columbian jade beads; a bottle of Chanel No.5 lotion, and several items of Revlon makeup, including a tube of Everything’s Rosy lipstick.

“When I went through her personal belongings, I met her for the first time and I found someone who was incredibly sophisticated,” said Henestrosa.

One wall displays Kahlo’s collection of orthopedic corsets, including some that she decorated by hand. In a photograph by Florence Arquin, she proudly lifts up her huipil blouse to show off a plaster body cast with a hammer and sickle painted on the chest, and an unborn baby drawn onto her womb.

“For me, it’s very important to highlight that it was through creativity that she also dealt with her disabilities, that she didn’t allow herself to be defined by these disabilities but she defined who she was in her own terms,” Henestrosa explained. “It’s very beautiful how these corsets become an extension of her body and pieces of art in their own right.”

On the ground floor of the museum, a capsule exhibition running from Thursday to Dec. 31 examines Kahlo’s influence on contemporary designers including Rei Kawakubo for Comme des Garçons, Jean Paul Gaultier, Riccardo Tisci for Givenchy, Maria Grazia Chiuri for Dior and Karl Lagerfeld for Chanel.

The French fashion house, which is supporting the exhibition on an exclusive basis, noted that Kahlo inspired Lagerfeld for his spring 1993 ready-to-wear campaign and an editorial for German Vogue in March 2010, both featuring Claudia Schiffer. Displayed in a slide show at the entrance of the exhibit, the images are sure to stir debate.

“It’s an interpretation. It will be controversial for some people, because she’s a white model and it’s kind of misappropriation,” said Henestrosa. “But the materials exist. The materials are there to be interpreted by the public.”

Known for her wicked sense of humor, Kahlo might have been amused by the idea of a towering German model made up in her likeness, if only because it illustrates the staying power of the myth she created.