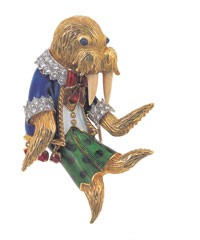 The couture crowd descends on Paris on Monday for three days of fashion and the usual social swirl. Here, a rundown of other attractions the French capital has to offer.

A REAL GEM
The influence of France on American jewelry is the subject of an exhibition running Tuesday through May 5 at the Musée Carnavalet in Paris, spearheaded by Judith Price, president of the National Jewelry Institute and author of the accompanying book, “Masterpieces of American Jewelry.” On display will be 220 jewelry pieces by firms such as Cartier, Tiffany & Co., Harry Winston, Van Cleef & Arpels and JAR. “I think Americans care more for jewelry inspired by inanimate objects, souvenirs and animals than the French,” says Price. “I cannot imagine a French lady commissioning, say, a brooch of a rabbit carrying a martini glass or two large horse busts made of rubies, sapphires, emeralds, diamonds and pearls, as American heiress Barbara Hutton did in 1949.”

CUISINE ART
Celebrated French chefs from the provinces are shaking up the Paris restaurant scene. Up-and-comer Gregory Coutanceau from La Rochelle just took over Le Cou de la Girafe, where he takes a classical approach to cooking with regional products like Challans duck, Poitou rabbit and tasty potatoes from Ré Island. He masters dishes like gambas or sea scallops à la plancha, or a yummy caramel apple crumble. Meanwhile, the Montpellier-based Pourcel brothers have opened their first Compagnie des Comptoirs in the French capital. The 80-seat restaurant serves creative cuisine highlighted with Mediterranean touches, such as sea bass with vegetables and a hot and cold cappuccino dessert. Finally, Drouant is another storied restaurant to be reborn with a fresher, more modern decor and a light, thematic menu. Chef Antoine Westermann, who also runs the three-star Buerehiesel eatery in Strasbourg, created starters and desserts that come in a series of four tasting portions, while main courses are more straightforward, such as grilled scallops or a succulent roasted breast of pork. Known as the annual meeting place for the board that elects France’s prestigious Goncourt literary prize, Drouant’s shag carpets and gray walls have been replaced with a clean interior of gold and white and comfortable banquettes that are sure to resonate with a younger crowd.

MODEL VIEWS
Helena Christensen may be better known as a supermodel than a photographer, but her snapshots are worth a look — on display at Colette, 213 Rue Saint-Honoré, through Feb. 4. Christensen brings a soft, feminine sensibility to her subjects, whether a brooding sky or a duo of innocent-looking kids. Meanwhile, another part-time photographer’s work is on display in Paris: Dior Homme designer Hedi Slimane’s pictures and sculptures are at Galerie Almine Rech. Also of note for art lovers is French artist Xavier Veilhan’s “Sculptures Automatiques” exhibit at Galerie Emmanuel Perrotin.

THIRD EDITION
Perfumer Frederic Malle’s third freestanding Paris boutique will be open by appointment during couture. The new 280-square-foot location is complete with a version of his signature fragrance booths in which people can sample scents, plus a walk-in refrigerator stocking his perfumes.

MIND & BODY
Orlane’s hypnotherapy is a facial designed to combat negative factors contributing to the skin’s aging. It mixes shiatsu (for its positive emotional benefits), alongside a micro peel and a laser treatment, plus the application of the brand’s hypnotherapy antiage cream. The facial lasts for an hour and 45 minutes and goes for 185 euros, or $224 at current exchange rates.

POWER COUPLETS
One of the more intriguing shows during couture won’t feature any clothes at all. Olivier Saillard, a curator at Paris’ Museum of Fashion and Textiles, will present what he’s billing as a “spoken” collection of couture confections on Tuesday at the Galerie Dominique Fiat. What does that mean? Instead of physical designs, Saillard will describe in detail every aspect of each of his imaginary creations. Fashion is his business, but words are his hobby. A few years back he published a book of “shopping” poems.

BLACK GOLD
Pierre Bergé has expanded his Prunier caviar franchise to the Place de La Madeleine. His new Caviar House and Prunier store offers premium French caviar that comes from sturgeons raised in the Dordogne region, delivered to the store within 24 hours of harvest. The store features a special refrigerated (and bulletproof) room where clients can sample various caviars before purchasing it. A cafe is expected to open upstairs in March.