For those who might have a few moments to spare during Paris Fashion Week, here are a few new spots to check out for either imbibing, inspiration or sheer relaxation. 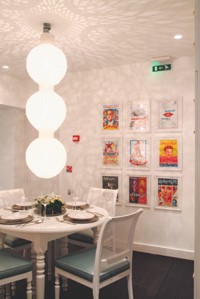 For those who might have a few moments to spare during Paris Fashion Week, here are a few new spots to check out for either imbibing, inspiration or sheer relaxation.

DEAR LIZA
After working at several five-star Paris hotels, Liza Soughayar has cultivated a deep understanding of service and chic — lessons she applied seamlessly to her first restaurant here, Chez Liza, a stylish repair for what might well be the city’s most delicious Lebanese food. The menu changes daily according to the market offerings, and the ambience is coolly feminine, with a decor created by Lebanese artisans under the direction of interior architect Hubert Fattal. But it’s the food that stands out. House specialties include lamb with five spices and an innovative selection of fresh Lebanese starters, such as smoked eggplant and fattouche salad. “I wanted to remain traditional, but with cuisine that was light and modern,” explains the owner.

WHEN IT SIZZLES
The crew that turned Le Baron into Paris’ grooviest bar, attracting the likes of Sofia Coppola and Jarvis Cocker, has a new hot spot — Paris Paris, a former basement cabaret club. It’s slated to open today with Paul Sevigny (Chlöe’s brother) and his band, ARE Weapon, tapped to perform all fashion week long. “We wanted to make it more rock ‘n’ roll than Le Baron,” says Le Baron boss Andre, who only goes by his first name.

ART SMARTS
Paris has always been cosmopolitan. And nowhere is that more evident than in the city’s museums this fall, starting with the “Vienna 1900” exhibition at the Grand Palais — sponsored by LVMH Moët Hennessy Louis Vuitton — that draws on works from Gustav Klimt and Egon Schiele. The Musée d’Orsay has installed a revealing exhibit of late 19th-century Russian art. And the Centre Pompidou is reassessing the Dadaists — sponsored by Yves Saint Laurent — with a major show. Photography buffs, meanwhile, can take in work from the likes of Karl Lagerfeld, Jeff Koons and Allen Ginsberg at the “La Photographie En Parallèle” exhibition at the Maison Européenne de la Photographie.

BIRTHDAY BOY
Who wouldn’t want to celebrate an anniversary with Dior? And that’s exactly how vintage guru Didier Ludot will fete his 30th year in business. Well, almost. Ludot will show 60 Dior pieces from his private collection in what he is dubbing a “couture walk” in and around his shop in the Palais Royal. There will be Dior creations, from the master himself to his protégé, Yves Saint Laurent; John Galliano, and Hedi Slimane. “I wanted to make it modern,” says Ludot. “So I’m mixing past and present to show the enduring codes of the house.” Having opened with a cocktail party on Sunday, Ludot’s show is slated to run for three weeks.