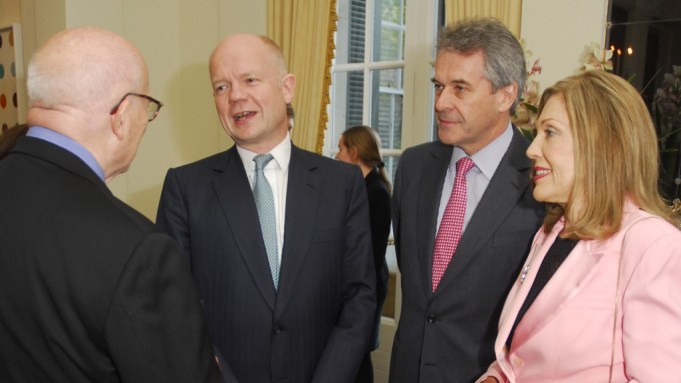 WASHINGTON — First Lady hopeful Ann Romney, who turns 63 today, has a new goal: winning over female voters to help elect her husband Mitt as president in November. And according to Republican pals, she is also working the party circuit behind the scenes to raise money for the battle ahead. Marlene Malek couldn’t resist breaking the news. “I am having a birthday party fund-raiser Monday for Ann Romney, just for women,” she confided at the British Embassy last Wednesday night, adding that at $1,000 a pop, the party is completely sold out. “I’m having to turn people away,” said Malek, adding firmly, “No press” will be allowed at her McLean, Va., home — where her driveway also is too long for enterprising paparazzi to snap supporters.

“Is Sarah Palin coming?” one guest asked at the reception, which was held to celebrate the 25th anniversary of the Smithsonian Institution’s Sackler Gallery. Malek shook her head no. “Last go around, Sarah Palin was always at her house,” the guest whispered.

Washington may be a partisan nightmare these days, but the embassy party was strictly apolitical, with guests working hard to focus on life after the election, namely the Nov. 29 gala to celebrate the anniversary of the Sackler Gallery and launch a break from its Smithsonian Institution big sister, the Freer. “We intend the gala to be the party of the year in Washington,” said Dame Jillian Sackler, whose late husband, Arthur, donated 1,000 items from his collections and $4 million to the Smithsonian to start a new museum of Asian and Near Eastern art in the Freer’s basement. The Sackler opened in September 1987, just four months after his death. In January, Jillian Sackler donated another $5 million earmarked to fund the salary of Julian Raby, director of both the Freer and the Sackler.

As for the British connection, Lady Westmacott, the Washington-born wife of the British ambassador, looking chic in a pink silk Jean-Louis Scherrer suit, explained, “I was a curatorial assistant in 1987 when the museum opened.” Her husband, Sir Peter Westmacott, seemed relieved as he welcomed the crowd near the conclusion of the 90-minute reception. Looking out over a room full of boisterous art lovers, he observed, “Thank you very much. You are all very well behaved.”