The Oscar winner is nominated for her roles in Showtime’s “Escape At Dannemora” and Hulu’s “The Act.”

“It’s surreal and weird,” said Patricia Arquette of her double Emmy nominations. “I mean, I didn’t ever expect it at 51. I really didn’t, and these were kind of risky choices, these parts.”

“I think for a really long time I’ve been wanting to do character work,” she continued inside Los Angeles’ AllBright, the members-only club on Melrose Place that was founded by and for women in London. “Even when I was younger, I really wanted to do character work. People just didn’t want to see a girl doing character work so much, especially if you looked a certain way. If they thought you looked funny, quote unquote, and didn’t fit into their mold, then you could go and do character work. But if you were a little too close to being pretty, then you would just have to be the pretty girl.”

Leading up to the 71st Primetime Emmy Awards, Arquette had just finished addressing a crowd of women as part of the club’s “Women Leading the Conversation” series. In collaboration with Red Carpet Advocacy — an organization known as RAD that uses the platform of the red carpet as an opportunity to spread advocacy and awareness for social causes — the actress discussed her charity, GiveLove, which supplies clean water systems for communities in Africa and South America. Alongside RAD, Arquette partnered with L.A.-based label Michael Stars to create and sell $38 T-shirts with 50 percent of sales going directly to the charity.

“There are so many kids that are dying from totally preventable illnesses because of lack of sanitation and waterborne disease,” said Arquette on the rooftop of the space, as she was getting ready to host a dinner with friends and costars, including “The Act” actress Joey King, who’s nominated for her first Emmy in the same lead actress category. “And so many women are being raped, because they don’t have their own toilet. I mean, we just put in a toilet for this woman, and she was probably 70 years old, and she’s saying, ‘I don’t have to go outside, where they rob you and rape you.’ I don’t want her to worry about getting raped at 70 years old. Maybe that’s the most beautiful thing I could ever do in my life is giving that lady a toilet.” 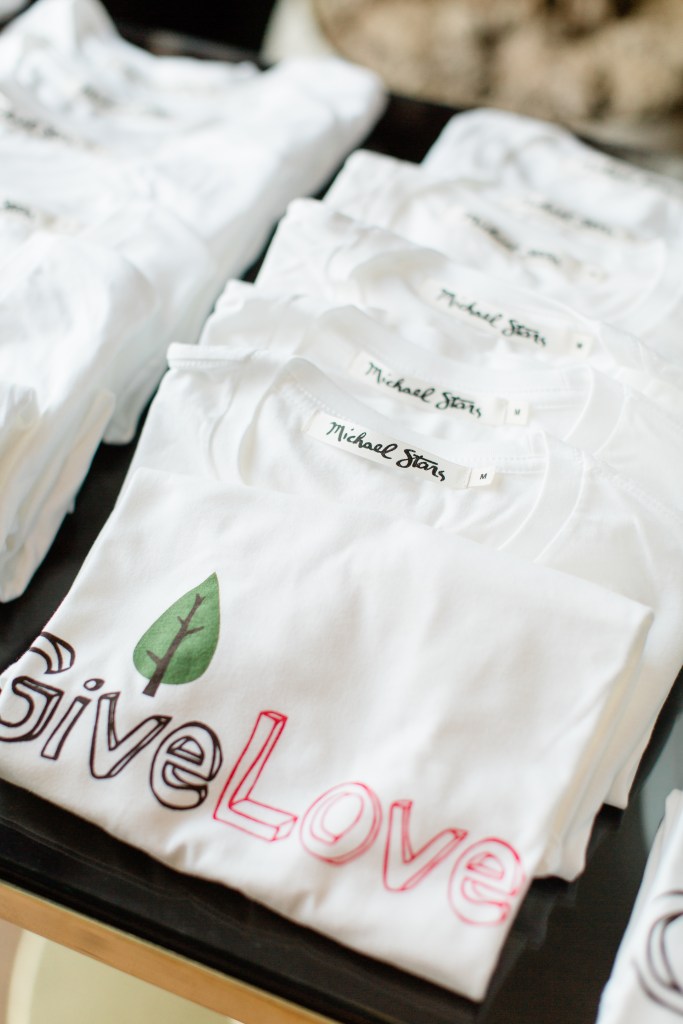 The $38 GiveLove T-shirts, a collaboration with RAD and L.A.-based label Michael Stars. Fifty percent of sales are going directly to Arquette’s charity.  Courtesy

Another event that has stayed with her was working as a first responder following Haiti’s catastrophic 2010 earthquake.

“It was crazy, and I actually kind of had a breakdown when I came home,” she shared. “I mean, we were working places where there were body parts in the rubble all around you, kids running around with no shoes. You would call the authorities to come take parts of corpses away, and they would never come or come and give reports.”

“I didn’t know how to live this life that I live here, especially this life of privilege,” she continued. “Yes, as an actor, but also, we all have pretty privileged lives in America, comparatively, most of us. I couldn’t sleep a lot of nights, worrying about all these kids that I had worked with there, where they were, if they were hungry. It was really hard at first. And then, I don’t know, I guess you just do the best that you can do. And I’m sure I can do better too. But, you know, I have been doing this work for 10 years now, and I love it.”

While the experiences are a far cry from life in Hollywood, and come Sunday, she’ll be amongst Tinseltown’s A-listers, the actress has consistently used her platform — and notably, her award show speeches — to bring attention to causes for women and those underserved.

And it’s likely she’ll take the stage once again (she previously won an Emmy in 2005 for “Medium” as Outstanding Lead Actress in a Drama Series), picking up at least one award on Sunday. She’s a projected winner afterall, after snagging a Golden Globe earlier this year for her role as Joyce “Tilly” Mitchell on “Escape At Dannemora.” It was her second Globe, following her 2015 win for “Boyhood.”

As for her night-of look?

“I haven’t tried it on yet, so I’m going to try it on tomorrow,” she said of her ensemble. “I’m really nervous.”

If it was up to her, she’d be dressed down: “I would wear cowboy boots and overalls. I’m really such a tomboy.”