The stylist is working on several projects, including the new Starz series “Run the World” about four female friends.

By Rosemary Feitelberg on September 16, 2020

Stylist Patricia Field will be doing what she can Friday to keep the spotlight on New York fashion.

While this season’s virtual brigade has turned their attention overseas, Field’s ArtFashion gallery will be showcasing some artists who are represented there by launching a video at 1 p.m. via her Instagram TV @Patricia Field. Jody Morlock, Scooter LaForge, Studmuffin NYC, Madly Made, Seks 5th Ave and Dope Tavio are among the artists who will each have about four looks featured.

Although New York Fashion Week officially wrapped up Wednesday, Field said of her creative contribution: “I’m looking forward to it actually because this was a new experience for me to do something virtually. It was an opportunity for me to be a part of it in a way by introducing my art and personalizing it.”

Located on lower Broadway, the Patricia Field ArtFashion gallery has reopened and is welcoming weekday visitors.

The unstoppable stylist reconvened with producer Darren Starr, who tapped her for “Sex and the City” years ago, to style the Netflix-bound show “Emily in Paris,” starring Lily Collins, whom Field described as “very good to work with.”

But her priority is on styling the new Starz series “Run the World,” which focuses on the professional and personal lives of four Black female friends. The project appealed to Field because it portrays the women professionally and personally. “It’s more of a vibe of ‘Sex and the City’ or ‘Girlfriends,’” Field said. 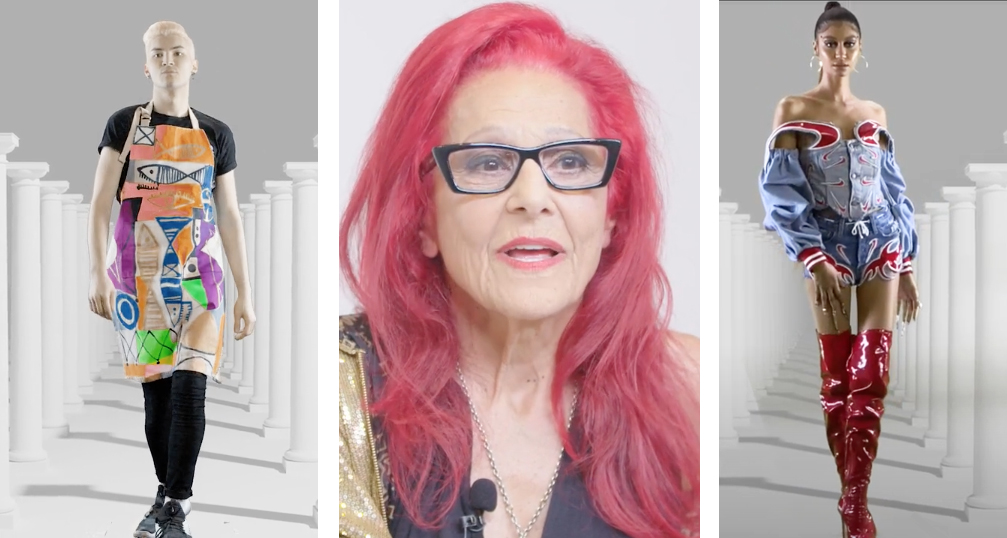 Considering using Chanel, Dior and other designer labels for the series, as well as items from Black designers and other brands, Field said, “I’m glad that Black designers are getting a chance to showcase their work — definitely. What I like about this show is.…You’re seeing four professional gals, their friends, their social lives, their professional lives. It’s positive. That’s why I took it.”

“Black girls definitely have a style of their own. I’m aware of it and I like it. I note it. I mix it in,” Field said. “I’ve always admired Black style because it’s more self-conscious, optimistic and upwardly mobile in attitude.”

The four Los Angeles actresses — Amber Stevens West, Andrea Bordeaux, Bresha Webb and Corbin Reid — who will star in “Run the World” are expected to fly to New York next month. Uncertain whether they will need to quarantine, Field said production may start in about four weeks. In the meantime, she has been scouting looks and doing prep work.

Chanel, Dior and Gucci were among the SoHo stores she dropped into one day last week. With much of Manhattan still yawning back to life after the pandemic shutdown, Field described the street scene as “moderate.” Although she did not see a lot of crowded stores, restaurants were serving and there were some people milling around. Inside the stores, Field (who is routinely recognized) said people were helpful. “I find that people are more willing to work than before, because stores are different. They have to sell. It seems like there was a lot of cooperation,“ she said.

As the coronavirus crisis continues to take its toll on retailers and fashion brands, Field said: “I suppose the ones that can withstand the pandemic will last and the ones that can’t won’t. It’s hard to say.”

One recent casualty: Century 21’s bankruptcy was a blow to stylists, as well as the chain’s die-hard shoppers. “I’m very disappointed about Century 21. What I liked about them was that they had the moment. They went to designers’ showrooms and paid cash. They had things that you don’t see everywhere,” she said. “It’s disappointing. A lot of my colleagues have been texting me, ‘What will we do without Century?’”

Staying in touch with Kim Cattrall through the years, Field said earlier this year the actress flew to New York to shop for her role as the wife of a televangelist on Fox’s new “Filthy Rich” series. Field recalled, “I said to her, ‘You know, people want to see Samantha so let’s give them the glam. You don’t have to look like, I don’t want to say dowdy. You don’t have to look boring, c’mon.’ Anyway, we did some shopping.”

Committed to other projects, Field connected Cattrall with her very good friend and colleague Danny Santiago. “I explained to him the whole thing. She’s very happy and he completely gets it,” Field said. “He’s been mailing her clothes. It’s working out. I’m happy about that.”

Field’s strongest bond to the team from the winning Nineties-era HBO series is with the show’s creator. “I’m very close with Darren Starr. I love him. He loves me. Our relationship started with ‘Sex and the City.’ We did ‘Emily in Paris’ together. That was his project,” Field  said. “He always calls me, when he has something. I love working with him. I respect him not creatively, but he’s a great businessman. He got us on Netflix. I know he was negotiating for a while, because he wasn’t happy with anything that was coming his way. He held out and he got Netflix, so I’m very happy about that.”

Reiterating Starr’s creative and business prowess, Field added, “I love Darren. He’s cool, he’s mild and he’s calm, which is a plus.”

Considering that millions still associate Field with dressing Cattrall, Parker and their costars Cynthia Nixon and Kristin Davis on “Sex and the City,” it’s not surprising that some still inquire about the likelihood of another feature film. “They still want it. I can tell you that much,” she said. “But I’m not a producer. I just dress the gals.”