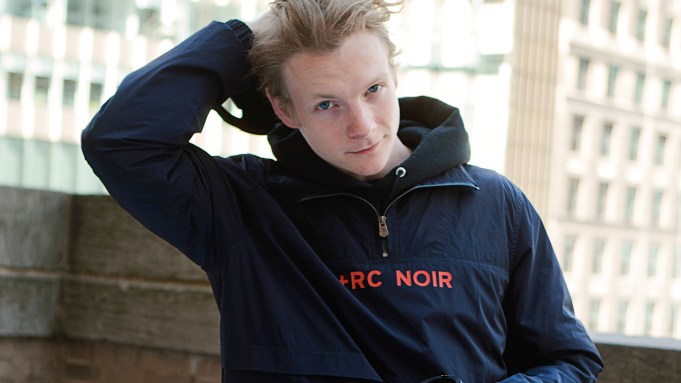 “It’s really surreal to be back,” says Patrick Gibson, surveying Fifth Avenue from a balcony overlooking Bryant Park. “I filmed here for six months. I really got the hang of it. Whenever I come here, it doesn’t feel like I’m in New York.”

The 22-year-old Irish actor looks right at home in the Manhattan landscape, wearing a mix of buzzy streetwear — a M+RC Noir windbreaker pulled over a hoodie, Louis Vuitton belt slung low on a pair of black jeans, a coordinating black baseball cap — and clutching a cup from a local coffee shop.

But his ability to buy coffee incognito may soon change.

Gibson has been breaking onto the scene this past year mainly through a string of recent TV roles. He appeared in buzzy Netflix original series “The OA” in December, followed by roles in “Guerrilla” and “The White Princess,” which wrapped its season on June 4. “I actually shot ‘The White Princess’ and ‘Guerrilla’ simultaneously, which was really mad,” he says. “I was doing an English accent and riding horses and learning to sword fight, and then going to being someone from the [Irish Republican Army] in London.”

When asked about some of his dream directors to work with, the fresh-faced Gibson, who goes by “Paddy,” name-drops Denis Villeneuve, Harmony Korine and Ben Wheatley. “I think the one time I ever skipped school — I felt like a real badass, I had a 50cc moped — and I think we were supposed to go to some, like, college prospectus day. And I went to the cinema [instead],” he recalls of seeing Wheatley’s 2011 film “Kill List.” “I went into this dark space at 2 in the afternoon, and I was just so blown away by how unique and different it was.”

It wouldn’t be the only time that Gibson would prioritize drama over conventional schooling — he dropped out of university in Dublin, where he was majoring in philosophy, to shoot Netflix’s “The OA.” He’s had no reason to look back.

While his most recent roles have been on television, he has two film projects set to come out in 2018. He recently finished shooting “In a Relationship” with Emma Roberts and Dree Hemingway, which he describes as a “comedy-drama kind of rom-com. It was really different than what I’ve been used to doing before — a lot of it was improvised.”

He’ll take a darker turn in “The Darkest Minds” as president’s son Clancy Gray, which he is currently shooting in Atlanta. “The story is 99 percent of the world’s kids mysteriously die, and the 1 percent that are left start exhibiting these strange super powers,” Gibson explains of the apocalyptic sci-fi thriller. “Clancy Gray is the poster boy for the fact that it’s possible to be cured of these powers. The government and the adults don’t want the kids to have them.”

Burgeoning actors are perfect bait for the fashion world, and the sartorially inclined Gibson has enthusiastically obliged to the role of sitting front row, including this past January for men’s wear shows such as Lanvin, Balmain Homme and Kenzo; during his time in New York, he also stopped by a Burberry event. While he won’t be attending any shows this men’s collection season — he’ll be in Atlanta filming — expect to see much, much more of him.

“I’m definitely really interested in fashion, and I don’t know why or where it came from, but I’m also very much focused on acting as well,” he explains, already keyed into keeping the focus on the bigger picture. “Nothing is ever going to compare to doing a scene with someone and kind of forgetting yourself for a minute.”