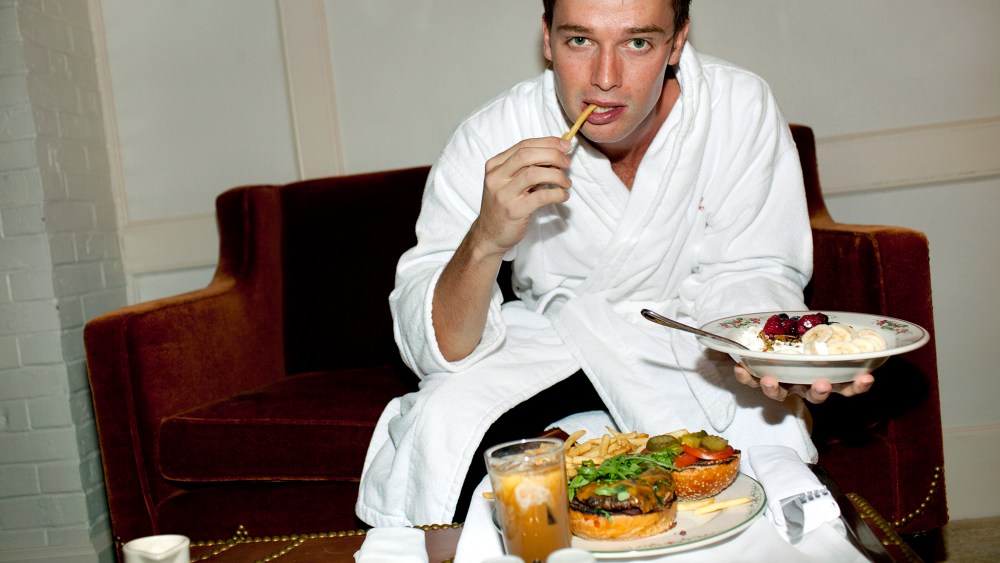 Patrick Schwarzenegger is in the bathroom, cloaked in nothing but a hip-hugging towel, and though making conversation remains focused on the task at hand: shaving. His clean-shaven face (and soon-to-be Tom Ford-dressed body) are due uptown at the Park Avenue Armory in a matter of hours, where he’ll sit front row for the designer’s NYFW:M show. But first things first for the “Terminator” scion: a shower, a shave and some room service.

Schwarzenegger, the 24-year-old son of Arnold Schwarzenegger and Maria Shriver, is immediately warm and welcoming, and exudes the comfort in front of strangers that most similarly green actors develop with time (a childhood in the spotlight likely helps with that). He comes out of the bathroom and into his room at the Bowery Hotel, where he is staying with his girlfriend, Abby Champion, in black boxer briefs to examine the dusty blue velvet cocktail jacket and patent loafers sent over moments before. The opened Gillette package sits next to a box of Spice Sisters hair product, which he picked up from the nail salon next door upon realizing he left his products in L.A. Once in a robe, he sits down to an iced coffee with almond milk and a bowl of Greek yogurt, picking at the french fries he ordered for Champion.

In addition to Tom Ford, whom he was quite up-to-date on, summarizing a recent WWD profile on the designer for his publicist, Schwarzenegger was scheduled to attend the Hugo Boss show the next day.

“Their headquarters are over in Germany and I go over to Germany a lot…my dad is from Austria so it’s great to have connections with a company that is based over in Europe,” he said between bites of yogurt and granola. His stay in New York otherwise will be filled with meetings leading up to the release of his romantic comedy with Bella Thorne, “Midnight Sun,” out on March 23. He calls the film his “first rendezvous…almost” in the acting world.

“I have a girlfriend, so she makes me watch all the romantic movies and stuff,” he says. “I read this right after ‘The Fault in Our Stars’ came out. I love that movie, and I love Ansel [Elgort]. Bella Thorne was already cast as [the lead] Katie so I did the first round of auditioning and then the second, and then there were the chemistry tests with four guys or something. I was friendly with Bella but not good friends…I messaged her and I said, ‘I know people probably don’t do this, but I’m coming in for the chemistry read for this movie that you’re doing, would you come and meet me and we do all the scenes?’”

The love interest role is one of many he is angling to play. “I always try to do a set of goals that I want to accomplish every year, and within it is a work goal,” he says. “I’ve always wanted to play a soldier, or portray a character in a film that’s based on real events. Obviously I’m not signing up for the army or in the army, but to try and get a grasp of the slightest idea of what they’re going through was always something I wanted to see. They’re probably the people that I respect the most in our country, people who sacrifice their lives to protect us. When my dad was governor he went on trips to military bases and he would bring me; I was always fascinated with it. A lot of the California Highway Patrol that worked with us were former military members.”

He spent the summer living on the military base at Fort Hood for the National Geographic series “The Long Road Home,” based on the true story of the third cavalry of Fort Hood going to Baghdad on a peacekeeping mission. “I got to meet the soldier that I got to play,” he says of the role. “It was an amazing experience.”

It’s nearing time for him to head uptown for Mr. Ford, which requires a bit of help from Champion on securing his cummerbund.

“With Tom, I think he really nails the men’s suiting and that’s what he’s done for over a decade, and then before at Gucci. When you think of Tom Ford, at least for me, you think of suits,” he says. “When I go to a Tom show, that’s what I’d love to wear.”

On an average day in L.A., he’s more of a black jeans, white T-shirt kind of guy, James Dean and Marlon Brando being his biggest inspirations. “More recently, there are people who I love how they dress but I wouldn’t necessarily dress like that myself. One of my good friends, Justin Bieber, I love what he wears. Then on the opposite side of the spectrum, I think Jared Leto does great, I think David Beckham is great…Conor McGregor I think has really stepped up his fashion game,” he says. “I think it’s cool sometimes when you don’t try so hard.”

And he’s not just in it to look the part. “Personally I love fashion because it lets you be original. It lets you express,” he says. “Especially in the time of today where people feel that they can’t go outside and be themselves, I think clothing is a way that they really can be.”