Virgil Abloh Dies of Cancer at 41

Holiday 2021: A Good Start, But What Happens Next?

Do Gender-neutral Handbags Spell the Demise of the Man Bag?

“In my day-to-day life I’m so casual,” explains the affable actress. “I wear jeans and T-shirts and flip-flops. I generally don’t wear any makeup and just kind of let my crazy curly hair go wild.”

But stepping out of her comfort zone has become standard practice for the 26-year-old — especially when taking on the titular lead role in “Patti Cake$,” which opens nationwide on Friday. In the film Macdonald plays an aspiring white female rapper from working class New Jersey, a broad departure from her suburban Sydney roots.

“When I got the script it really terrified me because it is very, very different than who I am,” she continues. “I didn’t know I could do it, but I loved [the script] so I went for it even though it scared me and there was a good chance of failing. But that’s the journey that Patti goes on and I would love if this movie gives people a little [of that] hope.” 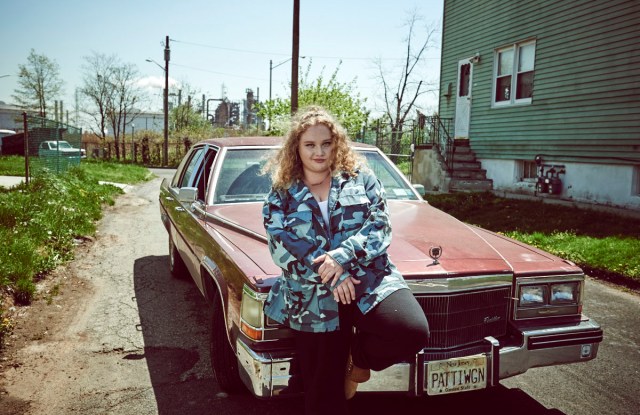 For Geremy Jasper’s directorial debut, which was first seen at the 2017 Sundance Film Festival, Macdonald took on the challenge of learning how to actually rap, a skill the self-described “clumsy Aussie” found nearly insurmountable. “I’m not musical at all,” she says. “To think of something like this where it’s not only musical, but it’s also rap — and I’m not cool.”

Determined to prove herself wrong, Macdonald tasked herself with memorizing and recording songs from artists like Eminem and Dr. Dre with varying degrees of success. “When I finally got through ‘Forgot About Dre’ and managed somehow to not be completely out of breath I was very proud of myself, but I tried one of [Big Pun’s] songs and thought, ‘Clearly I’m really bad at this.’”

Regardless of her lyrical prowess, Macdonald found the “confidence and swagger” of Patricia Dombrowski by embracing the character’s urban-inspired wardrobe, which included a generous amount of camouflage and faux fur.

“The shoes,” she exclaims. “My Timberlands were like my magical shoes. They were my ruby slippers. I put them on and I understood how Patti walked. I wear flip-flops everyday of life, but putting [the boots] on you’re forced to hold yourself a certain way and I was like, ‘Oh I feel cool in these.’ They helped me so much.”

As the photo shoot wraps, Macdonald eagerly trades a pair of chunky-heeled pumps for flat sandals and offers a sigh of relief. “It’s pretty much non-stop now through the end of the year,” she remarks of her increasingly hectic schedule. Next week Macdonald flies to Atlanta to begin filming “Dumplin’” a coming-of-age teen comedy in which Jennifer Aniston plays her former beauty queen mother.

Although the rising star considers “Patti Cake$” to be the most difficult role of her career — at least for the moment — Macdonald recognizes the challenges on the horizon with her latest cinematic endeavor.

“The hard part is I’m learning the Texas accent,” she says with a laugh. “But I do know [the character of Dumplin’] a lot better [than Patti] because I can relate to her more. That also makes it kind of hard. It’s a lot more vulnerable — you’re giving more of your inner, deeper self to a project and it’s scary. At the same time it’s going to be a lot easier to access.”