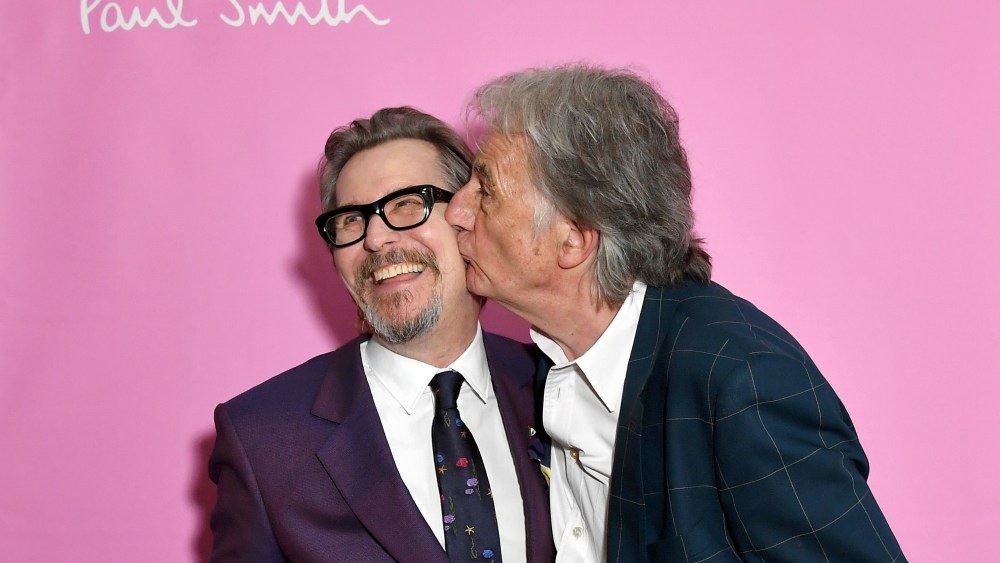 Holding court on the balcony, Oldman enjoyed the company of his wife Gisele Schmidt and sons Charlie, 19, and Gulliver, 20, while singing the praises of his longtime friend. “I’ve been wearing Paul’s clothes since the late Eighties,” explained Oldman. “Back then, I could only afford a tie or a shirt on actor’s wages in the theater. I used to wear secondhand clothes, like old Forties suits. Then I started to make a little bit of money as an actor, not very much, but that’s when I went into the Paul Smith store.”

He became hooked on the designer’s aesthetic. “The clothes were classic English tailoring, but with whimsy,” Oldman said, adding that they eventually met when he “ran into him” in one of the designer’s stores about 10 years ago. “We hit it off,” Oldman said. “I like Paul’s sense of humor and sense of fun. It’s so rare that we’re in the same town because I travel, but my God, he travels! He’s just coming from Tokyo.”

“I arrived last night from Japan,” Smith explained. “I had one of those very long Mondays. You do a whole day in Tokyo, have supper, get on a plane at 11 o’clock at night for ten hours, you arrive and it’s still Monday.”

But it wasn’t his longest day on record. “I once did 42 hours from Tokyo to L.A. I tend to do very quick trips because I’m so busy,” he said. “Because I’m the owner of the company, the designer, and the boss and we’re still independent. The designer Paul Smith works for somebody called Paul Smith,” he laughed, noting that prior to Tokyo he was in Berlin opening a store.

Of teaming with Oldman for the affair, Smith agreed the evening was to celebrate friendship and his longtime pal’s recent success. “It’s been a pretty smashing year for him,” said Smith, “with a well-deserved, overdue Oscar, and an important birthday, his 60th birthday.”

Their friendship also has a professional tie. Smith consulted on Oldman’s 2011 film “Tinker Tailor Soldier Spy.” “I don’t really know what I did on it,” Smith said. “But I did something. I got my name in the credits at the end.”

Fellow Brit Dan Stevens couldn’t wait to meet Smith. “I’m a huge fan and have been for years,” he said, sharing that the brand has “been very kind in supporting me as I’ve been treading red carpets around the world the last few years. It’s nice to meet the man face to face.”

Stevens also appreciates the brand’s quirky approach. “It’s quintessentially British in that sense,” he said. “It’s classic with a twist. I love his use of colors. He’s playful in that respect and particularly in men’s wear, there’s no reason why men can’t play with colors. Last week at the ‘Legion’ premiere, I wore a really fun pink suit. Why not?” He said his kids get a kick out of it too. “My daughter was very entertained by my shirt tonight,” he laughed.

At the dinner, Edgar Ramirez wore a PS Paul Smith jacket paired with pieces from the designer’s spring 2017 collection. “This jacket, if you look closer, you’ll see it has tweed and plaid. It’s gorgeous,” he said. “Urbanwear is not a trend. It’s here to stay for a long time.” He appreciates Smith’s ability to “interpret this moment in fashion while being faithful to his source of creativity.”

Ramirez said he looked forward to visiting the Paul Smith store on Melrose Avenue for a one-on-one fitting with the designer and his London bespoke team. “Tomorrow he’s going to measure me and he’s going to do a bespoke suit for me,” he said. “Paul Smith isn’t a brand. It’s a whole experience.”

Keegan-Michael Key echoed the sentiment. “Paul is a fashion person who is not a slave to fashion norms,” he said, adding the night had a second draw. “I am a consummate and rabid Gary Oldman fan from way back, like ‘Sid and Nancy’ and ‘Prick Up Your Ears’ in the Eighties. He’s one of the people that made me want to act when I was in high school. I have no idea how I was invited to this thing,” he said, “but I’m quite thrilled.”