After "Gossip Girl," Penn Badgley wasn't sure acting could give him what he was seeking. The show's resident good guy has finally found something substantive by going dark, for Netflix's runaway hit "You."

Penn Badgley played the good guy for six seasons on a little show called “Gossip Girl,” and he was well liked, sure — but there is a different response to his current character: a good guy on paper who, oh yeah, also might seduce and then murder you.

After a spell away from television — and several years wondering if acting altogether was even what he wanted — Badgley is back as Joe Goldberg on “You,” which returns for a second season on Netflix on Dec. 26. The first season, a runaway hit in late 2018, introduced Goldberg as a sweet, sensitive bookkeeper who the innocent Guinevere Beck falls for, only to (spoiler alert) end up the latest of Goldberg’s victims by the end of the season. For season two, Goldberg has decamped for Los Angeles and taken on a new identity, and a new love interest, named Love (yes, actually).

For all the Dan Humphreys in the world, it seems it’s the Chuck Basses — and Joe Goldbergs — who people really fall for. 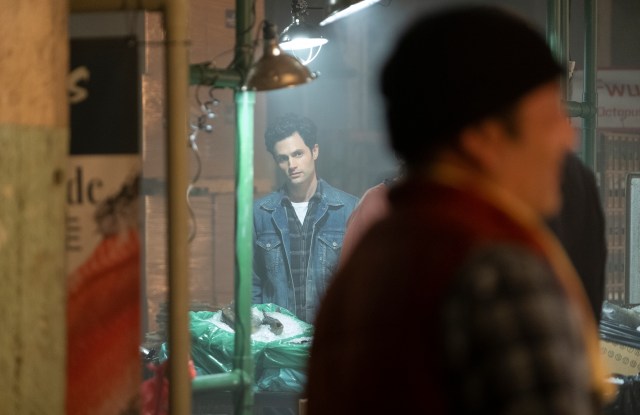 Penn Badgley as Joe Goldberg in season two of “You.”  Beth Dubber/Netflix

“It’s one of the most evident things,” the 33-year-old says, crunching on a bag of Terra chips, after a quest for fruit was unsuccessful. “I mean, some of our most notable actors, who are men, in a way they become most known and revered for playing unlikable people. And it might be only white men who are afforded the freedom to play unlikable people and to find their likability. Whereas I feel like with everybody else it’s the opposite, to some degree. Maybe that’s what a privilege really is. You’re afforded the freedom to be truly multidimensional and people will forgive you. Whereas the way people scrutinize Beck and Candice and Love [the series’ female characters], it’s just very different.”

Being part of a show like “Gossip Girl” — and then stepping away from the spotlight, as Badgley did — can leave an actor with a rather sizable chip on their shoulder. But Badgley is pleasantly unaffected: he’s polite, he’s humble and he’s thankfully intriguingly quirky. He also is incredibly thoughtful when given responses about his work, and honest about what he doesn’t know.

What he has figured out, though, is that people are a bit twisted, and they innately will root for someone as complicated as “You”’s Joe. 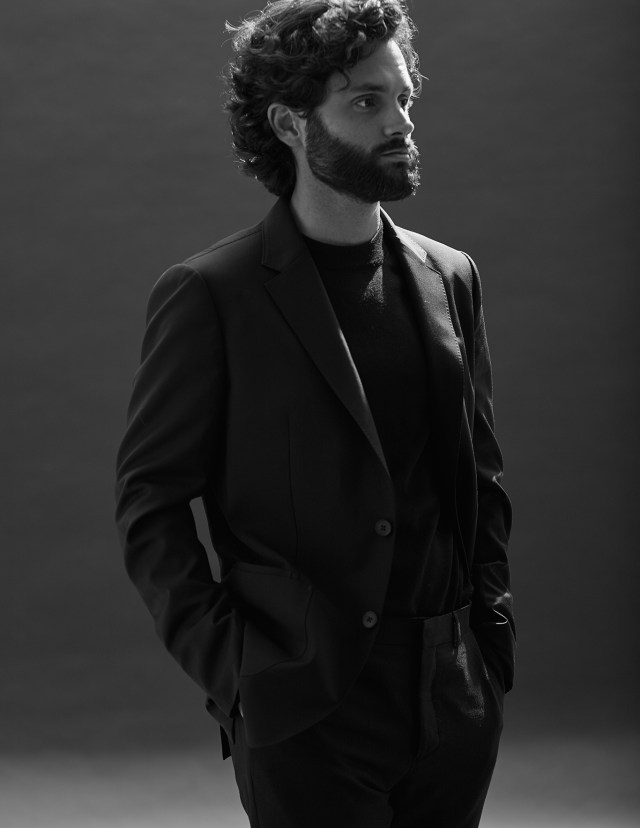 “I think this show does something interesting where it’s playing with a couple of different color palettes,” Badgley says. “In a way, as I’ve said before and as a lot of people have pointed out, there is a certain DNA it shares with a show like ‘Gossip Girl’ or any of them that are like that. It’s highly consumable, it’s fast-paced, and then it shares a little bit of DNA with, while I don’t know what, something else that’s actually quite more disturbing and incisive.”

After “Gossip Girl” ended in 2012, despite the insane success and fame that came with it, Badgley wasn’t all too keen on continuing to act (in part for those reasons: he’s relatively uninterested in being famous, unfortunately for him). He did a handful of independent films — “great casts, great script, great directors, and they all were a bit frustrated by budgets that were a bit too lean” — but was left unfulfilled.

“I think I realized what I was yearning to do maybe wasn’t going to come from the industry. It wasn’t going to be provided by the projects there,” Badgley says. “Save for the occasional exception, which then goes to a Ryan Gosling or someone like that. But even then, I would say it’s not like I saw a bunch of stuff out there that I was like ‘that’s what I wanted.’” 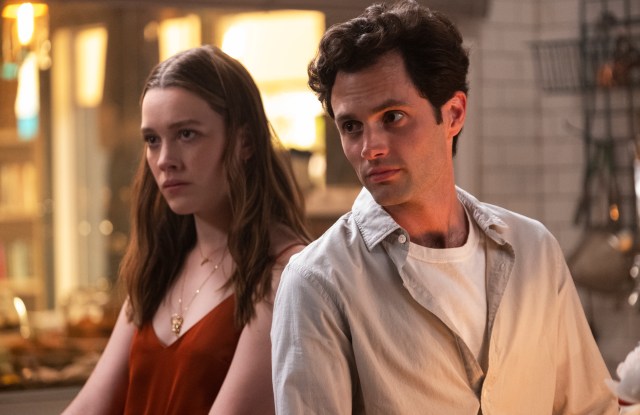 He turned to music for a few years, which had been his career intention prior to “Gossip Girl” (and why he initially turned down “Gossip Girl”), before he and his group, Mothxr, all but “exhausted our well.”

And then came “You.”

“Just as I was open to really wondering what it was going to be, if I was going to have some kind of reentry into the realm of acting, this came along,” Badgley says. “And again, initially I didn’t even really give it much thought.”

Badgley was far from sold at the onset: he thought the book was “a little bit much,” and was more concerned about how walking such a delicate tightrope could be successful: Joe is charming and handsome and the lead character, but he’s also an abusive murderer. So his hesitation was warranted, Badgley says.

“We’ve made him so empathic and emphatic; he’s often so sincere even though he’s insane. But I wasn’t even sure when we were doing the first season, or even the second one, where’s that line between likable and lascivious. Or the line between sincere and delusional. Sometimes it’s quite fine in a way, and apparently I’m walking it.”

Badgley doesn’t sound as if he was so much convinced, but rather just got to a point where the “what if” won out. He was never going to be able to predict how “You” would be actualized, but he was curious enough to try it.

“And it feels fortuitous that it was not this deliberate, ‘let me find the next thing that’s going to be a hit’ [approach],” he says. “The fact that it’s worked that way is kind of strange. Because what it does to me, and the fact that I’m here and I’m in the public eye in a very particular kind of way…it’s a very particular kind of way, to go from ‘Gossip Girl’ to this…I definitely did not plan it.” 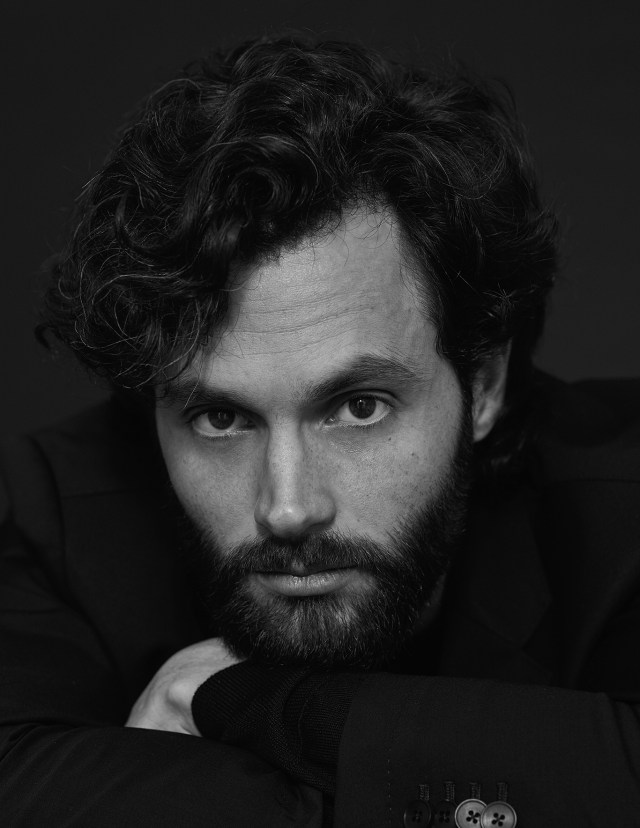 What lies ahead post “You” is, unsurprisingly, a mystery to Badgley; he’s in a few more projects as an actor, including a comedy directed by Billy Crystal starring Tiffany Haddish, but he dismisses them quickly, saying they’re “not substantial roles.” He’s interested in pursuing another passion long on the back burner: writing and producing.

“I’ve always known it was somewhere on the horizon. It’s at least closer,” he says. “But in a way, I almost feel like speaking about it before it happens is maybe not helpful.”

So here he is for now, back at the center of a buzzy, scandalous, highly devourable series, with many of the same admirers he had as Dan Humphrey, now grown up and hungry for something darker, something that makes them think. And back in the spotlight, too. Not by plan, but he’s not resisting it all, either.

“I mean, what else is there to do really?” Badgley says. “It’s interesting. I think it’s very interesting.”