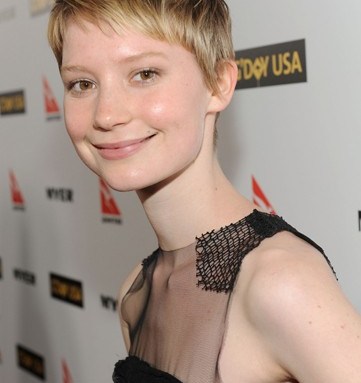 The relatively unknown 20-year-old Aussie, whose most significant gig to date has been as a regular on HBO’s “In Treatment,” is poised to hit the big time in March with her starring role in Tim Burton’s “Alice in Wonderland.” She plays the title character in Burton’s characteristically trippy take on the children’s classic, opposite a slew of stars including Johnny Depp (The Mad Hatter), Anne Hathaway (The White Queen) and Helena Bonham Carter (The Queen of Hearts).

Wasikowska’s career shows no signs of slowing down after that: She’s signed up for an untitled Gus Van Sant project, scheduled to be released next year, and has scored the lead in a big screen adaptation of “Jane Eyre,” also due in 2011.

His foray in politics may have been short-lived, but Italians are enthralled by the television persona of Emanuele Umberto Reza Ciro René Maria Filiberto di Savoia (better known as Emanuele Filiberto, the 37-year-old, blue-eyed heir of the dethroned royal Savoia family).

Having grown up in exile in Switzerland, Filiberto stepped into the spotlight in 2002 when he appeared in ads for one of Italy’s premium food producers, mocking the sweet life of an aristocrat. Then last year, his television career took off when he won the Italian equivalent of “Dancing With the Stars.” Filiberto, who is married to French actress Clotilde Courau, now hosts an Italian television talent show NAME TK, and is expected to sing at the Festival di Sanremo, the country’s biggest and most controversial music concert, in February.

Cécile de France is one of France’s most popular stars. In 2002, she won a César for her role in Cédric Klapisch’s “L’Auberge Espagnole” and was awarded a second one in 2006 for her work in “Russian Dolls.” But now the 36-year-old Belgian beauty has hit the cinematic jackpot, as far as American filmgoers are concerned. She’s shooting Clint Eastwood’s latest directorial effort, “Hereafter,” due in theaters at the end of this year. The supernatural thriller also stars Matt Damon and Bryce Dallas Howard.

Before that film hits the big screen, de France will appear as a cop in the French film in “Gardien de l’ordre (Police Agent)” in March.

Twenty-three-year-old Polly Stenham is bringing her award-winning play “That Face,” which garnered raves during its 2007 run at London’s Royal Court Theater, to the States in April. The story revolves around a fractured, upper middle class family made up of an alcoholic mother, estranged father and a teenage son and daughter struggling to cope with the fallout. In addition to working on the American production, which will run at the Manhattan Theater Club’s MTC Stage at City Center, Stenham is also adapting the drama for the big screen.

Ever since her breakout in the 2006 film “LOL,” Greta Gerwig has been the muse to the “mumblecore” set: a clan of directors like Joe Swanberg and Barry Jenkins who use digital handheld cameras, improvisation and low-budget sets to express the relationship-hopping and dialogue-heavy comings and goings of their twentysomething friends. She has since appeared as a Chicago girl looking for love in “Hannah Take the Stairs” and wrote, codirected, produced and acted in the 2008 “Nights and Weekends” with longtime pal Swanberg. This spring, Gerwig will make a leap to the big league indie world, starring in Noah Baumbach’s “Greenberg” in which she plays Ben Stiller’s love interest.

Noomi Rapace, Swede on the scene

This March, the Swedish actress will star as Lisbeth Salander in the film adaptation of the cult-classic book “The Girl with the Dragon Tattoo.” Equal parts thriller and murder mystery, the book is the first in the “Millenium” series by the late Stieg Larsson — Rapace is slated to reprise her role in cinematic versions of the second and third novels.

As the tough punk of few words, the sweet-faced Rapace, 30, transformed herself with a spiky black hairdo and more piercings than a hard rock band.

But it’s not the first adventurous role for the Hudiksvall, Sweden, native who grew up in Iceland. The daughter of flamenco singer Rogelico Duran, Rapace had her acting debut in the 1996 TV show “Tre Kronor” and has since taken on dark fare like “Svinalängorna,” a Seventies-era domestic drama, and the French action flick “Clean Out.”

Acting since 2004 (her first paying job in Los Angeles was “General Hospital”), the 17-year-old got her first regular gig last year on Disney Channel’s “Wizards of Waverly Place” with Selena Gomez, though her contemporaries may envy her more for her stint on “Jonas” as Nick Jonas’ love interest, Penny. Mendler has now graduated to her own television show, “Good Luck Charlie,” set to debut in April. A singer-dancer-actress who landed an agent by age 11, Mendler fits the bill for a fresh-faced Disney multihyphenate.

Young British actors with rockstar cred seem to be a hot commodity these days (see: Jim Sturgess, Rob Pattinson). Add to the list Jamie Campbell Bower, formerly lead singer of the band “The Darling Buds” and a Select agency model as well. The delicate faced 21-year-old first caught attention as Anthony opposite Johnny Depp in “Sweeney Todd,” followed by a role in Guy Ritchie’s “RocknRolla” and an appearance as one of the ruling Volturi vampires Caius in “The Twilight Saga: New Moon.” This summer he’ll star in “Harry Potter & The Deathly Hallows: Part 1” as Gellert Grindelward, Dumbeldore’s childhood wizard friend with a dash of homoerotica (he also stars in the series finale’s second part). And he’s thrown in a proper English film for good measure — “London Boulevard,” with Keira Knightley and Colin Farrell.

Korean-born and raised in Westchester, N.Y., Chang-Rae Lee, 49, has been hailed by many critics as one of the most talented novelists of his generation. His 1995 debut novel, “Native Speaker,” pondered themes of immigrant alienation and assimilation and earned him a PEN/Hemingway Award. His follow-up, “A Gesture Life,” continued to explore the nature of being an outsider, with a Korean protagonist who spends his life disguising his identity. He chose a different track for the quietly lyrical “Aloft” in 2004: for one, it featured his first non-Asian protagonist and was set in Long Island suburbia. This March brings his fourth effort, “The Surrendered,” an expansive story of two orphans from the Korean War, and the ways in which their lives and love grow over decades and across continents.

Until recently, 30-year-old Travis Lett was the private cook to megaproducer Joel Silver and chef at Asian hot spot Tengu. Now he’s co-owner of Gjelina on Venice, Calif.’s Abbot Kinney Boulevard, and he’s quickly become the restaurant’s main attraction — after his inventive, simple and superfresh fare. But the 6-foot-plus looker isn’t resting on his laurels. He’s quietly started serving vegetarian fare in an unnamed eatery in the second-floor space above Gjelina, and the local foodie rumor mill has Lett considering opening a third spot — likely a pizzeria — on the hip street.

Chef Adeline Grattard, 31, is taking Paris’ culinary scene by storm. Her napkin-size restaurant, Yam’Tcha, opened on a small street near the Louvre in March and already there is a month-long waiting list for a table. Critics and locals alike go for the Franco-Chinese cuisine, a style Grattard developed while working with hotshot Alvin Leung in Hong Kong. Grattard’s husband, Chi Wah Chan, runs the restaurant with his wife and is responsible for the wine and tea lists. Recently, Grattard was named the most promising chef by the Gault Millau 2010 guide and Best Cook by trendy organization Le Fooding. Rumor has it that Grattard may earn her first Michelin star in March.