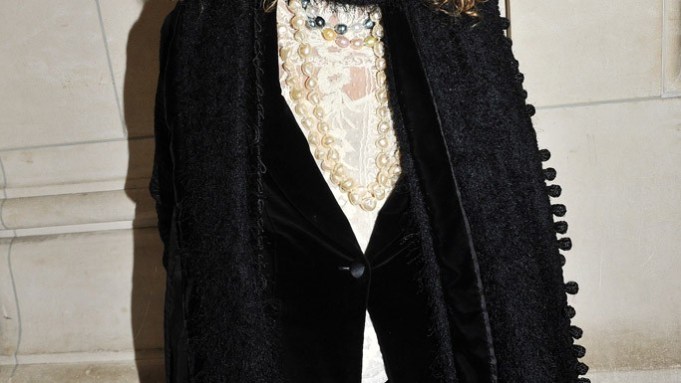 LEATHER WEATHER: After being decorated as a Chevalier de l’Ordre des Arts et des Lettres on Monday night in Paris, Peter Marino lifted his left arm — bare but for the leather straps encircling his bicep and wrists — and pumped his fist into the air as if he were at a football game.

It was a pitch-perfect reaction for the American architect, famous for his growling voice and penchant for skintight biker regalia. The latter had the crowd gathered at Les Arts Décoratifs for the ceremony wondering how French furniture expert Thierry Millerand might pierce his outfit to pin on the medal. “I had a little grosgrain ribbon stitched on the leather belt,” Marino explained to a round of chuckles, referring to the heavy straps that crisscrossed his torso.

During his speech, Millerand lauded Marino for defining luxury retailing via his store designs for Dior, Chanel, Fendi and other elite clients, and for his devotion to France’s artistic riches. A rabid collector, he owns some 1,000 pieces of 19th-century French porcelain, in addition to Renaissance and Baroque bronzes. He also has an eye on contemporary artists including Wim Delvoye, Johan Creten and Jean-Michel Othoniel, and often commissions them to create works for his retail and private clients.

Berenson was dashing out after the event to the waxworks destination Musée Grévin to shoot more scenes in a film Arielle Dombasle is developing about Jean Cocteau. In it, Berenson plays Italian heiress and muse Luisa Casati, among other characters. “It’s very surreal,” she enthused. “And it’s a musical.”