Sam Mendes, Olivia Newton-John and Elton John have received top accolades in what is proving to be a controversial honors system.

LONDON — Matchesfashion.com founders Ruth and Tom Chapman are among more than 1,000 Brits to be recognized in the annual New Year Honors list, which is compiled and issued by the British government. The awards are handed out during the year by Queen Elizabeth II and members of the royal family.

The Chapmans, who will be awarded OBEs, were among the very few fashion and retail winners this year. The Chapmans are being honored for their services to international fashion, and for their role in taking fashion online. OBE stands for Officer of the Order of the British Empire.

“It brings immense pride to have been at the forefront of the changing face of retail, from the humble beginnings of one brick-and-mortar store to one of the foremost global luxury e-commerce businesses, flying the flag for Great Britain in more than 170 countries,” said the couple after the list of honorees was revealed over the weekend.

Peter Saville, the outspoken graphic designer, received an even higher accolade, CBE, or Commander of the Most Excellent Order of the British Empire. 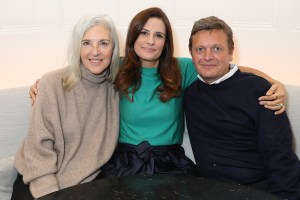 Saville has worked with myriad brands including Burberry, where he designed the new TB logo alongside chief creative officer Riccardo Tisci.

During his long career he has also collaborated with Lacoste, Givenchy and Calvin Klein. During a panel discussion a little over a year ago in London, Saville highlighted the importance of sometimes breaking with tradition.

He said of Lacoste: “They were tyrannized by their own brand identity and it took an outsider to disrupt that, because once you’re inside these corporations it’s difficult to question things.”

The film director Sam Mendes and artist and filmmaker Steve McQueen both received knighthoods, while the actress and singer Olivia Newton-John has been made a Dame, in recognition of her services to the entertainment industry and for her work with cancer charities.

Sir Elton John, already wreathed in accolades, received the highest honor of all, Companion of Honor for his services to music and charity.

The 2020 honors list has come under fire this year for a variety of reasons.

The British government web site accidentally posted the home addresses of the winners, including Olivia Newton-John, Elton John, members of the police force, counter-terrorism officers and Ministry of Defense staff, online, for all to see.

It has since pulled the information down, and issued an apology. There are already calls for an investigation into the breach.

British newspapers have also accused the government of cronyism with regard to some of the honors recipients.

While about 70 percent of honors go to individuals who are doing paid, and unpaid, community and charity work, the rest are given to business people, entrepreneurs, entertainment industry figures, government employees, civil servants and celebrities.

Newspapers, including The Times of London, said some of the New Year honors were undeserved and devalued the hard work and longstanding careers of many of this year’s recipients.

People can make applications for honors, and hire speciality public relations firms to polish and submit them. Potential recipients can also reject honors offered to them: David Bowie and Stephen Hawking famously turned down knighthoods, while Nigella Lawson, John Cleese, Dawn French, Jennifer Saunders and Roald Dahl are among those who have rejected honors over the years.