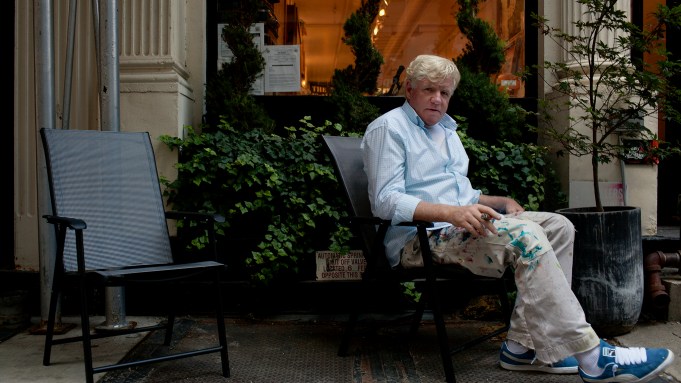 “It takes nine years to put together the canoe trip for your friends in New York,” says Peter Tunney, reclined on a couch in his art studio underneath one of his mounted word collages. “Nine years. You start out when you meet them — ‘oh my gosh, its’ so nice to see you guys, oh my gosh, let’s go on a canoe trip next weekend! It usually happens in about nine years. It takes a long time to put that together,” he continues. “You really have to make time for those things. You’re not going to be given that time, you have to steal that time.”

The 57-year-old artist is a living example of this philosophy. Tunney, freewheeling and energetic, also runs a gallery in the Wynwood Walls neighborhood of Miami (he was one of the now-bustling area’s first tenants, and he also partnered with Jessica Goldman Srebnick in 2015 for the Goldman Global Arts project), and has approached time as art throughout his 30-year artistic career. He’s full-steam ahead, all of the time. Tunney works with a lean staff from his space on Leonard Street, where he has three floors — a gallery on the street level with a studio downstairs and an archive downstairs from that. On a recent afternoon, a couple from Cleveland had wandered in and walked out the owners of a new piece of artwork.

“You’re going to get free gifts and prizes, too,” Tunney tells them. “They’ve won them just because they’re buying artwork.”

Tunney had recently returned from installing his latest exhibition of work in Toronto for a run during the Toronto International Film Festival, where he’s been involved in a charitable capacity with Artists for Peace and Justice for several years. His exhibit, which was up at the meditation studio Mindset Brain Gym, featuring 26 new works; 10 of which had sold before it opened. For Tunney, the process of making art is his meditation. He’s working on new work for Art Basel Miami Beach, among other commissioned projects. (Last year at the Miami Beach art fair, he showed work incorporating reclaimed material from the decrepit Trump Taj Mahal casino.)

“Right now, I just say no to everything because I’m booked until Dec. 23. I literally might have one day where I can do something,” he says. “Malcolm Gladwell says you have to spend 10,000 hours to be an expert — I figure I’ve spent over 25,000 hours making word paintings. That’s a lot. It’s like a whole lifetime.”

Tunney’s work is similarly frenetic, largely dealing in collage and word art. Even his clothes are collaged, a casualty of his spontaneous artistic process. His studio is stuffed with sources and bits of inspiration and future inspiration; walking by a table with a movie poster on it — which might eventually make it into one of his collages — he takes out a sharpie and starts scrawling. “I might burn a hole in it. That’s probably what I’ll do. I’m going to do that now,” he says, pulling out a lighter. And after frantically blowing out the flame creeping up the side of the paper: “That almost got dangerous, right? That went faster than I thought,” he says.

His tag line is “I’m busy for the rest of my life,” and he has plenty of material to pull from. In his archive space, he pulls out a scrapbook from several decades ago. In one bound edition, he found four words scrawled in the margin 10 years after he’d written the entry: “deconstruct dictionary define paintings.” “This one note led me to like five years of production,” he says, describing a few of his pieces inspired by a 1926 dictionary. “And then I said, ‘I’m busy for the rest of my life, that’s one note. What if I open the book again? I’m busy for 100 lifetimes.'”

He certainly has a lot to do — rolls of paper in a corner of the studio represent commissioned work in the pipeline — and a lot that he wants to do. Each piece takes about 10 days to complete, accounting for daily additions and coatings of the work.

“I just feel like there’s a clock in my back, and I’m trying to slow down,” he says of his motivation. “The haunting speed of time I’ll say is kind of baked into all of this. It’s in there, it’s in me, I feel it. I want to get it all in every day. I don’t want to waste any minutes.”