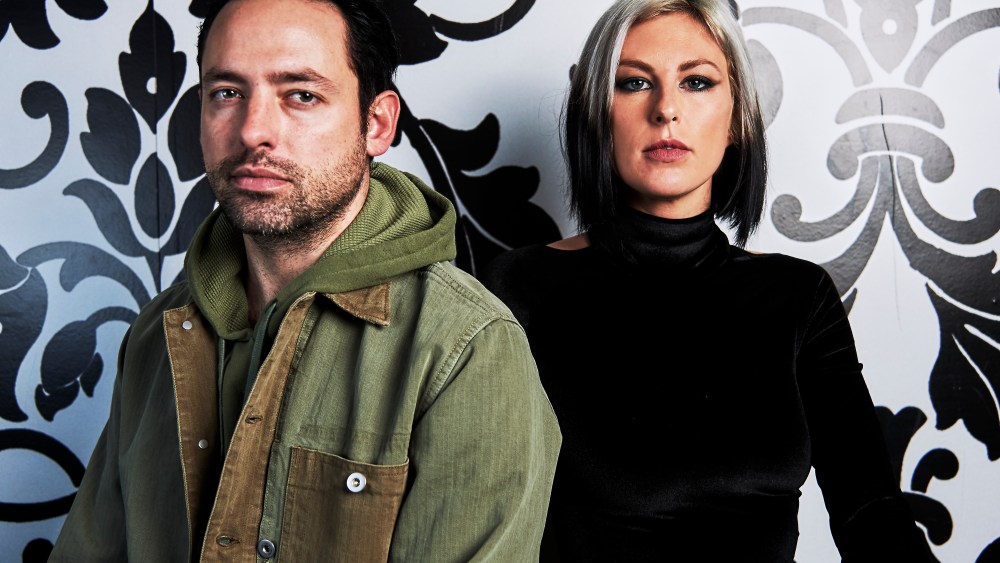 “A beautiful car crash. One of those insane car crashes you see in the middle of the night.” That’s how Sarah Barthel describes the rather grisly inspiration for Phantogram’s latest album.

“It’s pretty unreal when you pass a car that’s burning on the side of a highway,” she continues. She says this so matter-of-factly, it’s uncanny. “You obviously slow down because, I think everyone is guilty of rubbernecking, but also, you just want to slow down and see the moment, examine it because it’s so real. And also because it’s life and it’s sad, but the flames are beautiful in a way. There’s beauty in it.”

Barthel is one-half of Phantogram, the New York-bred duo known for pairing nocturnal beats with melancholy lyrics. The band’s third album is out today and unlike the titles of the ones before it — “Eyelid Movies” and “Voices” — this LP has a straightforward name: “Three.”

“We were going to have three, like, slash marks, but then a couple of other bands already did that this year, so we just decided to name it ‘Three,’” says Josh Carter, Phantogram’s other half. He’s in and out of the phone call; the band is on tour and calling in from Los Angeles, so time is limited.

Barthel says that, like their first two albums, there’s a “similar darkness” in “Three.” That darkness is especially poignant this time around because of the tragedies Barthel and Carter experienced this year.

“My sister passed away,” Barthel says. “My only sister passed from suicide. She was also one of Josh’s best friends. Josh and I grew up together, I actually met Josh through my sister. So, we thought [David] Bowie was bad and then that happened. And Prince passed. One of the lines I think I’m most proud of, lyric-wise, is in the song called ‘Answer.’ It’s basically, ‘All my heroes are gone, but I know they’re out there.'”

The shadowy beats of Phantogram’s music often manifest themselves in the duo’s attire. Barthel, in particular, is known for wearing black “no matter what.” She describes music and fashion as “two ways of expressing your personality in the bigger picture.” But when it comes to the inherent relationship between the two, she fumbles: “To be able to express the outside of your brain, I don’t know the best way to explain it. That didn’t make sense, hold on. Not from, I guess, sonic expression, but not clothing expression, but maybe a term to express yourself. What would that be? You know what I mean.”

Barthel cites Thierry Mugler, Alexander Wang, Anthony Vaccarello, Zana Bayne and Hood by Air as some of her favorite designers, and she particularly loves the way Jeremy Scott combines music and fashion. “I love the energy Jeremy Scott brings to his fashion shows,” she says. “He’s very respected in the music world, too. He always picks the dopest songs and it completely connects to his looks. It’s like a mini music show to me.”

Mark Holmes, Barthel’s stylist, has been working with her to up the glam. “I usually don’t tend to want to branch out to doing some crazy, flashy color stuff,” she says. “Instead, we incorporated a more intense vibe with the clothes where it’s got a little bit of urban goth instead. We love textures and we’ve been using a lot of Zana Bayne body armor stuff with leather straps and…I forget the term. I’m not very good at that stuff.”

On stage, Barthel gravitates toward jeans, a T-shirt, boots and a leather jacket because, well, there’s not much room when one’s on the road. Offstage, she opts for affordable clothing she wouldn’t care about if she lost. Though her on-stage and offstage styles differ, Barthel always likes to maintain “a very masculine and feminine dark vibe.”

Barthel and Carter have played hundreds of shows at this point in their careers. They’re used to life on the road, but that doesn’t mean it’s not tough. “The hardest part of touring is being away from your friends and family,” Barthel says. “Life kinda goes on without you, which is totally normal and fine and I would hope that it would. But it’s always a hard transition to get back home and get back to normalcy ‘cause the road is a lot. It’s a lot of hard work.”