Pharrell on Adidas Collab, Street Style and the Importance of Staying Curious

The multihyphenate artist talked about his collaboration with Adidas Originals and where he finds inspiration for everything from style to music. 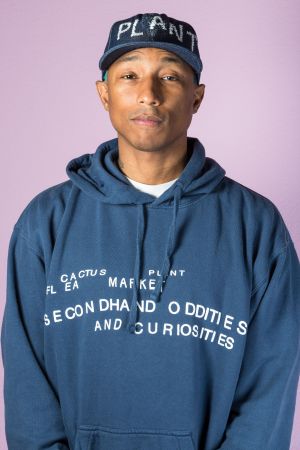 It may have been the pink hue that tinged the sound stage at The Lot studios in West Hollywood, or perhaps it was the puffy faux clouds that hung from the ceiling, but the dreamy setting seemed just the right one for Pharrell Williams to get deep on where he drew inspiration for his collaboration with Adidas and life in general.

The Grammy-award winning music artist, producer and designer — whose name has been linked with Karl Lagerfeld, Comme des Garçons, Moncler and Colette — was on set Friday night at the site of his and Adidas’ launch event to talk the second drop of his Adidas Originals = Pharrell Williams Pink Beach collection.

The first iteration became available earlier this month. The second drop for spring presented a fuller range for men and women along with children’s versions. Friday’s event was also linked to a Snapchat takeover by Williams and a retail pop-up at Nice Kicks in downtown Los Angeles that runs through Sunday.

It all started in 2014 when Adidas sent Williams leather versions of its classic Firebird jacket. He doodled. The drawings were then embroidered onto the jackets, which became the inspiration behind Pink Beach.

“That was a zone out that I was in like elevation, operating on a higher frequency as an individual as much as I can,” Williams told WWD of those initial drawings. “The power of music. The power of oneself when you connect to that most sacred place within yourself, you know? And then we started throwing those ideas around and was just like, man, what if there was a place where everyone just instantly was on that frequency the minute you got there? And that was Pink Beach. It’s just spirituality.”

It’s another level of thinking. For Adidas, the idea behind Pink Beach was about drawing people in.

“Originals isn’t about old sneakers. It’s about culture. And music and our brand have always been closely linked,” said Nic Galway, Adidas Originals creative director, who was in town from Germany for the event. “Pharrell in particular stands for the same values as us. He’s all about positivity. He’s about connecting people and he’s about inclusivity. And that’s really true to our values too and that’s why we wanted to collaborate.”

Williams, who describes himself as curious and ever the “perpetual student,” said he finds inspiration from just about anywhere — whether that be Lagerfeld or strangers on the street.

“[Lagerfeld] is definitely a mentor,” he said. “My style inspiration comes from regular, everyday people. People you see walking down the street or down sidewalks, Whole Foods [or] gas stations. They have the best style. Construction. The more individuality you’ve got — it doesn’t mean you need to be weird, but just be noticeably yourself. I love those kinds of characters. Those are the most inspiring to me because what they wear is perfunctory.”

Technology and social media have certainly helped the ability to discover those individuals much easier, Williams said.

“It was bound to happen. It’s where technology is, so it’s a factor,” he said. “The human race will never be the same and that’s a good thing. This means we’re still evolving so it’s just about what we do with the information that we get. Knowledge is a responsibility. It’s expanding. It’s changing rapidly. Every decade music is completely unrecognizable from the decade before it. Fashion is completely unrecognizable from the decade before it. Design. The culinary experience. It all just continues to evolve.”

As for how the artist’s relationship with Adidas might evolve, Williams was mum in respect to any future collaborations with the German brand.

“When they’re done, that’s when we put it out,” he said. “We don’t hold them in and go, ‘OK we’re going to surprise them with this.’ When we’re done, we just put it out.”