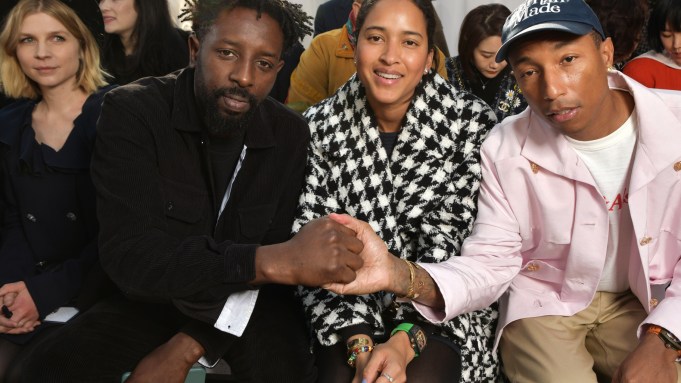 WINTER SUN: The cavernous Grand Palais is never very warm in winter, but it was particularly freezing on the morning of the Chanel spring 2020 haute couture show on Tuesday.

Pharrell Williams was determined to see things on the bright side.

“The sun is cooperating today,” said the artist, who took in Virginie Viard’s show seated next to his wife Helen Lasichanh and French film director Ladj Ly of “Les Misérables” fame.

Indeed, sunlight dappled the bucolic garden created by the Chanel team to reference Gabrielle Chanel’s upbringing in the convent of Aubazine, in the South of France.

“To come into the Grand Palais and have this amazing transformative experience is pretty usual,” laughed Williams, who will be inducted on June 11 into the Songwriting Hall of Fame alongside creative partner Chad Hugo, the other half of The Neptunes and N.E.R.D. “But the difference is that today there are sheets hanging up and you really feel like you’re outside in the garden.”

Contrary to some Chanel ready-to-wear shows, Viard paraded only women’s looks. Would Williams want the house to do more men’s?

“We’re going to leave that up to her,” grinned the artist, who cryptically hinted at “good stuff coming” when asked about his next musical projects, some of them involving music festival Something in the Water. “Remember I was wearing it when there was no men’s stuff,” he continued. “So I don’t really mind.”

Actors Charlie Plummer and Kristine Froseth — who went from being costars in Hulu television series “Looking for Alaska” to becoming a real-life couple — were there, while South Korean artist G-Dragon was showing off all the pins and badges that adorned his pale lilac Chanel jacket.

“I’m kind of addicted,” he said about his embellishments, pointing out a scribble on his black leather Chanel bag as well as flower pins on his lapels.

G-Dragon, whose real name is Kwon Ji-yong, is gearing up for his next musical projects with his band Big Bang after finishing his military service in October.

“We’ll be playing Coachella in April and I’m a little bit nervous,” he said. “But making music and performing is all I can do.” He answered “why not” to the question of going solo again.

Eva Green was sipping a warm beverage to fight the cold, standing under a ray of sun that filtered through the glass cupola of the Grand Palais.

“It’s one of my favorite locations in Paris, there is so much air and light,” said the actress, who praised the “naughty schoolgirl” vibe of Viard’s collection.

She was wearing a set of chunky blue rings by Elena Okutova. “They are my good luck rings,” said the “Penny Dreadful” actress, who will appear in British television series “The Luminaries” about the gold rush in New Zealand this spring.

Next up for Green is “Proxima,” a French film that is going to be released in the U.K. in April. In it, the actress plays an astronaut wrestling between her dedication to her job and her role as a mother. Green had to go through serious physical training for the film, in which she stars opposite Matt Dillon.

“It’s the joy of this job to be able to play superheroes, or characters that you would never meet in real life, like wonderful astronauts,” she said. “And super mothers.”