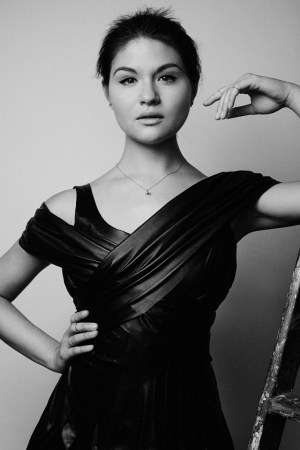 Critics have gone out of their way to come up with new superlatives for a musical that’s only on its surface a portrayal of the first U.S. treasury secretary. Everyone from President Obama (and First Lady Michelle) to Madonna have scored front-row seats to the toughest ticket on Broadway. And somehow on the road to the Richard Rodgers Theatre, “Hamilton” has become the first show since “The Producers” to become a crossover theatrical event, the subject of conversations not just on Broadway but op-eds in Washington for its deft mix of show-biz pizzazz and social commentary.

For veterans like Miranda and Jonathan Groff, who stars in the show as King George III, the hubbub might be all too easy to handle. But also thrust into the spotlight has been a 25-year-old actress with only one prior credit to her name, and she seems to be taking it all in stride.

“My life is just full ‘Hamilton’ right now,” Phillipa Soo says. The actress, who plays Eliza Hamilton, is at a café near the Rodgers taking a rare break from rehearsals just a few days before opening night on Aug. 6. “We’re still working right now. It’s not like, ‘And now we’re here, on Broadway!’ We’re changing lines, we’re re-blocking…”

A Chicagoan who practically grew up on the stage — her grandmother was a concert pianist, her mother worked secretarial jobs in the theater — Soo came to New York in 2008 to attend school at Juilliard — recent Tony winner Alex Sharp was among her classmates. Shortly after graduating, she was cast in the acclaimed off-Broadway pop opera “Natasha, Pierre and the Great Comet of 1812” and gave what the New York Post described as a “star-is-born performance.” In December 2013, she joined “Hamilton” when it was in its earliest incarnation.

“I came to New York for school, and then I did this amazing show that was received very well, with a great group of people, and I felt like I was creating something that I was really proud of, and then ‘Hamilton’ was my next big thing in New York,” she says. “Part of me is like, ‘When is it going to be crap?’ There’s a part of me that is aware that that’s a very special thing, but also I don’t really know anything else.”

From its opening at the Public last November, “Hamilton” has resonated with audiences for reasons beyond its theatrical ingenuity. It’s been praised as an allegory of America’s long struggle with race and immigration, particularly at a time when the two topics are at the forefront of the national conversation, and also for its cast, one of the most diverse ever on Broadway.

“It kind of messes with your whole concept of gender and race. It feels like now. Like, ‘Oh, this is what we’ve been waiting for,’” says Soo, who is Chinese-American. “It’s a nice reminder that being in this country, being an American, means that you’ve come from something else.”

Much like her first big show in New York, Soo has been singled out for her performance — The New York Times called her “fabulous” in an early review — and in particular for her showstopper, “Helpless,” which tells in a single number of Alexander and Eliza’s courtship and marriage.

It is slowly dawning on her that she may be part of one of those original ensembles that’s likely to be talked about for years, a point that was underscored when the actors on “Hamilton” performed “What I Did for Love” in the spring with some of the original cast members of the seminal Public musical “A Chorus Line.”

“A lot of times when people come backstage, they’re sort of stunned,” Soo says. “And I’m like, ‘Don’t worry, I’m on the same boat.’