25 year-old pop singer/songwriter Phoebe Ryan counts Taylor Swift as a fan and just wrapped touring with Charlie Puth; she chats with WWD on her rise in music. 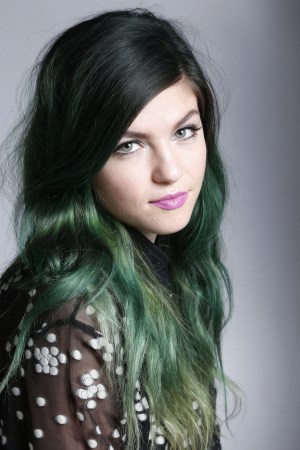 “It’s kind of like an early Twenties crisis,” Phoebe Ryan says. The 25-year-old indie musician, sitting down for a chat a few hours after arriving in New York from Boston’s Brighton Music Hall, is discussing her now-signature mermaid green locks. “I was like, ‘I need to do something different, I need to do something crazy that will make my parents freak out.’”

Ryan is a pop singer-songwriter with, yes, a head full of green hair and, to match, a passion for Shakespeare and the opera, a Twitter shout-out from one Taylor Swift under her belt, and a casual Columbia record deal. She’s set out to make pop music that is distinctly her own. “I’m kind of a tomboy but I can also be very sensitive,” she says. “I just like to get everything about me into these songs.”

Ryan was raised “straight up on the Jersey shore,” and was first drawn to acting but became hooked on music by seventh grade. “My older brother started playing guitar and I was superjealous of him,” she says. “So I started teaching myself guitar, and I listened to a lot of Bob Dylan, and I started doing a lot of Bob Dylan covers in coffee shops — like the most typical things maybe.”

She left the Shore to attend New York University, where she studied audio production, engineering and business, “and eventually I just kind of fell into songwriting,” she says. Ryan has no formal vocal training — aside from a bit of opera singing in her high school days. “When I was studying the engineering aspects of music I was superinterested in it but I realized my friends would call me in to start writing songs for projects and I was like, ‘OK, maybe that’s my strong suit.’ I don’t need to be hiding in the studio behind the desk necessarily, I can be crazy and have a different outlet.”

Her songwriting knack was put to work when she moved to Los Angeles upon graduating. She soon found herself penning tracks for a range of musicians, including rapper Skizzy Mars, folk band Oh Honey and fellow pop darling Bea Miller, for her sensation “Young Blood,” which went on to draw over 12 million views on YouTube. When it comes to crafting her own sound, Ryan’s is a natural mix of it all. “The heart of my sound is pop music, but I think it’s a little bit more left of center,” she says. “At the end of the day I just need to have my personality shine through in a song. I think it makes the music different from other artists because I’m just weird.”

Another artist that happened to find this “weird” sound appealing? Taylor Swift, queen of the social media plug, who posted about Ryan’s single “Mine” last year. “It’s so funny because actually, literally today, when we were driving from Boston, I pulled up the picture and I was like, that’s her handwriting and that’s my name — that still happened,” Ryan says of the post, a photograph Swift posted where she hand-wrote a list of her favorite new songs by unknown artists. “I just went back and reflected on it today. Coming up on the end of the tour I was just trying to get myself energized and I was like, ‘OK my songs can affect people.’ And, I mean, Taylor Swift is a human at the end of the day. She’s so successful so it’s like I look up to her so much so if I can inspire someone who inspires me so much, eventually that will spread to other people.”

For her current tour, she headed out on the road with a familiar face, the young pop singer Charlie Puth, who coincidentally is from her same hometown in Jersey. “My piano teacher used to take me to Charlie’s performances when I was in fourth and fifth grade and would be, like, ‘See, if you practice you can play piano as good as Charlie’,” she says.

After playing Webster Hall in New York, she ended her tour with Puth on Friday at the Court Basie Theater in Red Bank, N.J., where she saw many a concert growing up. “My mom saw Ray Charles there, and so [playing there] is a big deal to me personally,” she says.

Having wrapped the tour, some rest is on the horizon. “I Airbnb’ed an RV in Venice on the beach so I’m going to be living in a camper,” she says. “Who knows why — I just needed to do something weird.”