After their final residency show at the Blue Note Jazz Club, Phony Ppl stake their claim as pioneers for a new jazz generation. 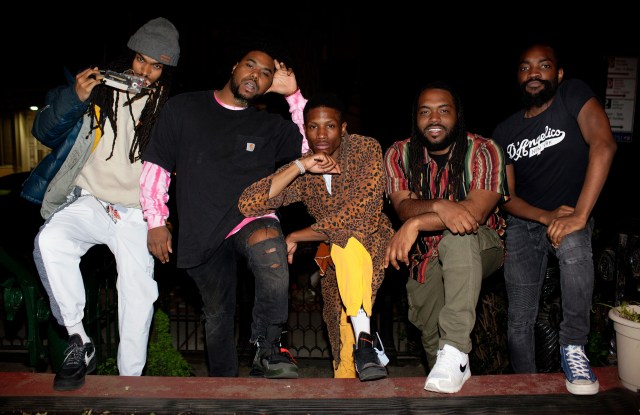 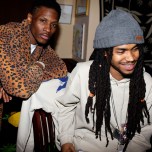 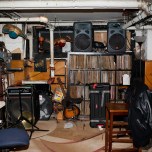 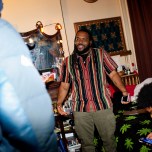 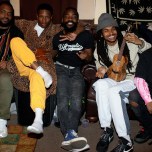 The Blue Note Jazz Club in New York’s Greenwich Village is a small venue with old, Art Deco decor and a long history. It’s played host to some legendary musical acts since opening in 1981: Dizzy Gillespie played there; Ray Charles played a full week at the Blue Note every year in the Nineties; Sarah Vaughan was a regular act. And now, the club is home to Phony Ppl — a quintet consisting of vocalist Elbee Thrie; keyboard player and pianist Aja Grant; his brother, the bassist Bari Bass; drummer Matthew Byas, and guitarist Elijah Rawk.

For the last two years, the band has played a total of three residencies at the Blue Note, taking the late-night slot at the club and getting on stage close to 1 a.m. In 2017, talent buyer and artist manager at the venue Alex Kurland wanted to change up the late-night slot and bring in a more energetic environment. Enter Phony Ppl — whose sound has been described by music publications as everything from progressive r&b to art rock, to new-age soul and hip-hop, even pop.

But the band insists its roots stand firmly in jazz. They are, as individual musicians and collectively, ushering in a new generation of jazz enthusiasts. Along with artists like Kamasi Washington, Masego and Terrace Martin, Phony Ppl has taken its own jazz foundation and tinged it with a soul, funk and rap sound that attracts listeners who are looking for something different.

It’s the evening of their final show at the Blue Note residency, and the band has gathered at Byas’ family home in Crown Heights, Brooklyn — a gentrified neighborhood on the edge of Bed-Stuy. Amid a cluster of dorm-like, boxy new buildings recently built west of Nostrand Avenue, lies Byas’ house: built in the early 1900s, it’s got a proper porch, a stained-glass front door and high ceilings. The brownstone is something of a headquarters for Phony Ppl. As visitors trickle in and out — including Byas’ father, the hip-hop pioneering DJ Jazzy Jay — the drummer talks about 2017, when this new wave of modern jazz interpretations started getting popular.

Going crazy is part of the plan for that night — although, as the band tells it, they hardly strategize before performances. They just flow with whatever feels right, allowing their limbs to speak for them, freestyling and improvising parts of their songs as they go along.

When it’s time to go, they pile into a black GMC SUV with all their gear and travel across the East River to Manhattan. There’s already a line extending down the block outside the Blue Note when they arrive. One person queuing up is Bass’ mother, who stands with his aunt on West 3rd Street. Although Bass’ father was a church drummer in Trinidad, his mom wasn’t super stoked about the idea of both her sons Bass and Grant being musicians — she wanted Bass to be an engineer. As a result, this is only the fourth or fifth Phony Ppl show she’s ever attended in their 10 years of making music.

Celebrities are known to frequent the Blue Note; Solange was seen in the crowd at a Phony Ppl late-night concert a few weeks ago. This evening, however, is for the friends and family, the wives and girlfriends, the superfans — including one woman who attended every single show of the residency. In the middle of Thrie’s performance, he shouts her out.

“She always sits in the same spot, with her same drink, a lime on the side,” he shouts gleefully. After the performance, she bestows upon each member of the band gifts inside personalized boxes with their names on them.

On stage, Phony Ppl work together as a band, though there are moments during the show when they flex their individual artistry — harkening back to the classic jazz sensibility employed by the genre’s most famous quintets, sextets and big bands. Thrie calls for solos, allowing Grant to occupy the stage by himself to play the keys, telling Rawk to riff on his guitar while the others hang back. Then, they return to one, united sound.

There’s a sad feeling alongside the triumph of closing out a residency with a show so raucous that not a single seat is occupied by the end of it — everyone is on their feet dancing to “Why I Love the Moon.” But the band is focused on its next endeavor: working on a new album. “Mo-za-ik” took three years to create, and Phony Ppl decided they will forge a different path for this upcoming project.

“‘Mo-za-ik’ was supposed to resonate with you longer and deeper. It’s to be listened to a bunch of times, over a long period of time,” Rawk says. “More than anything, we wanted to make this album fun. People don’t always want to think. Sometimes you want to dance, or even just be in an environment where there’s fun music playing.

“This is the first project where we predominantly have not been home, not even in New York, while making it,” he adds, stating they’ve traveled to Los Angeles multiple times to work on the album. “We all are from here, so when we get home, it’s easy for us to put everything to rest for a second. But when we’re out of New York, we’re together a lot more frequently so the collective flow doesn’t turn off as often.”

“All of our New York friends that we grew up with who are musicians are out in L.A.,” Grant concludes. “To be a New Yorker in New York is a rare unicorn thing.”