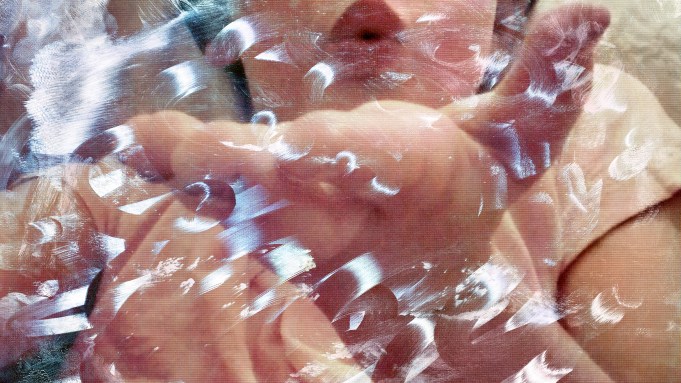 Technology’s grip on humanity will be under greater inspection with this week’s opening of Tabitha Soren’s “Surface Tension” photography show.

Culling images from social media, online searches, screen grabs from news videos and images shared by friends and family, Soren’s work certainly isn’t sanitized. With a sizable 8×10 view camera, she shoots iPad screens complete with fingerprints, smudges and other traces of the human touch. The 20 photographs — some of which are 5-feet by 8-feet — are titled as URLs as a reminder of the original source.

“We get this false sense that we are interacting with people even if they are in a small screen in our hands. Digital culture can encourage us to interact in person less and less. I think that’s a paltry substitute for the things that make people actually happy,” Soren said. “You have to be careful. These devices are shiny, oil-resistant, incredibly seductive. It’s natural as human beings to want to transcend the physical and these devices reflect all of these other images and other worlds back onto us. It’s important to take a step back and exist in reality, too. The more you are spending time in this virtual world, the less interest we have in distinguishing between fact and fiction. Virality is much more important than veracity to some people and I think it should be the opposite.”

A former assistant to the late broadcast journalist Gabe Pressman, Soren went on to be a Knight fellow and Peabody Award-winning journalist for MTV and NBC News. Diehard Beastie Boys fans recognize her from a music video cameo. More pioneering was her pitch that MTV cover the 1992 presidential campaign. The idea started with a let’s-see-how-it-goes grace period and culminated with an upswing in youth voter turnout due in part to MTV’s “Choose or Lose” initiative. But advocacy journalism was never the objective, nor was there any grand master plan, according to Soren. “At some point asking rock stars about their new record and their tour seemed like Groundhog Day, so did the campaign after a while. The reason everything worked out was because I worked really hard, prepared, and was ready for an opportunity when it became a big thing. I did lots of small things,” she explained. “I was super comfortable doing it because it was all about information. It wasn’t about being a personality or a public figure. It was about let me get the facts and try to tell stories that will make people pay attention.”

Bowing Thursday at Wellesley College’s Davis Museum, “Surface Tension” explores human engagement with digital devices. Soren will speak there April 17 and the show, which was five years in the making, will be on view through June 9. “There’s this spirit around these photographs that just reminds us of staring into these devices and what is reflected back on ourselves. There is this otherworldly aspect to it and I think we’re getting the two worlds confused — that there are two distinct things instead of one. In the Lascaux caves in France in the Stone Age, one of the earliest images by artists were just handprints on the wall. I see a direct correlation between that impulse of summoning something beyond the physical, beyond your own existence and reaching for it, and the fingerprints on these screens. That’s more of a motivating force than just being anti-technology,” she said.

While research has not yet determined how technology affects your brain, Soren cited such studies as one by “Irresistible” author Adam Alter that deduced 40 to 50 percent of young people would rather have a bone in their hand broken than have their phone broken. “There are so many studies where you are just like, ‘What?’ We’ve lost our minds’,” Soren said.

As for wading into fine art, she said, “I wanted to tell longer stories in a more subtle way. The more successful I got, the bigger the audience became and the shorter the stories became. On ‘NBC Nightly News,’ a long piece was two and a half minutes so I started working at the magazine shows there. And there I felt there was too much steering the audience and preying upon people’s fear instincts,” she said. “My work in journalism was about who, what, where, when and why. That is a very particular kind of truth. The work that I do now is connected much more directly to an emotional truth and the gray area that isn’t right or wrong — that space in between. That gives me a lot more to express and to sink my teeth into, and to insert my point of view in a way that I didn’t think was appropriate in reporting.”

Keeping her smartphone on with the ringer off while working infuriates her three children. “I’ll be upstairs and my daughter will text me from her bedroom. I will text her back, ‘I’m not answering you, until you come upstairs. I’m here — in the flesh. It’s not that hard.’ That is considered old fogey in my household,” she said. “I’m not an early adapter but I’m also not a Luddite. I work with a digital camera some of the time. I have to be on social media, because I’m a visual artist. There are all sorts of ways I’m sucked into it and it’s very useful. GPS? My God, I wouldn’t find half the locations without it.”

At home in Berkeley, Calif., Soren and her author husband, Michael Lewis, frequently talk shop. “He is good as a sounding board and as somebody who I force to look at the work. Because he really is not interested in art after about Donatello. If I get him to listen to what it’s about for any period of time, I know that more people than me would find it interesting, too. He is incredibly unpatronizing. I would love for him to patronize me more, so it’s good in that way,” she said. “And I read his drafts for sure. I am more helpful when he is writing about politics than business. The rule that I have when he is writing about incredibly complicated dark money or a new stock exchange would be, ‘Are you writing it so most of the population can understand it or is it only people who work in finance?’ So I’m sort of what we call in television ‘any ole a–hole person’,” she said with a laugh.

The conflict that gallerygoers will find on her images is meant to visualize the attention of being on computers, screens and phones all day, Soren said. Inclined to toss any work that looks too decorative, Soren said her art requires “something that is kind of intense and unfortunately slightly dark to keep my interest for years. I might be a happier person if my work was a little less heavy. My husband is an incredible optimist and he does nothing but run victory laps, so I keep thinking I’ve gotta try that. But my chemistry just doesn’t seem to put me in that state of mind,” she said.

Her projects “always are about trying to visualize some psychological state and yes sometimes they are about panic attacks or the flight-or-fight response. This one is about technological domination and the fear that that puts in your head,” Soren said, adding “building community with the people who come to see this work and realize I relate to this because I feel that way, too. I have had to really rely on resilience to get myself out of this situation or anxiety has overtaken me like that wave crashing down on people. And here’s this person making something compelling out of it.”

Reached last week in Boston, Soren was skeptical about how many would show up on a frigid night for her Photographic Research Center with “Broad Strokes” author Bridget Quinn. “I suspect that turnout is going to be low — easy come-easy go. I didn’t appreciate 80 million viewers, when I had them.”