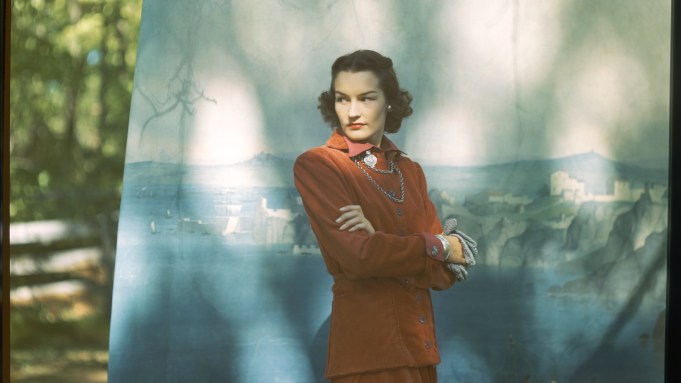 Not exactly your stereotypical postwar stay-at-home couple, photographers Leslie Gill and Frances McLaughlin-Gill used their work to bridge fashion, design and fine art in the Forties and Fifties.

A new exhibition of their work, “Lives & Still Lives: Leslie Gill, Frances McLaughlin Gill and Their Circle” at the Howard Greenberg Gallery, presents their work together for the first time in the U.S. Considered the father of modern still-life photography, Leslie Gill, an alumnus Rhode Island School of Design, studied with the artist Charles Hawthorne.

Their daughter said of her mother, “I think she felt her lifelong continuity was showing women as having many facets of their life and having a depth of personality and a strength that allowed them to engage in the world in multiple ways. I think that is a very modern idea of what women can be and is extremely relevant right now at a moment when culturally, at least in America, if not globally, we’re reevaluating what women are, and what their roles are.”

Six years before they married in 1948, McLaughlin worked for a time as Gill’s assistant before Vogue’s art director Alexander Liberman offered her a job at Condé Nast’s Vogue Studios. The pair reconnected after WWII once Gill had finished a five-year run in the Office of Strategic Services, a precursor to the Central Intelligence Agency, and in the Psychological Warfare Division. He helped set up underground presses, working with the Resistance in various countries such as Egypt and Italy. It is believed that Irving Penn’s wife Lisa Fonssagrives may have introduced the couple.

The Brooklyn native attended Pratt Institute, as did her twin sister Kathryn Abbe and both women were finalists in the Vogue-sponsored Prix de Paris contest in 1941. After graduation and through the photographer Toni Frissell, Frances McLaughlin met Liberman and started shooting women in impromptu environments as active participants.

McLaughlin was the first female employee in the Vogue Studios, which at that time employed 10 staff photographers including Arthur Todd. Clifford Coffin, Horst P. Horst, Herbert Matter, Richard Rutledge, Norman Parkinson and Roger Kahan among them. McLaughlin-Gill told her daughter they shot daily and the editorial photographers, of which she was one, would have major sections in at least two issues a year.

The show’s curator Elisabeth Biondi weeded through 6,000 images before deciding on the final 50 or so. There are also works from Erwin Blumenfeld, Louise Dahl-Wolfe, Paul Outerbridge, Gordon Parks, Norman Parkinson, Irving Penn and Man Ray. Leslie Gill said, “It was this moment in time where a great group of artists quickly absorbed a new generation and had these quick creative conversations that allowed them to move forward. Whether it was the influx of refugees, new technology, just social change that it became a very productive time for both magazine photography and art photography.”

She said her father, who died in 1958, was very comfortable with technology, embracing the introduction of color film and new lighting. Gill worked with Harold Edgerton, who created strobe lights, and he was one of the few photographers who tested film for Kodak, shooting daily and providing the company with meticulous notes. His daughter said, “He was someone who was an artist in a broad range of mediums. When he was thinking about photography, it was just one layer of what he saw the artwork to be. If he was doing something for a publication, in his mind’s eye it was completed with the typography. He already knew what the typography was going to look like. He was thinking about drawing and there was fluid-ness among mediums. That’s extremely applicable today.”

Gill and her photographer twin sister, Kathryn Abbe, as well as Penn’s wife, taught their children at a young age to sew, cook, repair plumbing, handle electrical problems, to change a car’s tire. Gill’s daughter, a New York architect, said, “They just believed to have the tools at hand, one could be empowered simply by knowledge. My mother was an extraordinary teacher and she was the kind of person who by her generosity allowed you to understand that the creative act required experiment to fail — to not to see failure as a negative, but part of an overall process. She made you believe that you had the conviction to succeed and you could explore the limits of your known horizons. Her years as a naturalist gave her an uncanny ability to look at other humans an understand what support they needed and what made them work. She was a humanist at a deep level.”