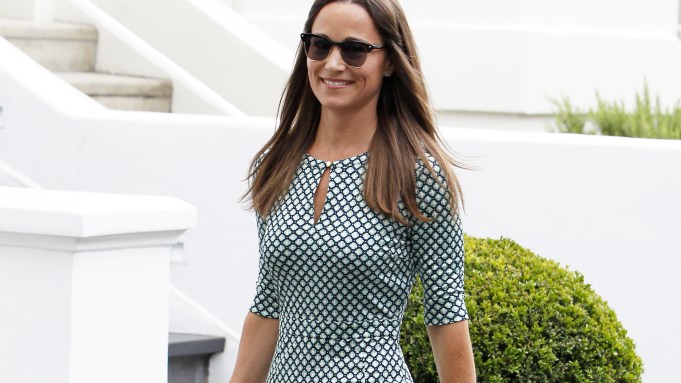 Prying eyes got a good look at Pippa Middleton’s engagement ring on Thursday as the Duchess of Cambridge’s little sister stepped out, giant sparkler in tow. While details of the ring have yet to be confirmed, it appears to be an Asscher-cut 4-carat center stone, surrounded by a 1.5-carat halo of white diamonds set in platinum bezel. Forty-year-old hedge funder James Matthews proposed to Middleton over the weekend with an Art Deco-inspired dazzler while the pair was on a trip to England’s Lake District. The couple first were an item in 2012, though briefly. She then dated longtime boyfriend Alex Loudon until recently when she reunited with Matthews. Of the upcoming nuptials, a Kensington Palace spokesperson stated “The Duke and Duchess of Cambridge are absolutely delighted with the news.”