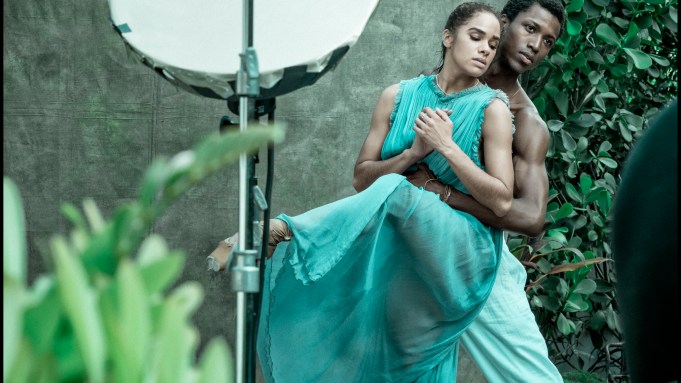 But don’t expect sultry soft-porn images in Pirelli’s 2019 edition. Photographed by Albert Watson, the upcoming version reflects a move away from sexiness to a story line with strong characters.

“The women are different from the topless babes on the beach,” Watson said during the final days of the shoot. “I’m trying do something that has layers to it.

“It’s an interpretation, a visual exploration of the changing nature of ambition and success as told through four female protagonists who are playing roles and three supporting male protagonists,” Watson said.

Gigi Hadid is a damaged heiress holed up in her apartment at the Carlyle Hotel with her bestie, Alexander Wang.

Hadid, who appears to have everything, carries around sadness. She only feels safe in the Manhattan apartment where Wang consoles her.

“Gigi’s character just thinks about tomorrow and what club she’ll go to and how many followers she has on social media,” Watson said.

Misty Copeland plays a dancer who’s not as accomplished as the ballerina who retired in June from the American Ballet Theater. “She dances at a local strip club in Miami and lives with her boyfriend, who’s also a dancer,” Watson said. “They dream about being [legit] dancers.

“Laetitia [Casta] plays an artist working on a sculpture of her boyfriend. She longs to be a painter.

“Julia [Garner] is a photographer who works in a botanical garden capturing rare plants,” Watson said. “She dreams about becoming a well-established portrait photographer.”

All four women are on the road to achieving their life goals when Watson, as lensman, narrates their journeys and lays bare their victories and defeats.

”I wanted to make sure I attempted something different,” Watson said, referring to the expository nature of the images. “I decided to shoot the women making almost no eye contact [with the camera.] If you’re looking at me, you’re not dreaming.”

“I thought the theme was very timely,” Hadid said following the shoot, wearing a robe, her feet bare. “Pirelli is known for very provocative images. I think this is provocative in a different sense.”

Curling up on a chair with her legs tucked underneath her, Hadid said she can relate to her character “because I’m always traveling alone and I find myself, like the character, a little lonely and sad. But there’s a beauty in being alone and finding out what it is that you need.”

Hadid said that for her, going to the family farm “and not putting on makeup…lets me come back and be really present for the next job.

“I didn’t realize this, that I always had the guilt of privilege,” Hadid said. “I started modeling and worked so hard — also, I didn’t want to be defined by being pretty. I went to college for something really interesting.”

Hadid, who was part of last year’s Pirelli calendar, photographed by Steven Meisel, said of the 2018 issue, “The concepts are very different. It was a great experience and it led to great things for me. I’m a different kind of model. I learned how to be more confident about my idea of what a creative image is for myself.

“It’s crazy because so many of the things I’ve accomplished I didn’t think I’d do ever,” Hadid added. “Now, I define success as doing something I’m inspired by. I feel successful when I’m part of the team. That takes learning the balance of when I’m away and being able to come back stronger. Success is keeping a kind of normality. I learned to be assertive and not to be scared that it will make me seem ungrateful.”

Hadid mused about working with Wang and the Pirelli story line. “He plays the friend that’s there in the dark times,” she said. “My friends consist of my lifelong friends. They remind me of who I am. It’s tough to hear, ‘She doesn’t deserve it’ about my success. My friends remind me that I’m good enough.

“I have my industry friends like Blake Lively, who understands what I’m going through,” Hadid continued. “She’s kind and real and has figured out how to have a normal life.”

“Gigi made it a lot easier,” Wang said of the shoot. “This is the first time I’ve worked with Gigi. I’ve worked with [Gigi’s sister] Bella. Gigi is a little more quiet. They both talk about how they sleep in between shots.

“In one scene we’re watching a prop TV. There’s a certain melancholy,” Wang said. “Albert’s taken the narrative to another level. It was beyond just a fashion picture.”

Wang worked with Watson a few months before the Pirelli shoot when he photographed an ad campaign for the designer’s brand. “He’s the O.G.”

Wang attributed the development to “the #MeToo movement. You now have possibilities to assert yourself. That doesn’t mean you have to be a bitch.”

However, the experience of working on the Pirelli calendar didn’t leave Wang pining for other acting jobs. “It’s always a little surreal. I’m definitely not acting. I’ve had a few opportunities on the other side of the camera. Acting is not what I was born to do.”

Hadid has been bitten by a bit of an acting bug, however. “I would love to act,” she said. “I get the roles that would seem kind of obvious — the model, the girlfriend. When I get the opportunity to audition for roles I’m really interested in, I’ll audition. I’d rather do a couple of great films than a lot of [mediocre] ones.”

Fashion is high on her list. “I’m  definitely interested in designing, even more than doing ad campaigns. I enjoy the days when I spend all day cutting and drawing,” she said, referring to her wildly successful Gigi x Tommy Hilfiger capsule collection that launched in 2016.