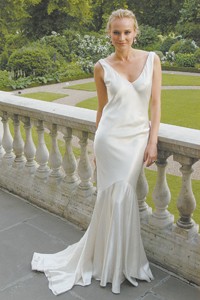 LONDON — “My tennis knowledge isn’t great — I sort of stopped with Steffi Graf and Boris Becker,” whispered Diane Kruger, who had a handful of fabric from the train of her gown in one hand and a flute of vintage rosé Veuve Clicquot in the other as she stood on the terrace of the palatial Spencer House overlooking Green Park here.

Tennis, not surprisingly, was on almost everyone’s mind Wednesday night at the manse, where there was a dinner cohosted by David Lauren and British Vogue to fete the debut of the Polo Ralph Lauren uniforms for umpires and ball persons at Wimbledon. Venus Williams was amazed to hear where the Polo photo shoot had taken place earlier that day for the new uniforms.

“You guys were actually on Centre Court?” the reigning Wimbledon women’s champ asked. “Believe me, it’s not easy to get there.”

David Lauren, meanwhile, was both sporting a newly shorn pate and dreaming of a new career. “My plan is to defeat [Roger] Federer in the finals, and make sure the sun shines for two weeks in London,” he quipped.

“And if the sun doesn’t shine, we’re suing. It was part of the deal with Polo, and I’m litigious,” joked Ian Ritchie, chief of the All England Lawn Tennis and Croquet Club, which stages the championships.

The intimate dinner for 90 drew the likes of Anthony and Alina Kennedy Shriver, U.S. ambassador Robert and Maria Tuttle, Sophie Dahl, Jade Jagger, Erin O’Connor, Clemmie Hambro, Flora Fraser, Peter Soros, Emily Compton, Santa and Simon Sebag Montefiore and Lauren Bush, as well as a bevy of former and current New York socials — Rena Sindi, Lillian von Stauffenberg and Renée Rockefeller (who was in town for Sindi’s birthday). Guests mingled happily on the terrace despite the chilly temperatures (of course: England in June) before going up the grand sweeping staircase to the second floor for dinner in the Great Room, complete with huge crystal chandeliers and epic oil paintings on the walls.

Jemma Kidd, one of the smattering of ladies who donned a Ralph Lauren frock for the evening, was pleased with her purple silk print dress — but not for the obvious reasons. “It’s comfortable. And look, it’s not tight. I have enough room to eat whatever I want,” she said.

And while the house may have been packed with Polo fans, there was one guest in particular who showed true die-hard loyalty. Claire Danes swept into the party just before midnight — after most others had departed — after a long day shooting “Stardust” with Matthew Vaughn at Pinewood Studios, on the outer edges of London.

“The driver took a very ‘creative’ route back to town,” said Danes, who was dressed in a black, floor-length, backless gown. “It’s just been an insane day.”