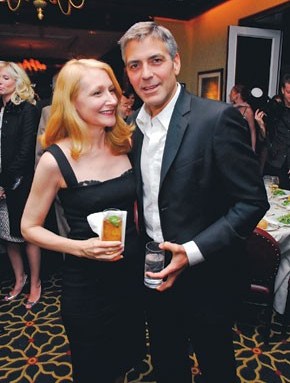 Bruce Willis, Katie Couric, Patricia Clarkson, Clive Owen, Julianna Margulies, Harvey Weinstein and Georgina Chapman and socialites galore showed up at MoMA Thursday night for a screening of George Clooney’s latest film, “Leatherheads.” Like the last film he directed, “Good Night & Good Luck,” the movie is a period piece and the actor costars in it as well.

But the similarities pretty much end there. While the former is a serious biopic about Edward R. Murrow and Sen. Joseph McCarthy, “Leatherheads” is a slapstick caper about a football team in the Twenties. “I wanted to make a movie that wasn’t issue-driven,” said Clooney. “Plus, I’m 46. Pretty soon, the only role I’ll be able to get in a sports movie is as the bowling coach.”

At the dinner afterward at the 21 Club, Willis chatted with Ellen Barkin, while Clooney caught up with old friend Heather Mnuchin.

Meanwhile, across the country in Clooney’s home base of Los Angeles, Brooke Davenport opened her brand new Hollywood Hills home for a showing of Kaufman Franco’s fall collection. Though the setting was idyllic — “This feels like a vacation,” sighed Ken Kaufman (one-half of the design team with partner Isaac Franco) — the cobblestone patio proved to be hard work for their Louboutin-clad models.

Among the guests seated at the orchid-laden long table were Rebecca Gayheart, Alexandra von Furstenberg and Nicky Hilton. Though most of the guests opted for sleek black ensembles, the hostess tried to coordinate with her decor: “Everything is white, so this was the only choice I had,” she said of her white jersey dress.