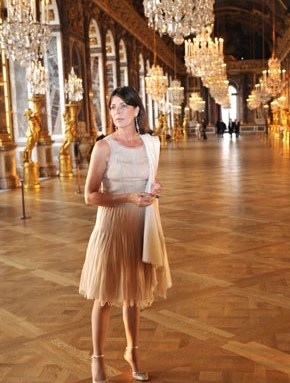 Chanel and a princely Karl Lagerfeld held court at the Chateau de Versailles Monday night, the designer’s Hummer parked in the forecourt in lieu of a carriage.

Lagerfeld led Princess Caroline of Monaco and her husband Prince Ernst August of Hanover and Valentino and Giancarlo Giammetti through his exhibition of silvery screen prints of the palace grounds. “Oh, that’s nothing, it could even be mistaken for a statue,” remarked Lagerfeld of one pesky human who had wandered into the background of a fountain shot.

Taking a short cut through the palace’s labyrinthine corridors, the pack arrived at the royal bedrooms. “It’s too raspberry,” muttered Lagerfeld of one of the chamber’s crimson walls, before bursting into a room full of guests sipping cocktails in the pink light of the setting sun.

“Oh, there are so many people,” exclaimed the designer, adding he could imagine staging a Chanel show at the palace in the near future, given that the Grand Palais will likely be booked for exhibitions. “That’s if they’ll have me,” he said, striking a pose with actress Marie-Josée Croze.

Taking a stroll through the Hall of Mirrors, meanwhile, Audrey Marnay talked of summer plans. “I’m going surfing in California,” said the model, who’ll start filming a road movie in Japan next spring in which she’ll play the lead.

“Wouldn’t it be wonderful to throw a ball in here?” exclaimed Valentino, adding he’s split between spending his vacation in Greece or Turkey. “Forget all of those clichés of excess. If I could spend one night here I would privilege solitude, wandering alone through all of the rooms,” mused Joanna Preiss.

A phantom-like Owen Wilson, dressed in a white jacket, scuttled through the event and out, dodging photographers.

Turning to other artistic subjects, Lagerfeld revealed he’s mulling dedicating the Mobile Art pavilion’s stop in New York this fall to one artist. “Nothing’s been decided yet, but my favorite [artist would be James] Turrell,” he said.