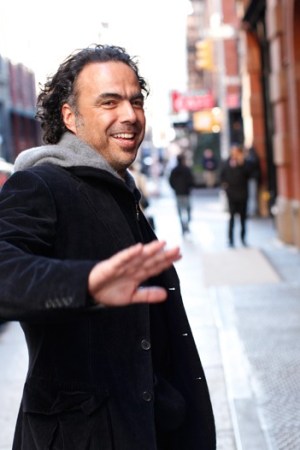 The lobby of the Mercer Hotel is a hub of schmoozing activity just after 2 p.m. on an early fall afternoon. In one corner, a group of Europeans are having a heated debate over drinks. Guys in slim-fitting suits are draped over every possible inch of space. Chris Rock is holed up at a corner table chowing down with a group of friends. Director Alejandro González Iñárritu cuts an anonymous swath through the scene as he crosses the room and settles down to discuss his latest film, “Biutiful,” over a pot of mint tea.

Dressed in a dark sweater and speaking in soft, but adamant tones, González Iñárritu seems accustomed to functioning in such a frenzied environment. No surprise there, judging by the famously high energy, fast-paced cinematic style he has showcased in works such as “Babel” and “21 Grams.” But with “Biutiful,” his first Spanish-speaking movie since 2000’s, “Amores Perros,” and already the Mexican entry for the upcoming Academy Awards, González Iñárritu made a conscientious effort to move away from the very hallmarks that have earned him his reputation.

This story first appeared in the December 27, 2010 issue of WWD. Subscribe Today.

“I want to get out and get rid of the dangerous zone that I was thinking I was getting trapped in: this branding kind of thing of the multilinear structure guy,” says the 42-year-old. “Suddenly, that became a gimmick or predictable kind of thing. It seems that now, the most experimental or radical way to tell a story is in a traditional way.”

Certainly “Biutiful,” which opens Wednesday in limited release, with its more straight-forward narrative and intense character focus, will surprise González Iñárritu fans accustomed to juggling five plotlines at once. Set in the multiethnic Santa Coloma and Badalona neighborhoods near Barcelona, the film follows Uxbal (Javier Bardem) — according to the director, “a very street guy, primitive, but at the same time very sensitive spiritually,” — trying to make a living and support his two young children, often through legally questionable means involving the African and Chinese immigrants that populate his area. He is also a man stricken with both metaphysical powers — he can communicate with the dead — and a terminal illness that casts a gray cloud of melancholy over his daily travails.

“It was this kind of timeless question [of] where we go when we die that [drew] me in,” González Iñárritu explains of the narrative. “But this film has this timeless question in a very specific time and a very specific, social, urgent problem that we are facing. The rules and the cruel and incredibly unfair circumstances that millions of immigrants are suffering around the world, and we are all living under the dictatorship of capitalism, and it’s just the dehumanization of the territories that is striking me.…It’s an expression of a simple man’s life in a complicated world.”

A simple man and a very tragic one at that. The movie’s saturated color palette only serves to heighten the sense of inevitable loss that Uxbal and his family face. To watch a man dying slowly, however poignantly and beautifully, is not an easy sell to mass audiences.

“This is a film about life, it’s not about death,” González Iñárritu argues. “It’s not bleak. I think it’s a story about life being told from the ending point. The films that I think are about death are the ones [where they] kill 20 people and you don’t care about any of them and you say, ‘What the f–k?’ and you don’t give a damn about any of them. Those films I find bleak and very dark because I cannot laugh because in my country, the bullets really cross the human flesh and kill people. So I don’t find any entertainment in that.”

That said, González Iñárritu recalls his childhood as a happy one, despite its challenges. He was born in Mexico City. His father was a banker, who lost his job when González Iñárritu was young and struggled to support his family. “I learned from him to be stubborn, and at the same time, in a way, I’m born with a certain fear of failure,” he says.

González Iñárritu grew up in a neighborhood not unlike the one documented in “Amores Perros,” playing with his friends in the streets every day until late into the evening. As a teenager, he spent two stints cleaning the floors of a cargo boat crossing the Atlantic. After the second trip, he stayed in Europe with $1,000 in his pocket and no planned destination.

“I read a lot of existentialism, all the Latin American material, smoked a lot of pot,” he recalls. “I think those three years were for me definitive for my understanding of the concept of the world.”

He knew at age 20 that he wanted to be a director, but spent years doing everything from hosting a radio program to creating commercials and even studying theater before arriving at his current, autodidactic profession. And if his work since then has tended to land on the darker side of the emotional spectrum, González Iñárritu is quick to credit his adolescence and upbringing for continuing to shape his vision.

“I come from a tragic and visceral culture and I’m a visceral, passionate person,” he explains. “I find myself fascinated by the incredible possibilities that we as human beings are capable to do under the worst and toughest circumstances. I’m not interested to make people depressed or lock them in a black room at all. I think it’s just right and valuable to go to the very extreme, as if you are at the fair and you go on the toughest ride. But at the end, the catharsis, I think, will be much more durable and profound.”