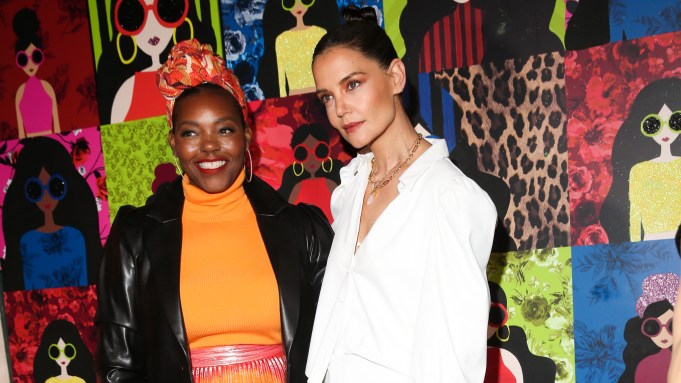 Instead of hosting a massive fashion week presentation, Stacey Bendet decided to mark Alice + Olivia’s 20th anniversary with a party at members club Zero Bond. While her new collection was displayed on models throughout the room, the clothing wasn’t the entire story this season. On Saturday evening, the designer premiered a short video that featured her fall collection, in the context of a dance routine choreographed by Ebony Williams and original poem written and performed by Mahogany L. Browne.

“They reached out and said, you do a lot of poems thinking about women first, and we’d love to talk,” said Browne of connecting with the brand, shortly before reciting her poem for the room. (The video was later released on the brand’s social media channels.) Browne, who was named Lincoln Center’s first poet-in-residence last summer and was selected as one of Kennedy Center’s Next 50 last fall, was drawn to the project — her first collaboration with a fashion brand — because of Bendet’s shared brand mission of female empowerment.

“My approach was focusing on their mission, which really aligned with my mission, which is women uplifting women, and women empowerment. All of those notes and verbiage come into the poem,” said Browne, who had the room’s full attention during her recitation.

“I feel like it was kismet. My entire work as an artist, as a performer, as a mentor, focuses on youth empowerment, sistership and kinship,” added Browne. “So much of our ways were mirroring each other.”

Guests included Lea Michele and Katie Holmes, both dressed in all-white, and Nicky Hilton, who posed by the giant Alice + Olivia-branded soup can decor.  Former “Bachelorette” star Tayshia Adams — on reporter duty — reviewed questions on her cue card in between interviewing her fellow VIPs.

“What I hope to teach and instill is that we want women to truly empower versus compete. We gave [Browne] these notes and she wrote the ‘Song of She,’ and we created this video,” said Bendet, who was blown away by the results. “I got the chills; I thought I was going to cry. Just her voice, the idea of what we were creating together…it just feels so powerful.”