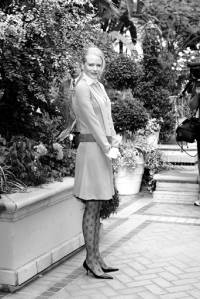 “Does this mean I’m actually becoming a power woman?” asked Selma Blair at Premiere’s annual Women in Hollywood luncheon yesterday at the Four Seasons in Los Angeles. “How scary is that!”

Among the actresses honored at this year’s event were Nicole Kidman, Meryl Streep and Jennifer Garner, who could only slip away from the “Alias” set for an hour.

Although the event is a ladies-only affair, a few select males are invited each year. Arie Kopelman, president and chief operating officer of Chanel Inc. (which sponsored the event), was among the lucky ones, as was David Duchovny.

But when Chloë Sevigny caught sight of the actor, she arched an eyebrow.

“What is he doing here?” she complained.

Kopelman had his own bone to pick with Duchovny.