Miuccia Prada and Rem Koolhaas to kick off the Seoul arts project next month. 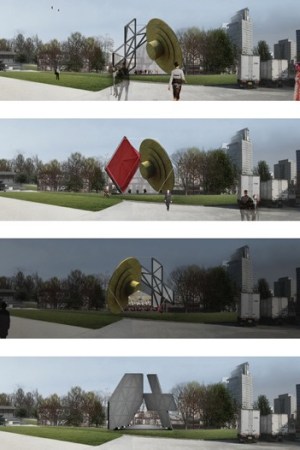 SEOUL — Prada and OMA-Rem Koolhaas are preparing to unveil their much-anticipated Transformer project next month on the grounds of an imperial palace, where rulers during Korea’s Joseon Dynasty used to meet foreign diplomats.

Tomaso Galli, Prada’s head of communications, outlined details of the collaboration at a press briefing here Tuesday. Miuccia Prada and Koolhaas are planning to attend the April inauguration of the steel tetrahedron-shaped structure, which, true to its name, can morph its shape.

The Transformer’s five-month life cycle will kick off on April 25 with a reprise of Prada’s “Waist Down — Skirts by Miuccia Prada” exhibition, including some added looks from emerging South Korean fashion students. In June, the structure will screen a series of films selected by Oscar-nominated director Alejandro González Iñárritu of “Babel” fame. The program, titled “Flesh, Mind and Soul,” will be cocurated by film critic Elvis Mitchell and will span “multiple genres, countries and decades of filmmaking,” the company said.

The Transformer will also host an exhibition of the Prada Foundation’s artworks titled “Beyond Control,” but dates have not been established. Additional events for the space are under consideration, Galli said.

All of the events are free to the public.

The building’s structure is composed of hexagon-, cross-, rectangle- and circle-shaped components made of an elastic-coated steel, allowing them to be moved to accommodate the different events. The structure is under construction on the grounds of the 16th-century Gyeonghui Palace here.

Prada is not disclosing the cost of the project, 18 months in the making, except to say that it is providing up to 80 percent of the financing, with partners LG Electronics, Hyundai Motor Co. and Red Resources Inc. funding the remainder.

Unlike Chanel’s traveling “Mobile Art” exhibition, which the French house canceled last year mid-itinerary, the Transformer will stay in Seoul for the duration of its run — although Galli added that Prada has already received one offer from a party interested in buying the structure and the fashion house may eventually bring the Transformer back to Milan to round out its arts collection.

Seoul was chosen as home of the project because of the “passion and enthusiasm” Prada’s local staff and the metropolitan government had for the concept, Galli said. The city has an understanding of contemporary art, boasts an influential entertainment industry and has an abiding interest in architecture and fashion, he added.

The project has nonetheless raised eyebrows in Seoul. The Korean peninsula has suffered numerous invasions throughout the centuries, and half-a-century ago almost all of Seoul was destroyed as Communist and United Nations’ armies fought to capture the city. As a result, its few ancient buildings have been restored and Seoul wants to preserve its architectural relics. But at the conference, Galli stressed Prada will foot the bill for the palace grounds to be completely restored to their original state.