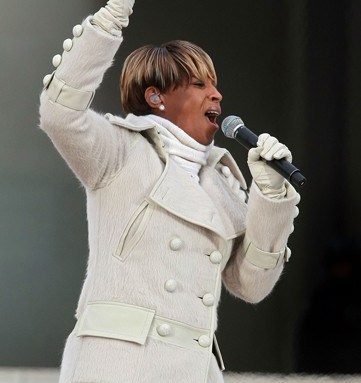 Washington this week is a little bit like the Oscars, Black History month and the Presidential inauguration all rolled into one. Virtually every hotel inside the Beltway is being used for a party (or two or three or four) and celebrities — from the smartest of the bunch to the ones who assuredly don’t even know where their polling place is — are everywhere.

The “We Are One” concert at the Lincoln Memorial on Sunday was a true test of egos. The high-octane event, a tribute to President-elect Barack Obama, brought together some of the world’s biggest musical performers and celebrities, including Bono, Jon Bon Jovi, John Legend, Sheryl Crow, opera star Renee Fleming and James Taylor, who set aside their stardom to share the stage under the marbled gaze of Abraham Lincoln, before a crowd of more than 400,000.

Obama, whose star wattage outshone all of the other boldfaced names, descended the steps of the memorial with his wife Michelle, before taking his place inside a bullet-proof enclosure on the side of the stage with daughters Malia and Sasha and incoming Vice President Joe Biden and his wife, Jill and their family members. The President-elect sang along with Garth Brooks performing “American Pie,” and mouthed the words of “This Land is Your Land,” played by Bruce Springsteen and Pete Seeger. The whole family danced to Stevie Wonder, Usher and Shakira’s rendition of “Higher Ground.”

At one point, the concert seemed to be a blend of a Hollywood awards show and history class on civil rights. Tom Hanks, Denzel Washington, Ashley Judd, Queen Latifah and Laura Linney all read from speeches or cited the achievements of past presidents Abraham Lincoln, John F. Kennedy, Thomas Jefferson, Franklin Delano Roosevelt and, in a bipartisan nod, even Ronald Reagan, as well as Martin Luther King, Jr. There were a few lighter moments, such as when Jamie Foxx did a dead-on impersonation of Obama delivering his speech on Election Night and an over-the-top grab at patriotism with the display of two live bald eagles named Challenger and Mr. Lincoln.

But Obama lent a sobering touch to the festivities. “Our nation is at war. Our economy is in crisis. Millions of Americans are losing their jobs and their homes; they’re worried about how they’ll afford college for their kids or pay the stack of bills on their kitchen table. And most of all, they are anxious and uncertain about the future—about whether this generation of Americans will be able to pass on what’s best about this country to our children and their children,” he said. “You proved once more that people who love this country can change it. And as I prepare to assume the presidency, yours are the voices I will take with me every day I walk into that Oval Office—the voices of men and women who have different stories but hold common hopes; who ask only for what was promised us as Americans—that we might make our lives what we will and see our children climb higher than we did.”

The hottest party so far was held by Maureen Dowd, whose Georgetown house was like one big Washington keg party Sunday night as guests packed in like sardines to fete David Geffen. By the time Tom Hanks, Rita Wilson, Bruce Springsteen and Patti Scialfa showed up around 8, the place was so crowded none of them could even get through the front door. “My party’s a total failure,” bemoaned the hostess. Actually, it wasn’t. Those who did make it inside included Larry David, George Lucas, Anderson Cooper, Rahm Emanuel, and Diane von Furstenberg. Also present was Alan Greenspan, who’s apparently just as ubiquitous on the party circuit as he was before his role in creating the subprime mortgage crisis was revealed. “Why shouldn’t he show up at parties?” said one partygoer. “This is Washington. There’s no shame in Washington.”

The first Green Ball of inauguration weekend took place Saturday at the Andrew Mellon Auditorium (Al Gore will host a different Green Ball on Monday). The mood quickly elevated once Wyclef Jean, the night’s headliner, bounded on stage. The performer doffed his formal coat and shirt, performing most of the concert in a white tee with a yellow “Barack My World” bumper sticker stuck to his forehead. Terrence Howard, D.C. Mayor Adrian Fenty, Jackson Brown, comedian Tommy Davidson and model/activist Summer Rayne Oakes all mingled in the VIP room backstage.

The inaugural festivities weren’t Hayden Panettiere’s first foray into the political sphere; the young actress is involved with the youth-voter organization Declare Yourself and attended the Denver convention in August. But being in D.C. for the inauguration, “is incredible,” Panettiere said. “I don’t know if you can top this.”

“I’m very excited, and very enthused,’ said Fenty about the pending inauguration. “I’m almost getting anxious.” Meanwhile, his wife Michelle was steeling herself for the marathon of parties. “I’ve been very careful about my shoes for these four days,” she said.

NEXT: Hitchens’ Shindig, Time with Tina, and Lindsay Lohan…>>

A separate group of revelers, from Salman Rushdie and Michael Stipe to economist Larry Summers, gathered at the home of Christopher Hitchens and his wife, Carol Blue, for a party cohosted by Slate Group editor in chief Jacob Weisberg and Washington Post chief executive officer Don Graham.

“There is a great sense of excitement of new people coming into town. And it’s an exciting new social scene,” Brown said. The hostess corraled Obama senior adviser David Axelrod and John Cusack (making the rounds with Arianna Huffington) as well as a few Washington regulars including Madeleine Albright, Richard Holbrooke, and Ben Bradlee and Sally Quinn.

Meanwhile, Lindsay Lohan and Ben Affleck were on hand when Jessica Alba and Maroon 5 co-hosted a lavish affair for “Declare Yourself,” a voter registration drive run by Hollywood producer Norman Lear.

Carrie Fisher roped in Marisa Tomei and comedian Mo Rocca for a pajama party that benefits an organization that provides blankets and sleeping gear for underprivileged children.

NEXT: The Kuwaiti Embassy Bash>>

Over at the Kuwaiti Embassy, power was the ultimate aphrodisiac. Rima Al-Sabah hosted a cocktail party for Washington power players on Sunday. Outgoing Treasury Secretary Hank Paulson, the man who first suggested giving away trillions to bail out the banks, huddled with Obama’s incoming Budget Chief Peter Orszag. In true tight-lipped Obama style, Orszag declined to divulge exactly what they were cooking up. “We’ve been working hard,” he offered. “You’ll have to go with that.”

Nearby, Tina Brown gushed with Colin Powell, taking time to rave about the new First Lady. Brown dubbed Michelle Obama “a post feminist woman, so comfortable with her choices.” Comfortable enough, it seems, to turn down an invitation from journalist George Will, who has hosted private parties for previous Presidents and last week hosted a dinner for the incoming one—sans Michelle. “She has young children,” said Will’s wife Mari. D.C. mayor Adrian Fenty’s wife Michelle, who recently had a baby, understood the new First Lady’s reasoning. “The children are my first priority,” Fenty said.

Another party contributor, lawyer Tom Reed who pulled in over $250,000 for the Obama campaign, arrived a little late after stopping by Inaugural co-chairman Penny Pritzker’s party honoring top donors at the Park Hyatt Hotel, the Washington flagship of the hotel chain founded by her family. But for some, this bash marked the end of their inaugural social obligations. Leonard Lauder zipped out of town early via NetJet. And opera singer Denyse Graves, who sang at both the Bush Sr. and Jr. inaugurations, was heading home to watch Tuesday’s spectacle on TV with her husband and kids in their new Bethesda, Md. digs. She wondered if perhaps she was being left out because of her connections to the previous administration. With a mischievous laugh, she said, “Who knew?”

Next: Oprah Winfrey at the Root Party>>>

OPRAH WINFREY AT THE ROOT PARTY

The Washington Post Co. hosted a party for The Root, a new African-American themed Web site the company is doing with Slate and Henry Louis Gates Jr. Gates was measured about what the future holds. “There is so much goodwill towards Obama, but now the rubber hits the road. On Wednesday he wakes up and he’s the President of this mess that was left to him by the Bush administration.”

“People need to remember, the guy’s not Moses. He’s not Jesus,” said Spike Lee, who was text messaging nearby as guests dined on sushi and dumplings.

But Oprah Winfrey at least remained optimistic. Asked if all the partying this week was the beginning of the end, she said, “Oh, no. We’re just getting started. I’ve never felt we were in better, calmer, steadier hands. We’ve never had anyone this good.”