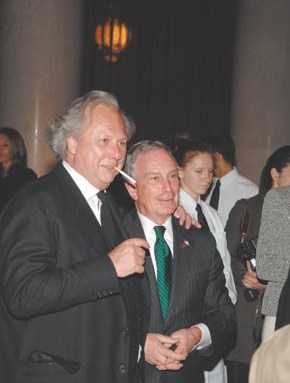 At Vanity Fair’s kickoff party for the Tribeca Film Festival Tuesday night, there were movie stars galore, socialites by the truckload and at least a hundred BlackBerrys and other handheld devices that were constantly being pulled out to check the results of the Democratic Primary in Pennsylvania. “We’ve got a TV that’ll be showing the results during dinner,” offered Graydon Carter, as guests such as Robert De Niro, Anjelica Huston, Larry David, David Bowie, Sigourney Weaver, James Gandolfini and Zoe Kravitz ascended the stairs of the State Supreme Courthouse for cocktails.

Jerry Seinfeld was relying on an Internet connection from his wife Jessica’s Smartphone. Vh1’s John Sykes did him one better by placing calls directly to the Clinton campaign to find out how the candidate was doing. Even Muffie Potter Aston seemed engaged, if perhaps a little less passionate about the merits of Hillary or Barack. “I’m a Demapublican,” she quipped. “I started out life as a Republican, then became a Republicrat, now I’m a Demapublican. I guess you could say I’m evolving.”

There was also talk on the steps of another political race. “Third term, third term!” boomed Deborah Grubman, upon Mayor Michael Bloomberg’s arrival with Diana Taylor. “No, no,” he laughed. “And I’m not buying The New York Times, either.”

“Forget that,” said Grubman’s husband, Allen, the entertainment lawyer. “How about the Star and the National Enquirer?”

“Are they for sale?” Bloomberg asked.

For his part, the mayor didn’t think the never-ending primary was nearly as big of a deal as the pundits and journalists do. “I think there are three great candidates and all of them have a chance. The more candidates we have to choose from, the better,” he said.