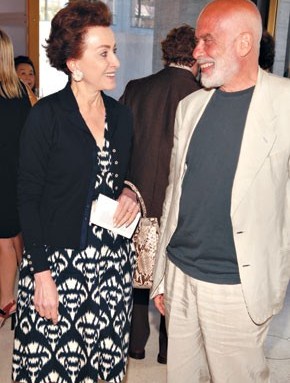 “It looks fantastic,” gushed Jeanne Marine Geldof as she wandered through Richard Prince’s solo show, “Continuation,” which opened at London’s Serpentine Gallery on Tuesday with a party hosted by Louis Vuitton.

The exhibition includes an Eighties car printed with a model’s image, work from the artist’s cowboy series and his “Runaway Nurse” painting. As an added bonus, Prince deconstructed his oeuvre during a slightly off-beat Q&A for guests including Lily Cole, Charlotte Casiraghi, Claudia Schiffer, Joely Richardson, Juergen Teller and Rufus Sewell as part of Louis Vuitton’s Art Talks series. He also made cracks about his personal life. “My parents kept me in the closet, and for the first 15 years I thought I was a suit,” he joked.

Later, guests sipped Champagne as they drifted into dinner, which was held in a marquee made from panels of Prince’s “After Dark” series of prints, which he created for Vuitton’s spring 2008 collection. “I’d seen a few of the pieces before, but not all together,” said Marc Jacobs, who lingered outside with a cigarette. “He’s an artist I feel a connection with on a primitive level.”

Meanwhile, New Yorkers gathered at Lincoln Center’s GalleryMet for the opening of Francesco Clemente’s “The Sopranos.” But those expecting to see Tony and his law-bending family were sorely disappointed. Instead, Mercedes Bass, John Currin, Rachel Feinstein, Fran Lebowitz, Paz de la Huerta and Sante D’Orazio viewed portraits of famous opera singers including Renée Fleming and Anna Netrebko. Afterward, guests made their way upstairs to the Metropolitan Opera Club for dinner.

Meanwhile at Espace, Fabiola Beracasa was celebrating her birthday at The American Friends of the Louvre’s Young Patrons Circle fete.

Downtown at Chelsea’s Milk Studios, Elijah Wood and Riley Keough partied with Joshua Jackson, Agyness Deyn and May Andersen at a benefit for The Art of Elysium. On sale were works from “Rebel Rebel,” a series of Warhol-esque silk screens by Mick Rock and Russell Young featuring rock legends Iggy Pop, Lou Reed and David Bowie. “It definitely takes balls to put one of these up in your house,” said Wood.

Keough disagreed. “This would go in my room,” she said pointing to a hot pink Bowie portrait. “My room has a lot of random s–t in it.”

That same night, San Francisco swells broke out the good stuff for the opening of the new De Beers boutique. Dede Wilsey dazzled with golf ball-size rocks on her ears, fingers, wrists and décolletage. “And these are just my casual diamonds,” she said.

Melanie Ellison, wearing a sapphire and diamond necklace designed by her husband, Oracle founder Larry Ellison, said she prefers vintage costume jewelry for everyday. “I’ve been finding old pieces by Elsa Schiaparelli and Chanel. I enjoy wearing serious diamonds, but vintage and estate jewelry has such character and a sense of fun.”

Beatrix Seidenberg, eldest daughter of Danielle Steel, wore a Fred Leighton diamond tiara. “I asked my babysitter to take a photo of me wearing it as I was leaving for the party, but she cut off the tiara,” she sighed.