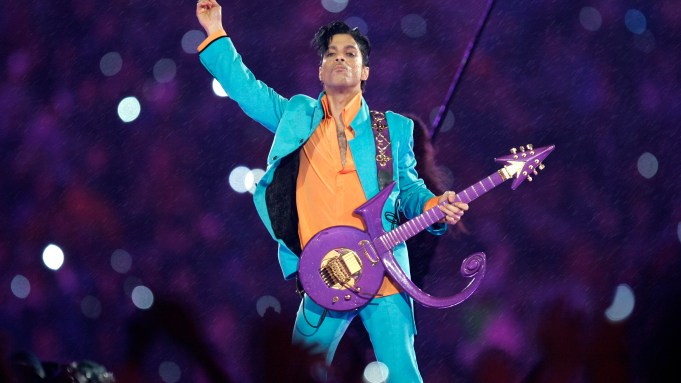 Prince’s unapologetically flamboyant fashion sense made him an icon as much as his music did.

Not one to conform to the tides of trends or social norms, his style — like that of David Bowie, who died in January – was gender-bending, but instead of androgyny like Bowie, Prince favored lace, frilly ruffles, bandanas and thick eyeliner. Designers from Tommy Hilfiger to Donatella Versace often cited the singer, who died Thursday at age 57, as a source of inspiration.

Though largely considered a recluse, particularly in more recent years, the singer sat front row at many shows during various collection seasons. His last such round was at the spring 2010 collections in Paris, when he sat front row at Chanel, John Galliano and Yves Saint Laurent. He also performed at the launch of Versace’s capsule collection for H&M in 2011. The designer was one of Prince’s closest fashion friend.

“I am crying,” Versace told WWD exclusively. “All my memories are coming back to me. I will always remember when he rented a club, only for him and me. We listened to his music and spoke about the young generation. The young people were so important to Prince. They have to follow the example he set, to believe in their heart, respect their own soul and never trade their own individuality. I will always love him.”

Matthew Williamson recalled Prince’s performance at his spring 2008 show. “He sat in the audience next to Trudie Styler [Sting’s wife] and my dad. As the beat kicked in, he got up from his seat and performed his track down the length of my catwalk,” Williamson said. “The audience was amazed to be in the presence of such a legend and nobody expected it. It was a once-in-a-lifetime surprise for all.”

Other designers also expressed their grief on Thursday. “A sad day. Prince was one of the most prolific and iconic artists of our time. He was influenced by Jimi Hendrix and James Brown who both fused fashion and music early on. His music and style sense will be in our hearts and minds forever. He will be missed by all,” Hilfiger said when reached by WWD.

John Varvatos told WWD, “Today, we mourn the loss of another musical legend and pop culture icon. Prince is someone that we will all miss — his music, creativity and style, but especially his unique approach to life and everything he did.  He was an true inspiration and one of a kind artist.”

While mostly remembered for his ruffled shirts and tailored jackets, Prince’s style ranged from flesh-baring and skin tight in the late Seventies and early Eighties to the flamboyance of the Nineties with wide-shouldered short jackets, sometimes embroidered or with sequins; ruffled shirts, and wide pants to a minimalist look from the late Nineties that occasionally bordered on the Space Age.

The performer’s publicist Yvette Noel-Schure confirmed that he died in his suburban Paisley Park residence during the early hours of Thursday. Though the cause of death has yet to be released, it was largely reported that Prince was battling a flu at the time of his death. He had recently been rushed to a local hospital in Moline, Ill., after his private jet made an emergency landing there on April 15. He was released three hours later and performed at an Atlanta concert the following day, assuring fans he was OK.

“Wait a few days before you waste any prayers,” he told the crowd.

The singer, who was on his “Piano and Microphone” tour, had also been forced to cancel two performances the week prior due to illness.

Born on June 7, 1958, in Minneapolis, Prince earned his unique moniker from a jazz band his father performed with titled Prince Roger Trio. He was signed to Warner Bros. Records as a teen and his career subsequently spanned more than 35 years, releasing a staggering 39 albums and selling in excess of 100 million records worldwide. The musician won seven Grammys and influential hits include “Kiss,” “When Doves Cry,” “Little Red Corvette,” and “Purple Rain.” His musical sound mixed genres, blending rock ‘n’ roll, R&B, funk, soul and pop — often on the same record.

The musician also trailblazed in the art of on-stage spectacle and sexual shock-and-awe. The 1984 song “Darling Nikki” off the musician’s “Purple Rain” album gained notoriety when its sexually explicit lyrics prompted Tipper Gore, then wife of Sen. Al Gore, to go before Congress to urge warning labels for records marketed to children.

While his legal name at the time of his death was Prince Rogers Nelson, the singer famously dropped his moniker in 1993 during a very public legal battle with Warner Bros. over artistic and financial control of his music. During the lawsuit, Prince appeared in public with the word “slave” crayoned on his cheek and, as an act of defiance, changed his name to an unpronounceable symbol — a move that spurred hundreds of jokes. Journalists began to refer to him as “The Artist Formerly Known as Prince,” a phrase that would enter the modern-day lexicon and be applied to numerous items that were “formerly known as.” The musician went back to Prince when his Warner Bros. contract expired in 2000.