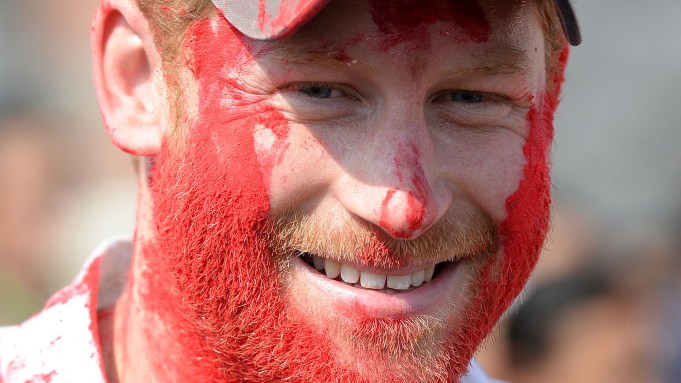 On the fifth day of his official visit to Nepal, Prince Harry got in a good old-fashioned paint fight.

The Prince took part in the celebration of Holi, the Hindu festival of color — an annual tradition of paint-fighting in the region — while visiting a secondary school in the foothills of the Himalayas on Tuesday. He was met by a mob of well-wishers who wreathed him with innumerable garlands around his neck before he was splattered with red paint. The head girl of the Gauda Secondary School, Juan Garung, 15, started the paint battle off, smudging paint on the Prince’s bearded cheeks, a tradition, before the royal responded in kind.

Students and villagers of the tiny hamlet Okhari had lined the Prince’s route to the school, still undergoing reconstruction after last year’s earthquake. Many adorned him with garlands, which the Prince thanked him for by bowing his head, placing his hands together and saying “Namaste.” Harry removed the weighty garlands after arriving to the school to take part in a volleyball game.