Christie’s London will open a door to the past of the Spencer clan when it puts a selection of castoffs from the attic up for sale. 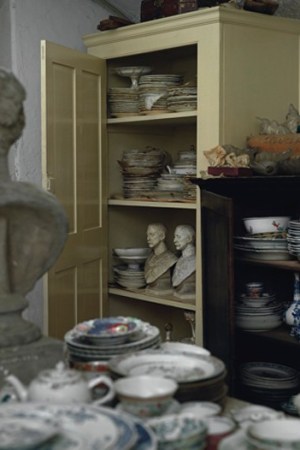 She may have been famous for her style and the hoard of fashion and accessories hanging in her wardrobe at Kensington Palace, but Princess Diana’s designer bling was no match for the glittering art, objects and furniture that her ancestors, the Earls Spencer and their wives, amassed over the past five centuries.

Christie’s London will open a door onto the distant past of the Spencer clan when it puts a selection of paintings, gilded furniture and assorted castoffs from the attic under the hammer in a series of sales beginning July 6.

The items come from Althorp, the Northamptonshire estate where the family has lived for more than five centuries, and Spencer House, the family’s grand, Neo-Classical London town house overlooking Green Park. The trustees of the estate said the money raised will go to “underpin the long-term future of Althorp.”

The gem of the collection is a Peter Paul Rubens oil painting, “A Commander Being Armed for Battle,” purchased by George John, the 2nd Earl Spencer, a famous bibliophile and Francophile whose wife Lavinia was pals with Marie-Antoinette.

The painting until recently had been hanging over a door in one of the main rooms at Althorp, one of England’s many stately homes that is inhabited by the owners — in this case, Princess Diana’s brother Charles — and partly open to the public.

“Until now, no one has been able to press their nose up against it,” says Richard Knight, Christie’s co-international head of Old Masters and 19th-century art, during a private view of the work, where he pointed out Rubens’ signature fat brush strokes and the “forcefully pained, foreshortened arm” of Rubens’ curly-haired commander.

Knight says the painting, which is “superbly preserved,” shows Rubens emulating his great Venetian idol Titian. It’s expected to fetch between 8 million and 12 million pounds, or about $12 to $17 million.

The 2nd Earl Spencer didn’t limit himself to collecting oil paintings. He and Lavinia also bought the Louis XVI commode and matching corner cupboards — decorated with Japanese lacquer panels — just after the French Revolution, in 1791. “As the Revolution kicked off, the French sold their furniture and cynical Brits bought it,” says Orlando Rock, director of Christie’s Collections Department, during a walk-through of the furniture room.

The second earl and his wife were simply adding on to a treasure trove of furniture and objects already ensconced at Spencer House. According to Christie’s, the house itself, which the Spencer family still owns but leases to Lord Jacob Rothschild, is “arguably the earliest and most important” Neo-Classical revival interior.

“These were groundbreaking interiors — it was cutting edge for the time,” says Rock of the house, which was commissioned by the first Earl Spencer and his wife, Margaret Poyntz — whose eldest child was the fashion-loving Lady Georgiana Spencer, later the Duchess of Devonshire.

Rock said the house was “a celebration of their incredible marriage,” with interiors and furniture inspired by the archeological sights they toured during their long honeymoon in Italy and the Mediterranean.

Many of the chairs at the house were designed by the architects John Vardy and James “Athenian” Stuart, and some of them will be included in the sale, including a set of four George III gilt wood open armchairs, a George II mahogany sofa and a pair of George II gilt wood stools.

In the Twenties, the 7th Earl Spencer, who was battling rising costs and falling agricultural rents, packed up much of that furniture and shipped it to Althorp, where it’s been displayed and stored until now.

Christie’s will also be selling less important but historically significant and often quirky items. The Spencer carriages — more than a dozen 19th-century horse-drawn carriages commissioned by the family and reflecting their upper-class status — will be included in the sale. The most expensive carries an estimate of 50,000 to 80,000 pounds, or $72,500 to $116,000.

And in a literal cleaning out of the Althorp attics, the sale will include lowly objects such as croquet sets, ice skates, dinner services, costumes, whips, swords, bellows and grain shovels, over which fans of the late princess will undoubtedly be fighting.