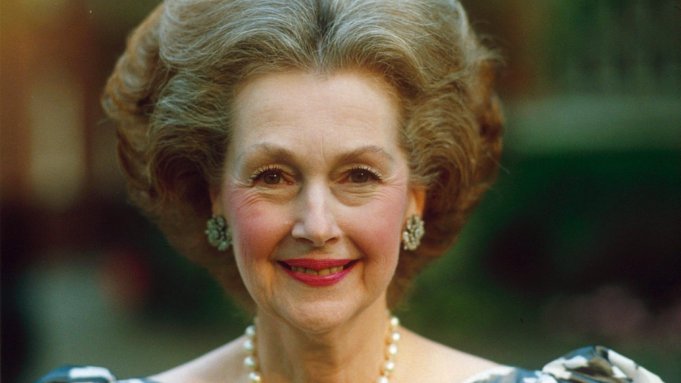 LONDON — Raine Spencer has died at 87 due to an illness, her family revealed Friday.

Countess Spencer was the stepmother of Diana, Princess of Wales and was married to Earl Spencer from 1972 to 1992.

Known for her bouffant hair, colorful outfits and bold scarves, the English aristocrat was a lover of fur coats. According to British press reports, the countess and Princess Diana had a complicated – at times frosty – relationship but reconciled later on before the princess was killed in a car crash in Paris in 1997.

The countess worked as a councillor at the British local government and with the Westminster and Greater London councils. She was also involved in projects with the British Tourist Authority, London’s historic buildings board and the Covent Garden Joint Development Committee.

After Earl Spencer died, she worked at Harrods, where she was a member of the board and was the director for Harrods International and Harrods Estates. She wore many hats at the retailer, from acting as an ambassador, to working on the airport properties and on the shop floor.

“Everyone at Harrods was saddened to hear of the passing of Countess Spencer,” said Michael Ward, managing director at the store. “She was part of the Harrods team for many years and we extend our condolences to her family.”

Through several marriages, she earned a range of titles including the Honourable Mrs. Gerald Legge, Viscountess Lewisham, Countess of Dartmouth, Countess Spencer and Comtesse de Chambrun.

Born Raine McCorquodale on Sept. 9 1929, she was the daughter of Dame Barbara Cartland, the equally flamboyant romantic novelist, and Alexander McCorquodale, a printing heir and Army officer.

She is survived by her three sons and a daughter from her first marriage.