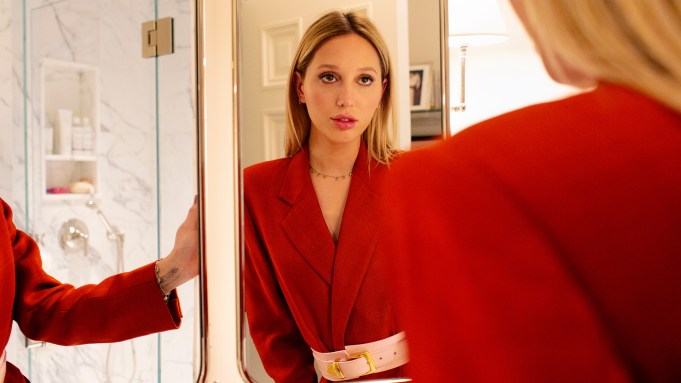 For her first fashion show, Princess Maria-Olympia of Greece and Denmark wore Stan Smiths (no, it wasn’t an Adidas event; yes, she cringes at the memory).

Then at age 18, Olympia had just moved to New York, and was thrilled — but terrified — to attend her first NYFW show on her own: Michael Kors.

“I was so scared — I had never gone to a show on my own,” Olympia says, sitting on a shag chaise lounge chair in her bedroom. “And Michael Kors is such a red carpet, like ‘boom, boom, boom.’ They’re like, ‘OK, we have hair and makeup coming for you at 7 a.m. We have a car, we have this.’ And they wanted me to wear these massive platforms — I was like, ‘Oh, my God. I can’t wear those. I’m not wearing high heels at 10 o’clock in the morning.’’

“There’s this picture of me and I’m standing there like… I didn’t even know what I was doing,” Olympia continues. “They’re like, ‘We need you to do the walk.’ I was like, ‘I thought I was just coming to watch a show!’”

The princess, now 23, has since become a natural at the New York shows, attending most every season except for when her NYU class schedule demanded she miss one. On this day, it’s shortly before Brandon Maxwell’s Saturday night show at the American Museum of Natural History, which is conveniently across the park from her parents’ Upper East Side townhouse where she is currently living (though she’s itching to move downtown out on her own soon). Olympia’s makeup artist has just departed, having applied body oil to her legs and a slash of lip color on her way out, and Olympia has buckled herself into her outfit for the night: a belted blazer dress from Maxwell’s last collection, paired with oxblood velvet Saint Laurent lace-up booties (even now, she’s still going off-book when it comes to footwear choices).

Born in New York and raised in London, the royal has always had her eye on fashion.

“I remember when my mother would get dressed, I would sit in her closet and watch her — I loved clothing,” Olympia says. “I always wanted to dress her when I was little, or wear her clothes. I do it now, too. I love watching people get ready and pick outfits.”

She moved back to New York to attend NYU’s Gallatin school, studying fashion business and marketing.

“I think my style changes — it’s girly, but then kind of edgy. If you see me in a dress, I’ll pair it with combat boots,” Olympia says. “I have a collection of combat boots. My mom literally will try to get me to throw every single one out and then buy me another one. She’s like, ’Let’s replace these because I hate them. I’ve seen them too much.’ I’m like, ‘Yeah, but I like the old grunge.’”

For this NYFW, her roster includes Monse, Zadig & Voltaire, Brock, Proenza Schouler and The Row.

Having graduated in May, she’s been taking her time plotting her next move in life.

“Which is, like, scary — I didn’t think I was going to be that person that graduated and was living at home and trying to figure it out,” she says. She’s interested in collaborating with brands, exploring the beauty world, and perhaps even starting her own thing one day.

Whichever way she ends up, she knows it’ll be in New York.

“I think it’s one of the greatest cities,” she says. “I was born here and I grew up in London. I love London, but I don’t think I need to be there right now. New York is very fast and everyone is doing something — everyone wants to do, and achieve and be great.”