The artist is working on a complementary book that "would share the information I wish I'd had, the kind of book you'd want to find in a doctor's office."

When French multidisciplinary artist Prune Nourry in 2016 was diagnosed with breast cancer at age 31, she asked herself the universal question, “Why me?”

It’s hard to imagine the prolific and peripatetic Nourry, whose projects include monumental sculptures and performances on four continents, retreating into herself.

“Last June, I got a phone call,” Nourry says in “Serendipity,” the film she directed, which opens Friday at New York’s Quad Theater and L.A.’s Laemmle Royal. “It was my doctor, and she told me I had breast cancer. The first thing everyone told me was, ‘You’re going to go to chemo, so you’d better freeze your eggs because when you go to chemo, it’s poison and you may not be able to have kids one day.'”

Nourry’s friend, the Academy Award-nominated filmmaker Darren Aronofsky, reminded her that as an artist, she can turn anything happening in her life into fodder for her work, so she reluctantly turned the camera on herself.

“In search of a complicity, I couldn’t have expected how much it helped me,” says Nourry. “And, finally, I transformed the movie into a kind of catharsis to maybe help other women. If not for Darren, I wouldn’t have done it. It was going against my way of working.

“I was introduced to [Angelina Jolie] by friends who are more on the health level, and put me in touch with with her,” Nourry says. “I wanted to meet her because at first, I thought I wanted to be treated in the U.S. She gave me the contacts for her doctors, who were great, but I decided to be treated in France. As two women artists and filmmakers we bonded.”

Before her illness, Nourry’s projects probed the mysteries of the human body, her curiosity fed by research and conversations with anthropologists and sociologists, and scientists. She methodically and objectively approached topics such as the bioethics of designer babies, sex preselection and gender imbalance.

Watch a Clip From ‘Serendipity’: ‘Cutting the Braid’

“Little by little, I realized [the cancer] had so many links to my past projects,” Nourry says in the film. “For example, I’ve been working for years on fertility with my 2009 ‘Procreative Dinner,’ a collaboration with a biologist, psychiatrist, geneticist and well known chef. I started seeing all these strange links between my past artwork and what I was going through.”

“The Procreative Dinner” was a set piece, mimicking the stages of in-vitro fertilization. The serious efficiency of waiters dressed in scrubs and wheeling each plated course to guests wearing hospital gowns was almost farcical. Beginning with le cocktail for in-vitro, guests flipped squirted ingredients into drinks with a turkey baster. L’entree’s frozen custard-like embryos announced the likely sex with a note. Guests used syringes to extract liquid ostrich-size eggs for the amniocentesis course. The finale was cutting the umbilical chord from small cheese babies.

The image of a raw egg in a wide, flat white bowl haunted Nourry following her diagnosis. “I finished with that one day not knowing I would lose my nipple,” she says. 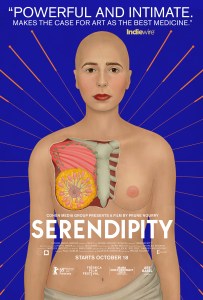 The poster for “Serendipity,” which opens Friday.

For “Holy Daughter,” about the issue of gender preference and sex-selection in Asia, Nourry immersed a statue of a cow in the Ganges River as is the custom of a holiday when cows are honored.

“Coincidentally, that’s the day with the most violence against women,” Nourry says. “I did it with powdered milk in my version. Did you know that the day a cow doesn’t give milk anymore she’s abandoned in the street [in India]?”

Nourry in 2016 was preparing a movie about “Terracotta Daughters,” her life-size army of 108 sculptures that’s a  version of the ancient X’ian army. She had just buried the soldiers in China when she got the news of her cancer. “My world fell apart,” she says.

Watch a Clip From ‘Serendipity’: ‘Sculpting’

Coincidences and parallels ensued in Nourry’s life. Belgian filmmaker Agnès Varda, a close friend of the artist, is seen in “Serendipity” at Nourry’s side when she cuts her long hair in preparation for chemotherapy. “It was a big complicity,” Nourry says of Varda, who received an honorary Academy Award and Golden Lion, for her influential French New Age films. “At the time, she didn’t know that she would have the same thing. Less than a year later, she got breast cancer.”

Nourry isn’t sure she believes in pure luck, hence, “Serendipity.” “It’s finding something you weren’t searching for,” she says. “At some point you need to have wished in that direction, and it can happen only if you catch it. There’s luck, if life brings something along your way. If you catch it, maybe….I believe in serendipity.”